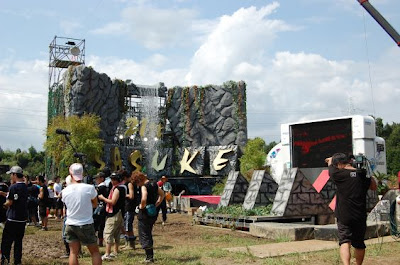 Whoot! Official Sasuke 21st Competition! ©Muscle Park Blog
While we wait for the actual airing of Sasuke 21 on TBS everyone and their mother check blogs and other sites for updates, spoilers (unlikely) and pics galore to wet our appetite for Wednesday, September 17, 2008! 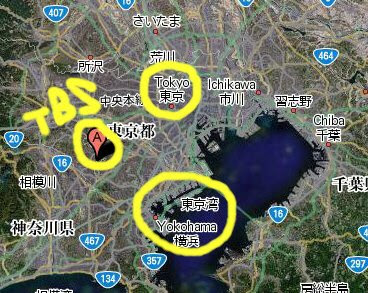 Getting bored at 2 am figuring out how far TBS is from both Tokyo and Yokahama.. can we say.. middle of nowhere? God I love Google maps...

TBS has finally put up their Sasuke 21 page on their website!

Incoming bablefish disaster!!!!!
attractions
It is the hero and Olympic gold medalist, while Japan's hope for a national flag fighters, or fishermen or firefighter? Beijing Olympics to lose a heated battle is here…. Olympic men departed the name of the ultimate survival of the attack, SASUKE,. The men will take the stage to fight again.
contents
1997 SASUKE the attack began, the ultimate survival of this fall in the 21 th anniversary.
The Memorial Tournament 20 times last year, from 100 FASUTOSUTEJIKURIA three and a third-round stage for only one of 100 people and challengers before a virulent. Also, the final tournament before the U.S. qualifying competition to get through the top U.S. Representative Lee MYUENBAGU Vai. SASUKE, home of the lost prestige of Japanese. (No pressure on the Japanese this time.. right? LMAO) This is really….
Playing bait (LMAO!!!!!!!! wtf???)
Olympic gold medalist in the Beijing Olympic Games in Beijing Beijing Olympic medalist Japan
Daisuke Miyazaki (Japan national handball, 0608 professional sportsman No.1)
Wacky (comic entertainers, athletes No.1 entertainment industry)
Dante (SoftBank expected GUY, Model)
Hiromiti Sato (NHK teenage brother's gymnastics)
Naoki Ikeya (Monster Box 23-stage world-record holder)
Katsumi Yamada (iron works part-time job, Mr. Sasuke)
Makoto Nagano (second in the history of complete domination, the 28th round captain)
Toshihiro Takeda (Ibi-gun, Gifu Prefecture, firefighters, the strongest in the history of firefighter)
Susumu Yamamoto Kuma (GASORINSUTANDOERIAMANEJA the only reward for perfect attendance)
Hitoshi Aya Swan (Inba village office work, Inba village hero)
Lee MYUENBAGU Vai (final tournament before the contestants, all-American) (poor Levi... no one gets his name right...)
More, all 100 people
word (yes.. just .. "word".. to your bruthah? :D )
[Producer], Yoshiyuki
SASUKE Currently, the world's most exciting. This is also a national qualifying tournament is through the strongest line-up. And the Beijing Olympic medalists are going to war. Exactly what the world stage is now set to determine the champion. Steel Magic Castle will dominate the world or the name of TOPPUASURITO Athlete of the departed?
Beijing Olympics to be competitive, hot four hours to deliver. (Daaaaaaang skippy :D )
September 17, 2008 from 6:55 Wednesday, according
▼ performers
NARRATOR: Kobayashi Kiyoshi
Current Condition: Keisuke Hatta (TBS announcer) Wataru Ogasawara (TBS announcer) Reporter Yuriko Takahata (TBS announcer)
Staff ▼
Manufacturing: Monster 9 TBS ： Overall producer: Ushio Higuti： Director Producer: Yoshiyuki： Construction: Makoto Huzii
As a direct result I've updated.. again.. the "So excited" post with all the names compiled so far...
Wow.. okay! That was interesting. Sad to not see Akiyama listed (cry..... I wanted him back..) ECSTATIC that Bunpei is back!!! Hysterical that they are now making this the tournament where Japan gets it's prestige back LOL. What a way to drum up hype for this!
Okay.. now to catch up on the last 2 days of whirlwind blogs.. Daisuke Miyazaki with 3 Handball teamates getting ready for Sasuke 21! @Daisuke Miyazaki's blog (P.S. Confirms his number in the line.. he's 97 - he was 1998 in Sasuke 20)
Okay not only did TBS finally confirm Daisuke is definately going (it looked like he flew in with a few people then flew right back out to get back to already scheduled games).. he blogged on it . So happy when people take pics of their own and post them for others to enjoy :)
(incoming bablefish disaster... Note that he types with a LOT of graphic icons that are not here.. go to his page to see what I'm talking about.. half of these finish with cute animated icons as opposed to words)
Sept 17 (Wed) "SASUKE" to enjoy! ：
Thank you in Sapporo 。
Yesterday (Monday) is moving day, but,
Iwanaga Urawa boars and my wife is four "SASUKE" for the recording,
A different team and later returned to action in Tokyo
This time, with four people, so
Osaki and team handball OSOL hard,
Appeal has been
They each
The result is September 17 (Wed) "SASUKE" I look forward to please、
Today is the feeling to be switched,
September 13 (Saturday) for the Ryukyu Corazon warfare training.
Osaki's next game is a home game, so
Sincerely big cheer. 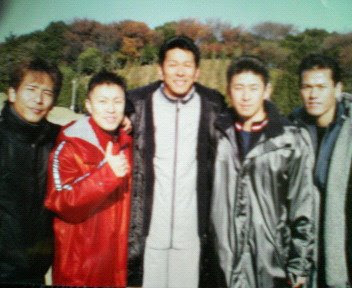 Masaki Nomura has been posting on his blog a couple times about Sasuke.. Let me go through them so far. Back in August 12th, he posted in his blog this message: "You've got season, he's doing it. Put the training and fighting spirit! Let's look at the Olympic Games, her motivation, I'll keep plugging (-_-;) 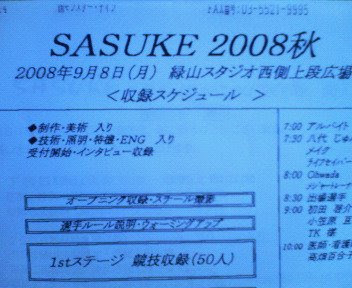 His ticket? Why do they always show the 8th when it was Sunday the 7th? WIERD!!! ©Masaki Nomura

He's been training (at the very least since August) for Sasuke 21. The first set of pictures from Sasuke 21 actually came from his site again. The one above and the 2 below. 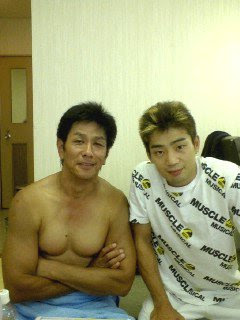 This one had me thinking for a bit because Naoki's blog only showed Muscle Musical things and not Sasuke (though that's usually normal from him anyway.. he rarely posts anything on Sasuke). It wasn't until TBS posted their lineup for the 17th that they finally put to rest the rumor that he was not going. He IS going and here's proof in a picture. His Quote: Massage by trainers. Care is also important because (-^ ^) this, we have a young and bearded Baron. With TANOSHIMI (-^ ^)

Poor Masaki-san.. he's already getting treatment.. I assume before his run? Funny how there is a tent for this stuff.. I'm sure they are working that aaaaaaaaaall day long! LOL.

Takahashi Mitsuomi - he's Satoru Akashi or Bouken Red from Super Sentai (or Power Rangers to me :p ) put an entry on his blog today as well about Sasuke! 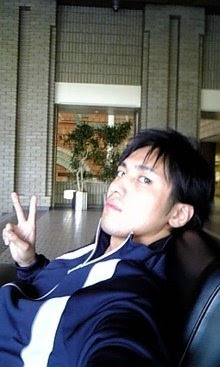 From what I gather from the comments section that filled up quickly.. he's been working on his grip strength! Oh I hope he does well this time :)

Olivia Munn from G4's Attack of the Show ©Olivia Munn

Last up is Olivia Munn's blog. She posted on Sunday before her run and at that time she was quite.. well.. worried.. mind the language at the end.. quite frankly.. it's about time she gets how hard this course is.. I mean.. really.. she doesn't even know the real name of this course.. /bangsheadonwall.. passes popcorn.. well .. they got their wet t'shirt contestant...

To briefly suck all the joy out of the Sasuke 21 festivities...

I watched a G4 special she hosted on Kunoichi and she totally BUTCHERED the names of nearly every all-star.

I ask you, what business does she have COMPETING??
*simmers down*

Other than that, thanks for posting all the info to date. I too am beside myself with joy at the news that Bunpei is returning:)

But no joke, that Munn chick had better not lay one finger on my all-stars. I will dangle her from Mt. Midoriyama by her hair.
;)

Hey this is the most composed I've seen ya :) Heck.. ME TOO! Uhgh.. people dismiss my reaction to her as "oh you are just jealous" and I can't stop laughing at their complete ignorance. Oh well.. If Colin made it to win a show he'd never seen and go on to make a fool of himself on international television.. why not a flake from a show that is made of nothing but YouTube clips? So what if she can't pronounce any of the names (including the title of the show...) and knows nothing of the history of the show.. taking a spot of someone who really really really wanted to be there.. nah.. I'm not bitter :p

Then again.. there are commedians there that show up for business opportunities and nothing else :p But at least they KNOW the show.. LOL Oh well.. My frustration with the whole thing is that I'll see more of her than the actual competitors of the show that actually train for this.. which makes me dread November like the plague..

At least we have next week :D /passes popcorn..

olivia munn was raised in japan, and speaks fluent japanese, with all the stupid people that compete on the show, you are going to complain about her? whatever

LOL all the people on the show are not on Sasuke :p And besides.. if she speaks fluent Japanese she sure fooled me.. she hasn't actually pronounced any of the regular contestants name right. At all..

I'd say her history in Japan is irrelevent. My beef is that she displayed no knowledge of the show she is going to be on when most likely hundereds of die hard fans were denied an opportunity to compete.

But I agree that there will most likely be worse contestants to complain about. Who knows? Maybe she'll do a good job...

Okay, I wrote a whole great sarcastic comment and blogger ate it. So I won't try to re-do it. Will just say, "Lovely post Elsie dear."

Now I'm going to go pout about my lost comment. It was really 'pithy'. :)

Wow!!!! You people really need to let up on Olivia Munn. You act like she desecrated someones grave. She went on a japanese tv show where people run around on a obstacle course and fall into muddy water. It's not the Olympics. She was having fun trying something a lot of female american celebrities wouldn't even think about.

So she's not a reguler contestant or trained for 50 yrs to bet the course that doesn't give you the right to stick your nose up at her for trying. Judging from those screen caps there were a few women from japan that weren't so hot either and your not giving them a hard time.

The sad thing is that the people at Sasuke where more kind and open to her running the course then anyone I've seen post on this blog.

That is so true, Elsie. As you know I cannot stand Olivia Munn, but you are correct, she did something that a lot of other celebrity females would not do. More power to her. I just wish she'd quit being so gross. :) I find it difficult to look at her.