What can you in 3 Minutes?

In early February we were made aware that Monster 9 was creating another show for TBS in Muscle Park - a new show called "What can you do in 3 minutes?". They had open calls and even described what was going to be taped (Here and Here). Since then we realized that Mr. Sasuke Katsumi Yamada was going to take part in this show. He even showed up to do his bit back in early February, 2009. 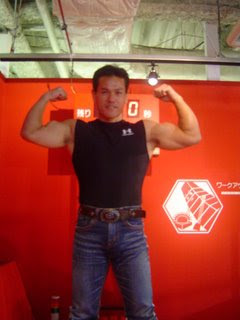 Today Muscle Park updated their website and Monster 9 updated their website giving us the times for this show and Sasuke 22. They list a few names on there including Katsumi Yamada but it also names Makoto Nagano!
3 Minutes is on Wednesday, March 4th on TBS (Japan)
18:55 to 20:54
(6:55 PM Japan local time) - 2 hour show
(Edit USA times - Daylight Saving time change is not until the weekend)
4:55 AM Eastern Daylight time
1:55 AM Pacific Daylight time

For those who want to watch this live - Please refer to this post please about 2 options available for that day! TVAnts is the only program of the 2 that you can reliably record.
Please remember.. TBS shows DO NOT RERUN OR REPEAT BROADCASTS - if you miss it you have to rely on someone else having had recorded it for you!
Posted by Arsenette at 8:54 AM 12 comments:

As I had blogged before, the official Sasuke 22 airdate on TBS is Monday, March 30th (7 AM Eastern Daylight Time). Recently a friend of mine sent a couple gifts to Makoto Nagano and he wrote her back today with a couple pictures and a thank you note. Here is her blog about the gifts and the email he sent her! In the note also he mentioned when Sasuke 22 is going to tape!

Monday, March 16th!
It's a bit earlier than anticipated but then again TBS now has almost 2 weeks to edit it down. So as of this date it's now less than 3 weeks to Sasuke 22!
Posted by Arsenette at 9:40 AM 13 comments:

Sasuke 22 is right around the corner! It's just over a month away! Just like last year.. I've been chanting this song LOL. Looks like there will be a bunch of us waking up at early morning (7:00 AM Eastern time) on Monday, March 30th to watch Sasuke 22 air live.

Again just like last year Ube and I will be scouring the Internet to find what we can. With Sasuke Maniac off the air.. we have to rely on blogs, websites, etc. to find out our information! As of today we have a few people already confirmed and/or rumored to be coming - As I get more information I will update this page:

TVAnts (Like Television Antennae)
There was a post in the post board I love going to - Sasuke Maniacs Forums! Ube - whom I adore dearly :p - posted a great link to an option to watch Sasuke!!! It's called TVAnts (Like Television Antennae). It's .. Chinese I think? It also had more implications than I thought! We can watch JET-TV as well (Taiwan station that shows the second best Sasuke - and the majority I've ever seen on the internet - they only subtitle the TBS broadcast.. something G4 should learn..).. Either way it seems every Saturday they show Sasuke! One of the founders of the Sasuke Maniacs site has been looking for a way to see JET-TV for the longest time and we finally found it! As a result I'm adding the information on to my TVU and You page.
Long story short.. It runs like the others did where you have to have it running in the background.. To get TBS just type "TBS" on the search bar and it gives you the results (with JET-TV you just type "JET" and it comes up that way). Unlike the others you right click on the picture on TVAnts and chose "properties" and it gives you an address to put in the streaming network thing. Then open up VLC and put THAT address in there. Voila.. follow instructions like the last time to record it (just remember to hit "View locally" or you won't see jack through the VLC window. There is another way to do it without using VLC.

That is - the limits of physical King.

King physical limit its unique charm, so that all participants madding like addicted generally want to continue to exceed their own limits, and even appeared in each type must be a frequent visitor to the players, which is different from physical ordinary people, and can be straight into the second and third clearance, the daily life is in order to limit physical King unremitting efforts to master what is known as the maximum physical Wang All Star players.

Wang physical limits of each and every All Star player has its own limits of philosophy, not only in the annual competition, more impact on their lives!

King of the limits of physical whether to write new history, a second full-breaking clearance ill?
I'm like totally inspired now! LOL My wang has no limits..

Addendum.. We just checked the JET-TV feed.. it is JET-TV.. but inexplicably 4 months behind??? The TBS feed is the same (thank goodness) but it's like 2 minutes behind KeyHole but perfectly viewable.

Update - March 13, 2009 - (3.13 for Keyhole is now out - this now gives you a resizeable window!. Also as of this date TVAnts seems to be the best solution in terms of quality recording and viewing.

For those of you who WATCH stuff through my favorite program to watch Japanese television, Keyhole there was a problem where it didn't even want to load! Problem solved. January, 2009 they changed servers and updated the program to 3.12.. so if you have the earlier version of Keyhole and you cannot get it to work.. download the new version (3.12) and it should pop up (it automatically deletes your previous installation so that works out nicely!)

SASUKE 22 Announcement - Monster 9
.
I was very happy to receive an email today from Monster 9. And it was in English :D I had asked if there was going to be a Sasuke Trial like there was last year and this is the information I was given.

Thank you for your inquiry.

There will be the 22nd SASUKE this spring. And the trial will be held soon in Japan, but the details have been up in the air. Also, the US residents have very little chance to get in the trial in Japan. You may wanna contact to G4, that is the US TV station, about the trails in the US.

I am not sure the next SASUKE will be on air in the US there, but it is on air in Japan on 30th March.

I know the chances through Monster 9 are very limited in terms of USA participation (we all know that and that information has been the same throughout the years) so it was not a surprise to know that part. I am happy to see they changed the airdate though. Maybe Monday , March 30th will give a better rating this year! That way we can keep Sasuke on TBS and we can continue to enjoy the show! Here's hoping they have a great tournament and people see it!

For those who want to watch this live - Please refer to this post please about 2 options available for that day! TVAnts is the only program of the 2 that you can reliably record.
Please remember.. Sasuke DOES NOT RERUN OR REPEAT BROADCASTS - if you miss it you have to rely on someone else having had recorded it for you!
Posted by Arsenette at 6:32 PM 23 comments: