Sasuke fans are STILL the best fans in the world! 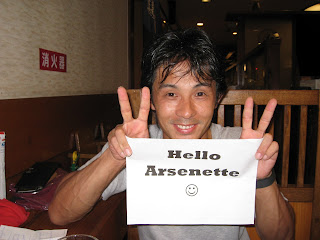 
July has been great!  Though I'm not the one visiting Japan.. LOL  As I blogged before.. there's now a trend!  Matt Iseman started a funny trend that quite frankly I love! It started out with Nagano and Matt posing for a pic to say hello to me back in April (during ANW4) and then earlier this month Yuuji posed for mahoro also saying hello to me and now Pittsburgher got me two photos: one with Shingo Yamamoto and one with Yuuji again! 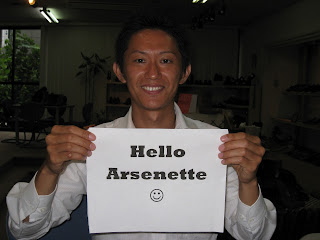 
I'm honored and thoroughly thrilled at the fact that this is happening!  It's really sweet that they were thinking of other fans along with visiting Sasuke stars during their respective vacations.  Though I'm sure Yuuji is thinking that "Hello Arsenette" is a new internet meme.. LOL  I'm totally real!  Seems he likes taking serious pictures so he had to be coaxed to smile.. LOL Thanks Yuuji for being such a good sport!  Thanks to Pitts for persevering as well as the earlier time to meet didn't pan out.  Though it's good that we can at least talk to him via Twitter even if some of the language gap can be severe.  Still. he was ready... check out the freshly waxed brows! Mwaahahahaha ehem :)

In addition to the photos, Pitts has been taking videos (when she remembered LOL) and she got this one for the fans from Shingo!  Yes, he's reading off a cue card but he did pretty good! For those who still are having issues understanding him .. he says:

"Hello, my fans.
Thank you for supporting me.
I will try my best in the next Sasuke.
Until then, I will golf."

For those who don't understand the golf reference.. he's become quite an avid golfer entering tournaments, etc. when he can.  He talks a lot about it on his personal Facebook page. What's cute is that this came after he was absconded to do multiple rope climbs when he was recognized at a local gymnastics club!  And no he's not sloshed drunk (I had to ask.. LOL).. this was after a full day of work, playing with the kids and then finally sitting down to dinner late into the evening. LOL  Thanks to everyone who made this happen!  Behind the scenes planning was in overdrive and even then it almost didn't pan out. Lord knows Mahoro understands that too as she missed her first meeting with Yuuji as well! Oh and for the record Pitts will write a more detailed account of her trip (and Sasuke fangirl trip mwahahahah) after she returns to the USA.  I'm happy she took time to share what she had as quickly as she did during her vacation!  Btw, if I get enough of these.. I'm totally redoing my Rambling Rican banner! ahahaha
Posted by Arsenette at 3:04 AM 7 comments: 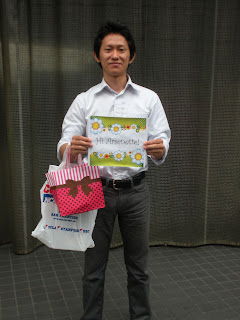 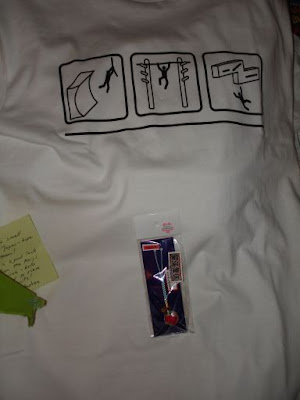 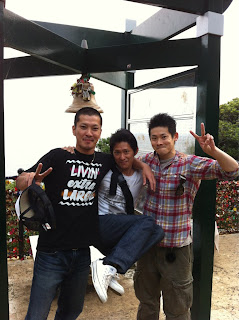 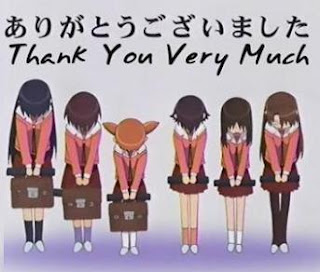 Thank so much to Mahoro888 and of course Yuuji Urushihara for sharing in their fan experience with me :) I'm happy that such a special fan moment even happened and even more for sharing the experience with those of us who might never personally get the opportunity.
Posted by Arsenette at 5:41 PM 7 comments: