As I had mentioned before, JET TV announced their Sasuke 22 showing (in 2 parts - May,16th and May 23rd, 2009 in Taiwan). They usually have a great set of pictures so I went to check if they did. They didn't disappoint. :) Even if it is the Home of the Eight All-Stars™... LOLThey have a full section just on Sasuke 22 and my favorite part is their Photo Gallery. 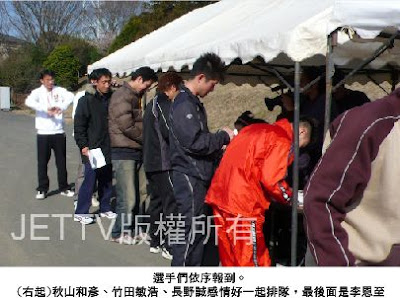 All-stars sign in for the day - everyone get your green piece of cloth!

I love how most of the pictures are relaxed. Personally I prefer pictures like that over the posed ones. I get better captions that way too :p For this one Lee is in the back and in the middle are Nagano, Takeda and Akiyama in that order. Seems to be very early in the day because the line is not long at all. 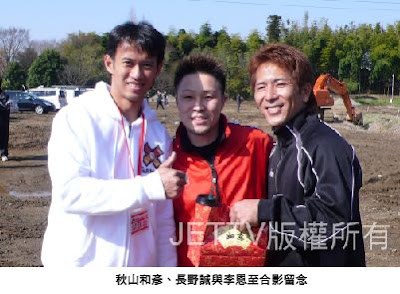 Lee Yen Chi, Kazuhiko Akiyama, Makoto Nagano
Obviously since this is Taiwan you will see a lot of Lee Yen Chi. Which is fine with me! :) Seems as if he's been their only competitor for a long time (Sasuke 17, 18, 21 and 22). They must be really happy since he's very consistent! I like him because he's just a classy guy and very supportive of everyone. 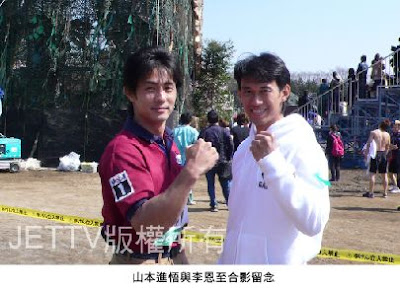 Shingo Yamamoto with his strange do.. with Lee 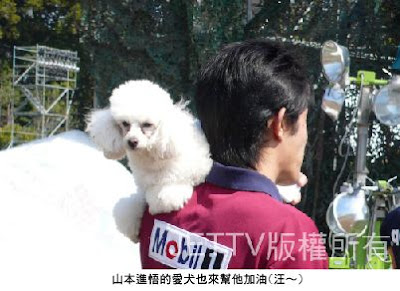 I have a new nickname for Shingo.. it's Paris Hilton.. apparently I thought that his wife was the only one that carries this dog like a lap dog.. I was wrong.. Shingo is Paris as well.. I swear if I see him put this dog in a bag I'll shoot him.. Still.. I couldn't stop laughing when I saw the picture because I didn't picture him to be the type.. ya know? Anyway.. The dog's name is "Sasuke" and quite frankly not sure how old he is but he's getting up there.. he's had this one for a long time now. (P.S. his wife was there too even though she didn't appear in the broadcast of Sasuke 22). 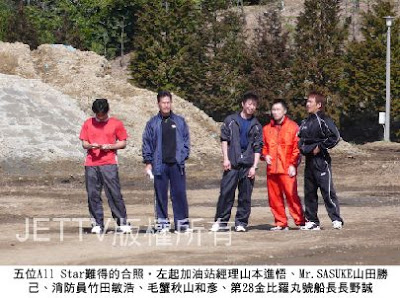 Okay bear with me here.. you know I have a list of "stupid thing I notice™" right? Doesn't this picture say more than 1000 words? Okay we already know that not all the All-Stars are very close. Heck outside of Sasuke, few of them even ever get together. Between distance and work it's damn near impossible to get these guys together in their off-time (especially Nagano being out at sea 90% of the time). So.. inevitably there are small groups within the All-Star group that was created by TBS/Monster 9. You see it don't you? 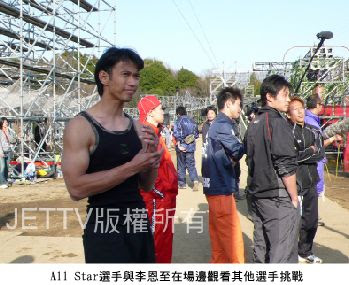 This was after Shingo's run since he's already dressed and hair blow-dryed.. Takeda's already changed to his uniform pants. LOL it's not often I see Akiyama with a "Shingo-style™" backwards baseball cap. I mean he does wear it that way but not often. Either way there are more pictures in the gallery :) I hope they add more after the broadcast. I can see they tried their best to not spoil anything. For us in the USA.. we still have more than a month until G4 gets their head from up their butt to show Ninja Warrior 22.. it WAS supposed to be May but they pushed it back to June.. late June at that.. /sigh .. oh well at least I saw it.. Taiwan is this weekend!
Posted by Arsenette at 2:47 AM 6 comments:

I always check to see if there are any more things to add to the original post of the Maguro Festival for 2009.. Thanks to the same person who gave us the pictures from before.. I went back today to see if they added any more pictures but they did something even better! We have videos!!

As usual you see Yamada.. taking his time.. methodical.. but he does finish the course even if he did miss the wall once..

Shingo also missed the wall but he totally crapped out on the rope!

Akiyama did it faster and didn't miss a beat! He was the first to clear the wall on the first try!

Because Takeda isn't competitive or anything.. nah.. who said that? He pwns the course faster than anyone so far.. (wtf is up with that high pitch cackle? I swear he's giving Nagano a run for his money!)

Which leads us to hotdog number 2.. Nagano blows them all away and pwns the course faster than anyone with no mistakes.

Awesome to see the videos of the guys! Whoever did the camera work had a perfect viewing range and was high enough to get the whole course at once! So happy people are good at videotaping and are kind enough to share with others!
Posted by Arsenette at 8:09 AM 8 comments:

Original poster for May 6th ©Muscle Park
Muscle Park is going to be a friggin' hopping place to be (as well as Tokyo Decks) from Saturday, May 2nd through Wednesday, May 6th.. well.. technically started Wednesday, April 29th with Wakky but who's counting? :p Either way for those who don't know.. it's Golden Week in Japan. What does that mean for Muscle Park? A cubic boatload of guests and merriment! You already know I'm interested in a couple people.. Seems like only 3 of the 6 All-Stars plus a few extras to boot. 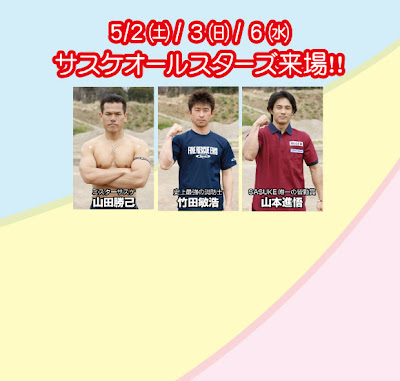 Updated picture for May 2nd, 3rd and 6th ©Muscle Park