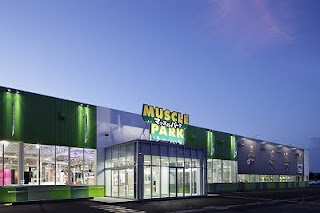 Good news everyone! My last Muscle Park blog mentioned that Chitose Muscle Park 千歳マッスルパーク closed its doors after just one year on Sunday, August 28, 2011. There was a message posted that they hope to come back better than before.. now it all makes sense. Thanks to twitter and a rumor going around in mixi that Chitose's park was going to reopen and it was written in an article I was able to find the article in question.

Tomamin wrote an article on the 17th mentioning that someone else bought the building that went vacant at the end of August. The company is called US.Mart (it's actually a chain of convenience stores) and they are based out of the Mie Prefecture. They have renamed the Chitose Muscle Park into "Muscle US. Land". Thanks to a couple of people including Lost in Ube who did a lot of legwork in finding out more about this venture including finding their new Muscle US Land blog! 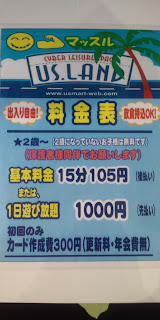 One big surprise is that not only the building will be reopened.. but the attractions inside will remain the same and even adding other things from their other convenience stores like massage chairs, video games and Internet usage.. but the bigger thing for us Sasuke fans is that they are including the Sasuke Park! The biggest difference will be the pricing structure. Gone are the days of a la cart.. it's now pay a price per 15 minutes (105 yen or about $1.30 under current conversions) with unlimited play. They will have a members card also available. 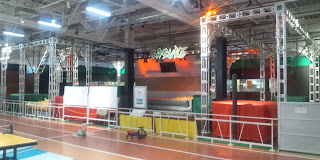 THIS will help the people traveling to play on Sasuke Park. In the past you had to pay per each chance.. now they will have more time to spend on the obstacle section. That should attract more people with an amusement park set up. The outlet mall where this is located also posted a couple press releases about the change. As we find out more information I will post about it!

P.S. For those waiting for the Navi blog it should be up by tonight :)
Posted by Arsenette at 2:06 PM