So excited for Sasuke 27

With less than a week to go Ube's doing a great job in confirming who is a part of this event. For a list of confirmed participants go to Lost in Ube's blog. Given how late it took for TBS and/or Monster 9 to actually update their pages with the air-date of an event that happened almost 3 months ago.. I haven't had a chance to create my So excited page like I normally do. Chiyo-chan is going to have to wait to do her dance for another time. In the meantime air-date information for both Navi and Sasuke 27 tournament can always be found on that page. 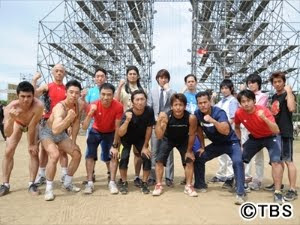 Oh.. P.S. Don't ask me for more time conversions.. or technical questions as to where and how you can see it.. Check SMF.. ya'll can research for that yourself :p
P.S. I've decided with Sasuke 27 coming around the corner so quickly I don't want to burn myself out doing another blog.. so for those waiting for a blog update for the Sumo Special.. it won't be incoming. Yamada didn't pass stage one but did manage to get Sasuke to trend on twitter .. so hopefully that brought back viewers for Monday's broadcast. Only time will tell. Lord knows TBS has done absolutely nothing to promote Sasuke.. even Monster 9 hasn't even updated their own official website with the EXISTENCE of the tournament..

Edit: Added a fantastic article on Sasuke 27 by the Japan Times. According to the Article G4 won't air Ninja Warrior (sans Americans btw) until March, 2012.
Posted by Arsenette at 4:35 AM

Shocking poor advertising . A well done to yamada for the twitter trend if only twitter was as popular as mixi is there