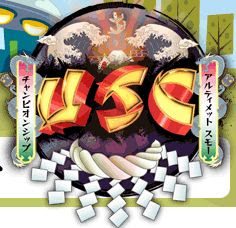 Ultimate Sumo Championship!
Needless to say I got the shock of my life this afternoon when I went to do my normal Sasuke news related searches since we are 2 weeks from the Sasuke 27 official TBS airing in Japan... I kept coming up with people joking about how Yamada was going to get his ass handed to him next week in sumo.. but they didn't have any details.. then with more research I kept seeing this celebrity sumo tourney that had a few people I recognized.. including Yamada.. Even full blogs dedicated to it in great detail. 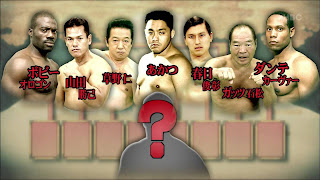 Celebrity qualifying for the Sumo tournament!
I recognized a few faces. Right off the bat from the left I recognize Bobby Ologun ボビー・オロゴン, next to him is Sasuke All-Star Katsumi Yamada 山田勝己 (Mr. Sasuke). Skip 2 people more and you see Toshiaki Kasuga 春日 俊彰 from the Comedy duo Audrey オードリー then on the far right is Dante ダンテ from Sasuke 21. 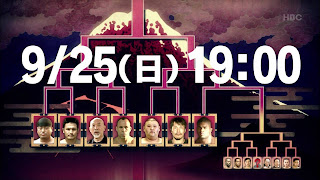 For those who are planning to watch this it's next weekend. That's 7 pm local time in Japan so that's 6 am Sunday morning in the East coast and 3 am for those living in the West Coast . I'll see how the tourney goes before I figure out what I will blog about it :p According to the picture.. the main event is the big bracket on the left that you see and the little one on the right is the celebrity portion where Yamada and the rest of the celebs are to try to get into the main draw.

Full bracket - Yamada is on the bottom left of the picture 2nd from the right.
There were several articles written about this. This one went into extreme detail about the tournament filled with all the matchups and names. I was a bit surprised honestly since I never even knew this existed. Seems they had another one before where Kinnikun participated in but lost in his first match in qualifying. 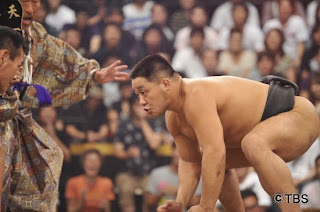 Yamada on the far left getting ready for his match
On one of the TBS pages it also mentions that the announcer for this is none other than Veteran announcer Keisuke Hatsuta 初田 啓介 whom we know from Sasuke and also Sportsman #1. Nico news pretty much said the same thing plus reiterated the lineup. I'm sure in the next week I'll see more news on it.. mostly stuff repeated so I'll just wait until next week to see the matches. 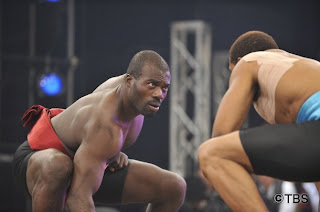 Bobby in the red getting ready to face Dante

What I'm hoping for is for TBS to finally start running Sasuke 27 commercials. It's painful watching show horrible a job they are doing in promoting this show.. I mean seriously.. this sumo show there were dozens of articles but Sasuke.. nothing... /sigh.. I hope they have the presence of mind to air a commercial during this.. I mean seriously it would be a week away at that point.

Anyway.. for those who are curious how this is going to go.. I found a Youtube video of the earlier one that happened this year.
Posted by Arsenette at 4:31 PM

Yamada doing sumo. THIS I have to see!

On a side note, I would totally do this if given the opportunity.

Little bit odd but any publicity is good publicity