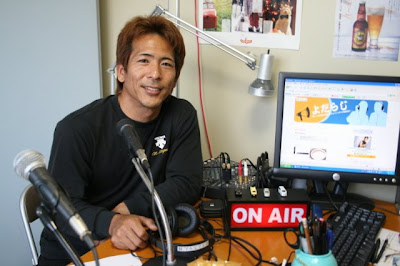 Makoto Nagano 長野誠 posing for cameras during his interview in April 19, 2009 ©yodaraji
As I mentioned earlier in early March, Makoto Nagano 長野誠 was to appear in his 4th interview with yodaraji - which is a radio station located in Nobeoka (which absorbed Kitaura, Nagano's hometown) on the east coast of Miyazaki Prefecture. Being of course the local celebrity of the region he's been afforded the opportunity to be on the show whenever he wants :) 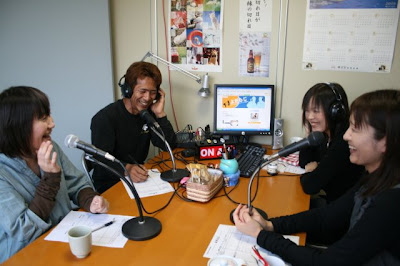 Nagano with Yodaraji hosts during the taping of the show - April 19, 2009 ©yodaraji
Thanks to my friend chaki for another wonderful translation! {Note that this is not a word for word translation but a general overview of the audio that can be heard also on the website}
This April will be the third year of Yodaraji! How wonderful! Yeah us!! But I have to admit that we haven’t done anything THAT exciting and spectacular. I wonder whether we’d just get older this way… Hmmm. Anyways, to celebrate our third anniversary, we have a special guest today.
I know there are listeners who have been waiting a long time to hear this interview. So here is the Strongest Fisherman from Sasuke, Makoto Nagano, Yodaraji’s permanent special guest. 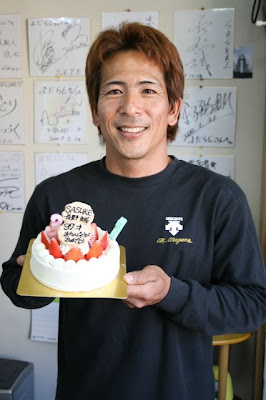 Makoto Nagano posing with a birthday cake that was given to him as a gift by a local fan - April 19, 2009 ©yodaraji
This is Nagano’s fourth appearance on Yodaraji radio (all previous interviews are still on the website - top right of the main page). One of the ladies starts calling him Nagano-kun, which infers familiarity, like if he is her younger brother and everyone laughs. These last six months lots of things have happened to me even in my personal life. Then in March, there was Sasuke and I feel like just apologizing to everyone for my result. This Sasuke (22), the All-stars were all eliminated before my turn. I was so nervous going into it. Then I thought “Oh well, if everyone fell in, it’s okay this time if I do too.” (They groan and protest. “Last time you promised you would reach the final next,” she reminds him. And he says he’s forgotten and giggles big-time.) 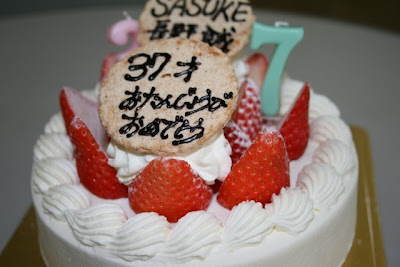 Nagano's 37th birthday cake given to him by a local fan - April 19, 2009 ©yodaraji
He talks about the new area, saying that he was nervous looking at that new obstacle (presumably the Slider Jump). He goes on and says there are people practicing very hard for it all year around. Then he laughs saying there is pressure coming from “the next generation” as the announcer called it. Lady points out (Keisuke) Hatsuda (Sasuke Announcer) kept repeating “Is it time for the changing of the guards?” implying that the All-stars should be replaced… She acts offended. Nagano giggles again.
Lots of people say that but it only makes us want to try harder. People who don’t know can quickly say we are getting too older but I feel I can still do it. I will train hard for the next Sasuke and prove myself. Lady asks whether there is going to be a Sasuke in the fall. He says that according to the information he has access to, the fall Sasuke is not determined yet. He really hopes there will be a next time because he doesn’t want Sasuke to end with that last performance. 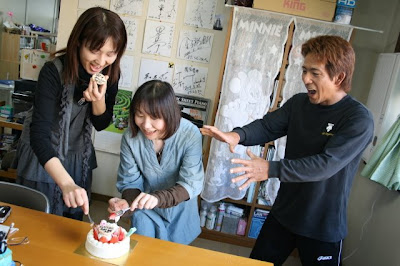 Yodaraji hosts playfully stealing the cake trimmings before he even gets to cut the cake - April 19, 2009 ©yodaraji
The broadcast of Sasuke coincided with his birthday (March 30th) and he had really wanted to do well because he just got married (January, 2009), his baby is due (June, 2009) and he wanted to do well at Sasuke as a birthday celebration. He says he is 37 and feeling old. She points out that he nows enters the Around 40 group (it’s a new thing in Japan, people around 37-43 are called Arafo (Around 40) and instead of acting old, they are very active, getting married, having babies, starting companies, going to school, staying in shape, having affairs, etc.) He laughs. 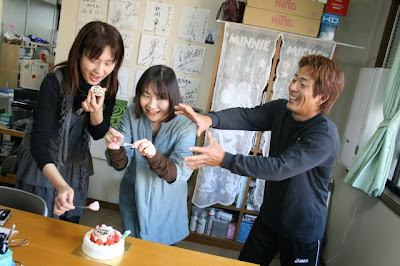 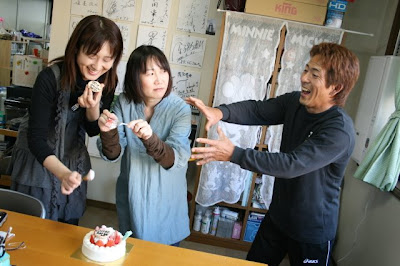 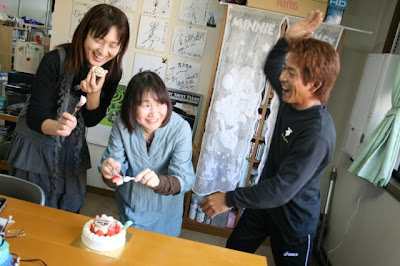 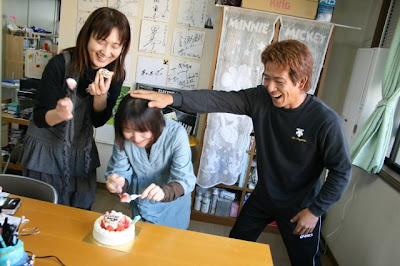 Yodaraji hosts being playfully scolded by Nagano for stealing strawberries on his birthday cake before he sliced it - April 19, 2009 ©yodaraji
They talk about his fans. That he has fans wishing him well. He says his baby is due June 20. And that it is a boy. They have thought of a name for him already. She jokes and says it must be Sasuke. Then she suggests Yasuke, which is his father’s name and everyone laughs. (In Japan, passing on names of family members is not done.) Nagano says that he’ll leave the name a secret. He says he’ll let everyone know when the baby is born. They are excited he is agreeing to appear on the show again. Then they talk about promoting 18th Annual Maguro Festival. (Which is this weekend April 25-26 in the city of Kushikino, near Kagoshima, Japan - they will have 2 demonstrations a day (from 11 am - Noon and then again from 2 pm - 3 PM on both Saturday and Sunday). Nagano doesn’t have much background information on it but talks about the All-Stars appearing and that there will be a set for people to try. They talk about the food there. She wants him to treat her. He says they should buy him a tuna burger. He promotes Takasui fish (the company he fishes for). They talk about the reduced highway toll charge. They don’t have the system installed. So they ask to hitch a ride. He says he’ll be going straight from the fishing boat. 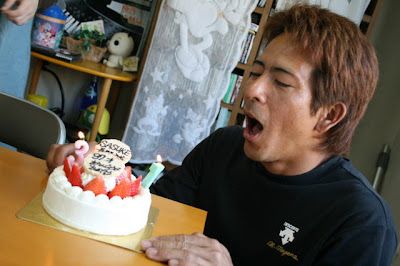 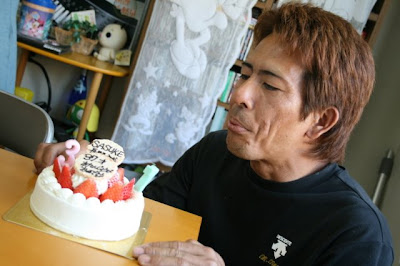 Makoto Nagano celebrating his belated 37th birthday (his birthday is March 30th) - April 19, 2009 ©yodaraji
Finally, a message for your fans around the world. I get lots of support fan mail from America and other places. Thank you very much. I would like to do well at the next Sasuke so please keep supporting me.
They talk about how he can complete Sasuke in front of his baby. She suggests a black bib for him. He says Maybe a black tank top too. Laughs. End of interview.
A local fan sent a birthday cake. The pictures are of the ladies stealing parts off before it’s cut and Nagano scolding them. (It’s their personality to treat guests in fun ways that makes the show popular. I quite like them myself.)

Again THANKS a billion to chaki for the quick translation! Interesting on the future of Sasuke being in doubt right now. :( For the stupid things I notice™ menions.. did ya'll notice he got new clothes? Probably free swag from sponsors.. but he FINALLY GOT RID OF THOSE BLACK PANTS! :) His pants are now new Aasics and his shirt is has to be a gift from Descente.. I mean it has his name now! :)
Posted by Arsenette at 2:48 AM

Great blog, as usual, Elsie. Nagano seemed like he was enjoying himself. I hope there's a Sasuke 23. I'm still counting on Shingo and Yamada to make it to the top.

Thanks for posting great blog. Appreciated it a lot. We can only hope that there will be Sasuke 23. I'm very optimistic because 22 did score very good rating so we'll see what happen. I thought Nagano will have girl since he already have 2 boys but I was wrong. :p Around 40 thing sounds very interesting to me. But heeey, as long Nagano make it to final again, I'm very happy. XD

When Nagano walked in, one of the ladies said "Hey Nagano-san, you got new clothes!" Mwhahahahahaha

Aahahahhah ! It gives me sick pleasure to know she noticed :) Heck I think that deserves a fruit basket! LOL Maybe I'll email the producer again :) Mwahahahahhahaha Thanks for that it gave me a great smile!

Aww thanks Tiger! I do hope the All-Stars all do well again :) I'm sure for them it must be frustrating!!

Hey MG :) I do definitely hope they come back again .. I reaaaally at least 1-2 more tournaments if possible.. even if it is to see Nagano-chan sporting a blank tank top!

Chaki, that's too funny! Elsie, I really hope Sasuke will continue for a while, and I hope the boys do better next time. I think Yamada needs to speed up a little and Shingo needs to slow down a little. I guess he can't help being fast. He seems to have an unlimited supply of energy. Y'know, we could probably solve the world's energy problems if we could figure out how to harness Shingo's energy. Anyway, I hope all 6 of the boys compete in Sasuke 23, and that all 6 clear the first stage. I hope they won't give up. I recently wrote to Shingo to thank him for being my inspiration and to encourage him to keep competing. I'm planning to write to Yamada to thank him and encourage him, too. I wish all of the guys the best.

Geez.. this is what I get for not checking old posts! Thanks Tiger for the blog address :)