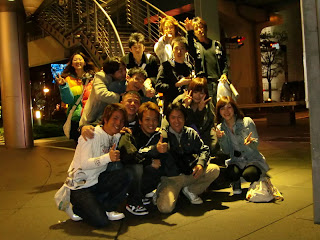 Now that I am done blogging about Sasuke 25 let me take the time to update everyone on what's happened so far. Just to let you know. I will do a whole post on the state of Sasuke due to the last ratings of Sasuke 25. There was a great discussion about it on SMF and I wanted to dedicate a whole post to this to address possible ideas to save the show from cancellation. Everyone here knows I loved the broadcast. It was just a shame not a lot of Japanese viewers even turned on to TBS to see it. 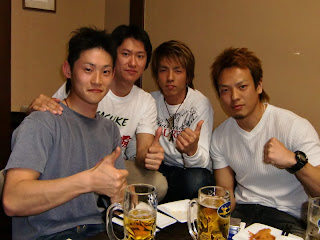 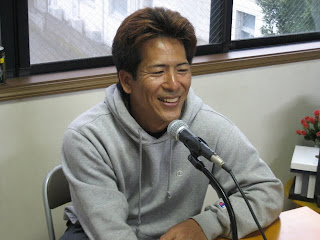 All-Star Makoto Nagano 長野誠 during his interview on April 5, 2010 ©yodaraji

In the middle of blogging Sasuke 25 I ran into the radio interview of All-Star Makoto Nagano 長野誠 with Yodaraji Radio . I've since gotten a longer translation for it so please feel free to read more on the interview here on my blog. There he discusses his Sasuke 25 run among other things. This marked the 5th time he was interviewed by the radio station and the 1st in over a year. 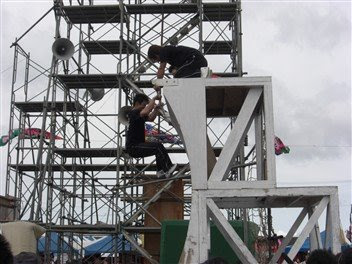 All-Star Toshihiro Takeda 竹田敏浩 jumping on the wall while All-Star Makoto Nagano 長野誠 watches - Maguro Festival 2009 ©personal blog
As the same as last year (2 blogs on it - one with pictures and one with video) the 19th Annual Maguro Festival (第１9回串木 野まぐろフェスティバル) will take place later this month in Kagoshima - April 24-25, 2010 in the city of Kushikino. Nagano will be there as usual (no word on which additional All-Stars/guests will appear). They will have 2 presentations - at 11 am and another at 2 pm on Saturday and on Sunday the times are 11:30 am and 2 pm. I hope to get more videos and pictures of the event. 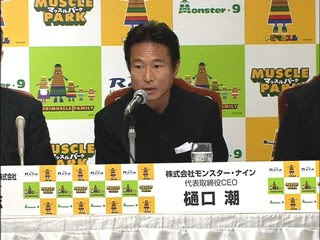 Monster 9 President and CEO - Ushio Higuchi 樋口 潮 during a press conference for Muscle Park - Chitose
As I wrote back in early March there is an expansion to the Muscle Park family. Monster 9 is opening Muscle Park - Chitose (which is in Hokkado prefecture) in July. On March 25th in Sapporo, Japan there was an official press conference where President and CEO of Monster 9, Ushio Higuchi was present. Monster 9 had their coverage here and there were 2 additional articles. One was written by Walker Plus and the other by Tomamin. Seems Hokkaido (Chitose)'s park will be bigger than it's Tokyo(Odaiba)'s Counterpart and it will be housed in it's own building just outside of a major mall outlet. It is approximately 4000 square meters (over 13,000 square feet) (which they mention is 1 1/2 times larger than Muscle Park in Odaiba) in size and will house 20 attractions. No details as to how large the Sasuke Park will be or what obstacles will be available. When there is an official opening date I will post about it.
Posted by Arsenette at 3:38 AM

Love the Urushihara party pics!! Love the t-shirts they made and signed for him. What a really close knit group. Someone posted a comment saying that surely the next finalist is in that close-up group photo. You should do a special post just on him!