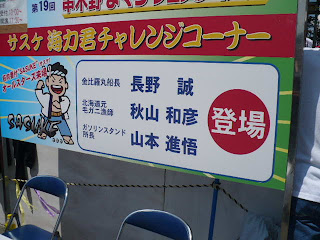 Sign during the festival featuring All-Stars Makoto Nagano 長野誠, Kazuhiko Akiyama 秋山 和彦 and Shingo Yamamoto 山本進悟 ©shimojikonashi
I mentioned this before but the Maguro Festival took place just this past weekend. And just like last year (2 blogs on it - one with pictures and one with video) the 19th Annual Maguro Festival (第１9回串木 野まぐろフェスティバル) took place Kagoshima Prefecture - April 24-25, 2010 in the city of Kushikino. 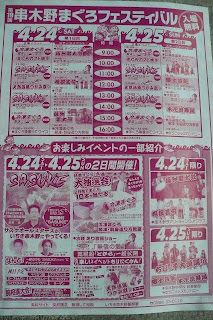 There were only 3 All-Stars this time (All-Stars Makoto Nagano 長野誠, Kazuhiko Akiyama 秋山 和彦 and Shingo Yamamoto 山本進悟). They had 2 presentations (11 am and 2 pm on Saturday / 11:30 am and 2 pm on Sunday). Thanks to those who found the videos and pictures from SMF and of course thanks to the bloggers and videographers who posted pictures and videos so quickly this year! 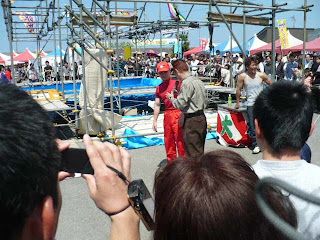 Kazuhiko Akiyama 秋山 和彦 being interviewed ©shimojikonashi
According to the poster they had the following obstacles: 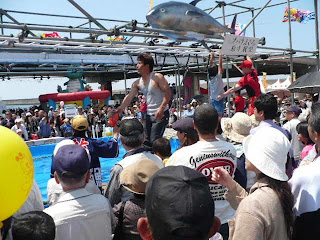 This year's event was actually a lot smaller from what it looked like via pictures and video. I can only imagine with the economy and all but I'm happy it at least took place. Seems they also had a pretty good crowd for the demonstrations! So that's very good news. 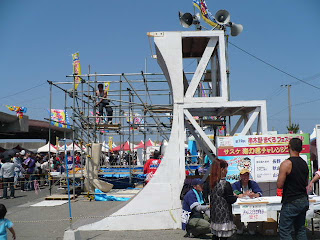 Makoto Nagano 長野誠 climbing the frame on the left ©shimojikonashi

I was very happy to see a lot of pictures up on blogs so quickly this year! Usually it's so hard to find these. This one was cute because it took me a couple seconds to realize Nagano was climbing on the frame. 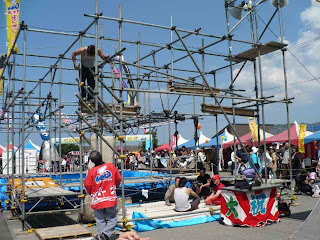 Makoto Nagano 長野誠 getting the attention of everyone below him ©shimojikonashi

This particular picture is just so cute. The guys down the bottom in a circle (Shingo with a gray shirt showing his back to us and Akiyama in red) seem to be chillin' while Nagano who's up on the frame again seems to be trying to get their attention. 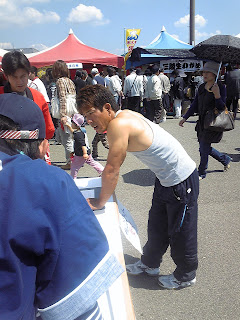 Makoto Nagano 長野誠 ©syuichidc2
This by far is my favorite picture.. mostly because it shows a constant state that Nagano is in.. slightly annoyed.. LOL I'm sure some logistics crap as usual since it is hard putting these events together in such a short amount of time. Still.. it's a cute picture :) Nagano seems to be getting a Farmer's tan just like Shingo.. Though Shingo's is more extreme (see video below). 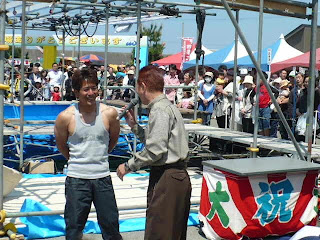 Btw the location of the Sasuke course is a lot further up as well.. seems to be right up against the entrance of the festival! Prime location this year! 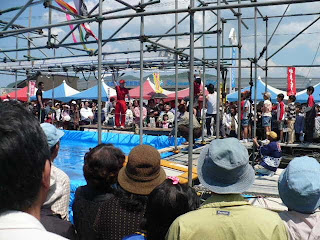 All-Stars during a demonstration ©shimojikonashi

I'm told that Akiyama was unable to do the demonstrations this year. Not sure if he was injured but he at least wasn't feeling well. I hope he gets better soon! Nice for him to show up for fans though. His trip to the south of Japan is epically long.. 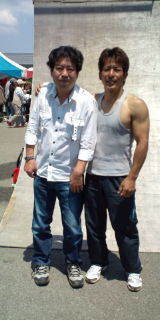 Thanks to all the blogs that posted pictures! It's a lot of fun to see the event. Seems they also had a gorgeous day as well! Which is good because the area had a lot of rain recently.. 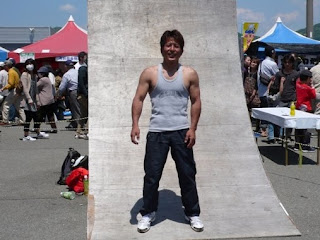 Makoto Nagano 長野誠 ©Personal Blog
Just like last year we got some awesome videos from the same person. Their blog follows all things from Kushikino so that's perfect :)
Makoto Yahagi video ©syuichidc2

The first video was quite the surprise! Makoto Yahagi 矢作誠 - I call him "Moody".. and if everyone who has been following my blog knows.. he's been trying to get on Sasuke for a looooong time now. It's nice he was invited to be part of the demonstrations this year given that Nagano couldn't get the rest of the All-Stars to fill the line up. Unfortunately Moody still has issues with the Salmon Ladder.
Itou video ©syuichidc2

Next one is also a surprise.. sorta.. Yoshiki Itou 伊藤圭槻 He is from the Miyazaki prefecture (Nagano's home prefecture) and we all know him as the kid that won the MRT Beach Sports Competition back in late July, 2009. We saw his run in Sasuke 23 but he was cut from Sasuke 24 and Sasuke 25.
Shingo video ©syuichidc2
Sporting the total Farmer's tan (lol) Shingo Yamamoto 山本進悟 did very well on his run! I wish the video was a little longer (especially at the beginning to know what the crowd was laughing about) but then again.. this is Shingo so it could have been anything!
Nagano video ©syuichidc2

Makoto Nagano 長野誠 was showing off again. Doing the obstacles correctly and very fast. He built the thing dangit.. he better be better than everyone :) LOL j/k. Very happy to get the videos though and in such high quality!
Posted by Arsenette at 9:29 PM

Wow. thanks for all the footage. Sure looked like fun. They are lucky to always have good weather for the event.

Yay!!! Thanks for the pics and videos! I would love to go the festival - it looks like fun!

Whoops I had to fix Moody's and Itou's videos.. I had the wrong ones up.. stupid cut and paste...

Yeah they are lucky to have great weather!

Poor Akiyama. I hope he's feeling better now. I'm glad he got to go. And Shingo, too. It's nice to see him getting more involved with Sasuke-related events. Still laughing at his tan line. His torso is so pale that at first I thought he had on a tank top. From what I've seen on some of the cold-weather Sasuke tournaments I get the feeling that Shingo is kinda hot-natured, so it must have been warm that day for him to be going shirtless. Usually it's Akiyama and sometimes Nagano who do that.

Nice :)
LOL yeah Shingo's farmer tan was priceless...I thought he had a tank top on as well, Tiger!
Too bad for Akiyama, I hope he's feeling better. Happy that he made it there tho :D
The Slightly Annoyed Nagano...ROFL...

http://ninjawarriorobstacles.blogspot.com/
Come here! If you have ideas for new obstacles this is the site where you can show your ideas!