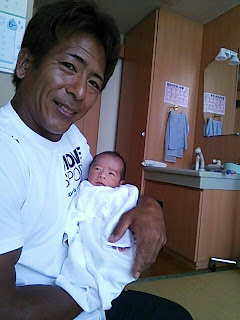 
We welcome a new addition to the Sasuke All-Star Family! As many of you have been wondering, we've been in Nagano baby watch for a few months now.  I'm very happy to say that his new son arrived!  Born on Sunday, June 16, 2013.  His name is Taiou (たいおう) with his name in kanji as 太皇 Which means Great Emperor.  As you know the couple have a 4 year old son named Kaiou 塊王. You may recall that his brother Kaiou also has King in the name in hiragana but chose a different kanji to have more of a mystical meaning.  Seems the Nagano's are into monarchies! 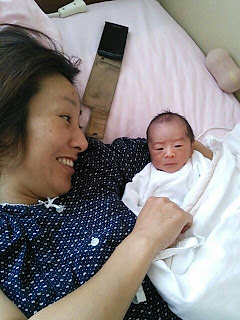 
Sasuke Legend Makoto Nagano 長野誠's wife Asami 阿紗 美 posted on her Facebook back in January that she is expecting another child. Over the past couple of weeks there were a few health scares with the baby.  Taiou came a bit premature (Due date was in July) but is a strong baby to be allowed to be outside of the incubator. 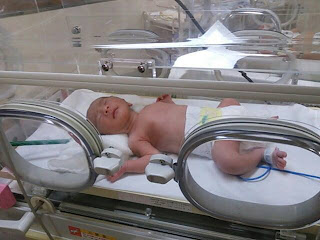 He weighed 2442 grams (about 5.4 lbs) and pretty tall at 45.5 centimeters (about 18 inches) which is very tall for a preemie. I'm so thankful that despite some scares that mother and son are doing just fine and are expecting a full recovery! I'm so happy that they were able to share photos so soon after the birth.  Welcome Taiou to the worldwide Sasuke family!
Posted by Arsenette at 10:53 PM

Looks very cute almost the same weight as my first child and he was two weeks late.

Wow so that is a good weight for a preemie :)