After the excitement of the 2 minute Trailer for Sasuke Rising (officially airing 2 weeks from now!) we have more Sasuke viewing news!  This Sunday in Japan we have the airing of a half hour special commemorating Nagano's trip to the USA to see American Ninja Warrior (ANW4).  The program is called "SASUKE海外進出" or "Sasuke Overseas".  According to the TBS Schedule for the 16th it is THIS Sunday, December 16, 2012.  It is a half hour program.


According to the writeup for the show on Yahoo, it is indeed a half hour show about Nagano's trip to the United States to see American Ninja Warrior 4. Given that it is only half an hour I'm assuming it's going to concentrate on Nagano's trip specifically.  We'll see once it airs. Depending on the content I'll decide if I'll do a full blog post on it or just give highlights. 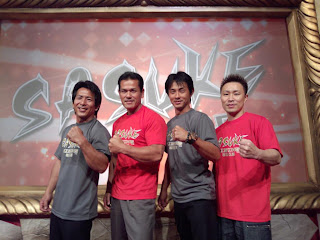 Another program coming up is the highly anticipated Sasuke Rising and any events tied to that.  It seems that they indeed created a special for the All-Stars (taped Sunday, December 9) that will air sometime during the Special and/or the tournament.  (Edit: Official) date for December 22, 2012. Also, duration of that special is 1 hour. 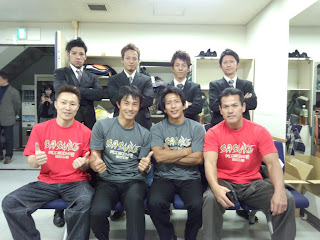 As I mentioned numerous times, the new tournament is now officially called "Sasuke Rising" (but for all of us it's Sasuke 28 by chronological order).  This is the last tournament for the Sasuke All-Stars.  5 of the 6 Sasuke All-stars were scheduled to compete (Bunpei Shiratori being the only one not competing). So given all of this.. The above picture freaked everyone out (the boards just lit on fire).  Why? Because of what it could possibly mean for the future stars of Sasuke now that the All-stars are being retired.  Of note is one person far back left row.  Asa in particular.  I for one am happy but for those who are not familiar with him he was re-introduced to us in Sasuke 27.  IF this is indeed the future lineup of Sasuke Stars this makes me very happy.  I'm hoping more are in that group but for now I'm happy with the current inclusions.  The Future seems very bright! 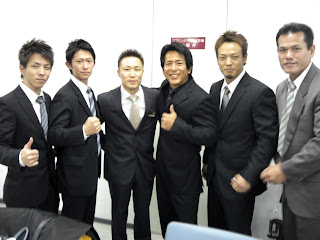 
Edit:  Thanks to TBS updating so quickly the times for Navi and Sasuke Overseas. In addition they put the list of all 100 competitors participating in Sasuke Rising!  That's never happened before! I'm so excited! I'm VERY Excited!  Btw.. they look GREAT in Suits!  Friggin' awesome photo!
Posted by Arsenette at 12:29 AM

They do look good in suits like Japanese James bonds

I'm happy they are putting this much effort into it as well :) I look forward to it!