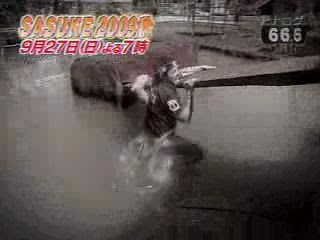 Shingo getting pwned.. (from Sasuke 22)
Officially 2 days left for Sasuke 23 to air! I'm getting excited! Just checked the schedule for the 27th on TBS and this is the Bablefish disaster for it.. LOL

14:00 (Which is 2 PM local time)
ＳＡＳＵＫＥ新旧対決完全制覇はどっちだ!?今夜決着!!家族で楽しんで下さい
SASUKE fully won against old and new plague? Settled tonight! Please enjoying fam
LOL wtf.. Plagues?? ROFL!!!! Anyway.. I'll be watching! This show is Called Sasuke Navi and it's a 1 hour preview for the tournament. I expect to see Sasuke Trials and a bunch of Nagano Baby stuff from the summer. 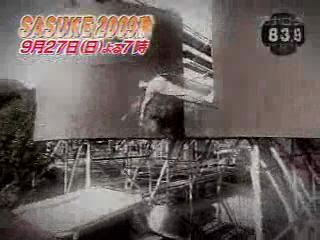 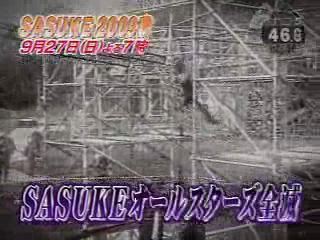 Nagano falling from the sky.. (Sasuke 22)
Oooooookay.. LOL Anyway.. the reason for this post! Dearest Ube has done it again :) He noticed on the TBS Schedule that they were going to show a small preview (or glorified commercial) for Sasuke 23 on Friday, September 25 (around 11 pm his time in Japan). So I got up early expecting like a 3 minute preview at that since it shared time with another show (and it was weeknight past 11 pm so I expected a lot of other commercials as well). This is what the preview said on the schedule for September 25th:
23:09 (which is 11:09 PM local time)
こちら葛飾区亀有公園前派出所＆ＳＡＳＵＫＥ
(Park in Katsushika Ward Police Station here Kameari & SASUKE)
あす19時こち亀最終回
(Tomorrow at 19 times last flathead turtles) 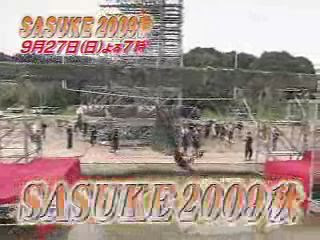 New obstacle! (This replaced the Circle Hammer from 22) - Dunno the name yet but it's a couple sheets and you slide across this long pole..
WTF.... flathead.. turtles? LOL I love Bablefish disasters... ANYWAY OH! Ube's blog for today is HERE!! Anyway as Ube said.. the preview was epically short.. it was just under a minute long. The commercial (that is what it was..) was preceded by a long epic emo drama about some guys.. brooding.. emo guys.. anyway.. last scene had a puppy in it :p OH and before I forget.. the channel was friggin Japan>TV Fuji on TVAnts.. I know.. wtf.. but it worked! 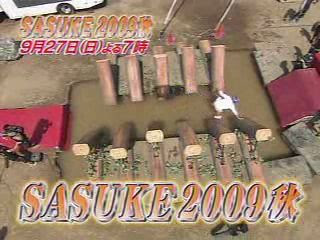 The preview itself was epically short.. just under a minute long. Started with the deathy by's of the All-stars (they only showed Shingo, Takeda and Nagano) and then went to introduce the first 2 obstacles then show a couple spoilers. 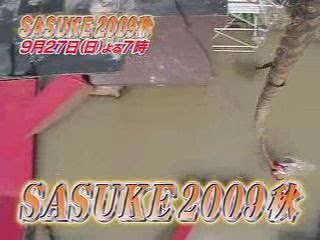 Death by Half Pipe Attack! Still there for Sasuke 23 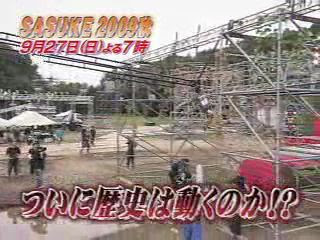 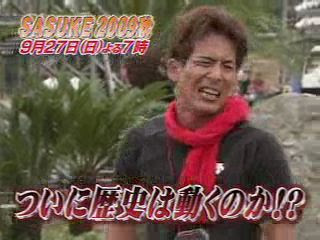 Nagano is not amused :p Hmm.. who could he be lamenting? 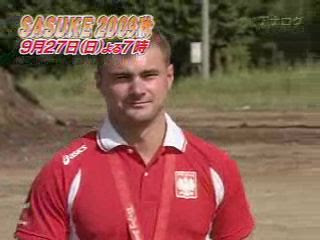 Leszek Blanik of Poland レゼク・ブラニク - Gold medal winner in the vault at the Beijing Olympics
Next is a lineup of people starting with Degawa and then goes to a list of Olympians and Comedians I had to wait to hear from Ube to know who they were.. LOL Hm.. checking my own list to compare.. 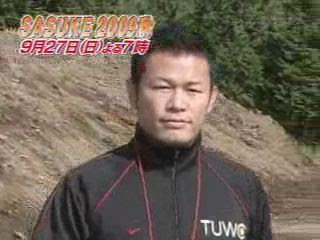 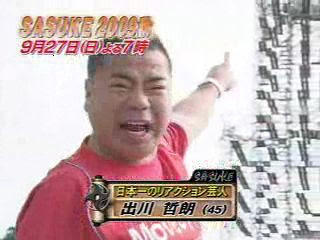 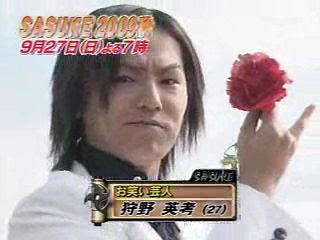 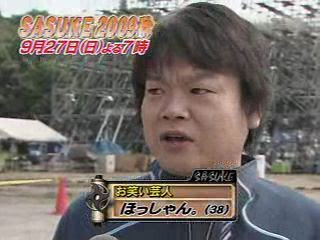 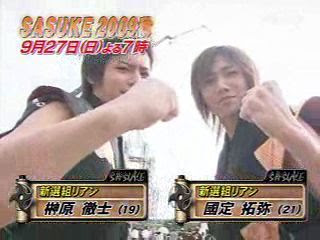 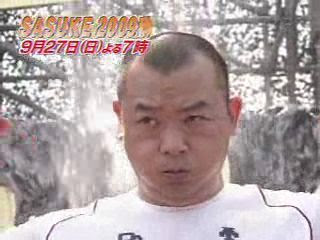 One of the guys from TKO (according to Ube) 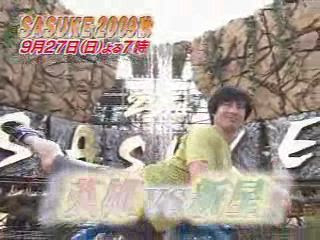 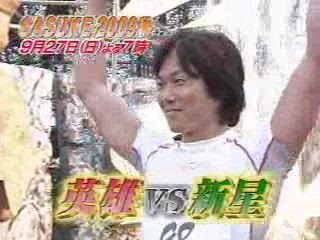 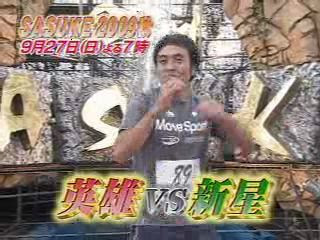 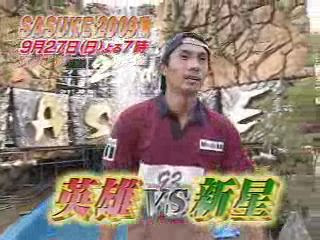 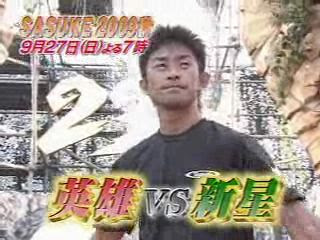 Toshihiro Takeda 竹田敏浩 just got his eyebrows done again :p Not so cocky this time I see :D
Hmm theme "New Stars" vs "Heroes"! This ought to be interesting. Old vs New. All-Stars vs Chumps.. LOL Just kidding.. I'm psyched! 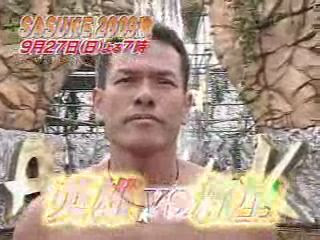 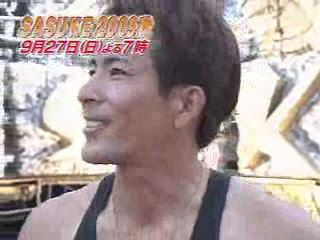 Makoto Nagano 長野誠 Looking fab... (P.S. I see the necklace/rope thing is back this time around.) 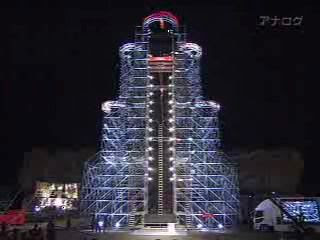 Ah yes :) Major spoiler.. "come see the Final tower" (and yes someone is climbing it.. no we can't see that very well.. and it could be a tester.. ) I'm so totally not going to try to figure out who it is :p 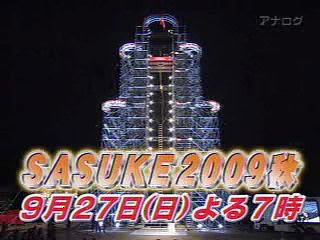 Already said a couple of things on ube's, but I noticed one more thing with your screenshots.
Shingo's cap...You're doing it wrong!

LOL I hope his cap falls off this time :) (Hint if you know what my husband's theory on his hat is :p )

Yeah, let's hope that the hat falls and Shingo doesn't. I'm going to be mad if he wipes out in the first stage again.

Help! TVAnts isn't working! If anyone can provide me with any help on viewing and saving Sasuke 23, contact me at scopedknife@hotmail.co.uk please!

Unfortunately TVAnts did NOT show TBS at all. Many people missed the broadcast because of it. At the last minute someone was able to stream a paid version of a TV streamer called WIST but even then only 50 people were allowed by the program to watch it. I was so frustrated.