Taping for Kunoichi 8 is now complete :) and now we get to wait until until Wednesday, October 7th to see Kunoichi 8 on TBS. Thanks Ube for finding this! Most likely it won't be until next year when G4 will even air this.. which is as usual, very disappointing. 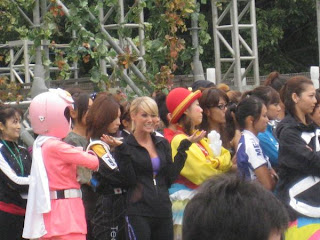 Lining up for the group shot for Kunoichi 8 ©Sarah Jean Underwood (thanks scnoi from Sasuke Maniacs for finding this)
Over on Lost in Ube he's been very hard at work in getting information about who was in the show this year. We know already that some of the previous contestants from the past (including the current champion) would not be there. It's nice to see that so many new faces along with veterans of the show will be there! Especially 田中真帆 Maho Tanaka take center stage with the loss of Ayako Miyake.

Lost in Ube reporting again :) (yay)
Anyway, according to this:
「ＫＵＮＯＩＣＨＩ ２００９」

(Please check this page often just in case there are tweaks in the schedule - Sasuke 22 had a schedule change that included a preview 10 minutes before.. just before the actual broadcast). Also as soon as there is a change in the schedule or an actual TBS page I'll update this post as well. 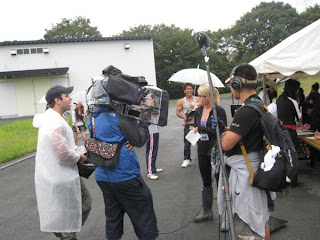 Interviews for Kunoichi 8 ©Sarah Jean Underwood
(Apparently she was the only G4 representative.. a Playboy Playmate.. Notice Makoto Nagano holding Kaiou in the background with a silly grin :)
FOR THOSE WHO WANT TO SEE THIS LIVE AS IT AIRS!!!

Please note my page on how and what programs show TBS. From personal experience watching Sportsman #1 in January and Sasuke 22 in March.. PLEASE DOWNLOAD TVANTS.. I cannot possibly stress it any stronger. MANY people used KeyHole and were horribly disappointing when the picture was completely non viewable when under load of a lot of users. We expect a LOT more people watching again. KeyHole will definitely either crash or go about 2 frames per .. hour.. if lucky when several thousand people visit the server at once. The last time under heavy load many were able to watch uninterrupted through TVAnts. It does run 1 minute behind KeyHole but the picture is a but more stable. You will most likely get a couple buffer problems (server side) but it continues right where it left off. Best yet, during the Sasuke 22 showing it did not crash even once AND you can record it through VLC. If another solution presents itself in the next month I will update this page accordingly.

Thanks to the super sleuths at Sasuke Maniac Forums:
"The live feed of TBS is on TVants. However, it is mislabeled as "Japan>NTV" (edit.. as the date gets closer I will change which feed it is. It seems to change almost daily!)

Please note that this connotates LIVE Streaming.. You must wake up at that time to see it if you plan on watching it live. TBS DOES NOT REPEAT BROADCASTS. Sorry for being so blunt but for the past year and a half I've been blogging about Sasuke this is the first question I get as when someone refused to head any warning. It will not repeat (this is not G4) so if you miss it you have to be lucky to find a way to get a copy at another time. I cannot stress it enough.. if you want to watch it live you have to get up and watch it live - it will not repeat at another time. We are lucky to be able to watch a foreign show live as it airs in another country. Please don't complain at the time you have to wake up to watch it.
Posted by Arsenette at 2:32 AM

mmm live broadcasts...yeah! Sasuke 23 and then Kunoichi 8...i'll kick asses for weeks LOL I'm sooo lucky, mid-september and october are always so friggin bad for me, I needed something to cheer me up =)

About Nagano holding Kaiou: it looks so strange...maybe because he's holding that little creature and showing his muscles at the same time =S

It's just funny how men hold babies sometimes :) Should be a fun broadcast to see even if some entrants irk me already :P I just keep thinking "this is not Sasuke.. this is not Sasuke".. because the whole weepy helpless chick thing is high on the meter in this tourney.. then again.. I was never "girly" :p