There will be a Sasuke Trials

Okie dokie! As you remember I've been keeping up with the Trials situation in Japan. It's wonderful to see them a lot more active blogging and showing what they have been going through in their journey to get to Sasuke 23. I've continued my fascination with Sasuke Trials ever since we had a lot of fun watching the show when Sasuke Maniac showed it starting from July, 2008-September, 2008. Now with that show gone it seems they have been putting the Sasuke Trials for 22 in the Navi show that precedes the actual full broadcast of the tournament. I expect the same for Sasuke 23. 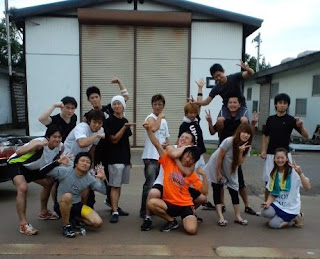 Sasuke Training Camp, August, 2009 ©森渉 Mori Wataru
This year the process was different - most likely because of the busy taping schedule with Kunoichi 8, Sasuke 23 and Sasuke 23 Trials all within 2 weeks of each other. We finally got confirmation from various sources where Sasuke Trials will be Sunday, September 6th. With the USA trials over (August 29-September 2, 2009) the final piece should be in place. I have a long list of people I'm cheering for!! UNCLI of course (though we know Yuuji Urushihara 漆原裕治 (#3 Cliffer) is already on the Sasuke 23 roster) - cheering for the other 4 - Tsuyoshi Matsuda (#1 Cliffer), Ryo Matachi 又地諒 (#2 Cliffer), Keita Tomino 富野恵太 (#4 Cliffer) (he's the guy who pwns Sasuke Park on a regular basis) and Keitaro Yamamoto (dude with the glasses) (#5 Cliffer). Will this be the year of "Moody" Makoto Yahagi? Will the previous winners like Tomohiro Kawaguchi 川口朋広 and Hiroki Nomura? Plus how about the others I've blogged about? Yuuhei Sayama 佐山侑平, 森渉 Mori Wataru, 嵐田良一 Arashida Yoshikazu, 加藤僚馬 Ryoma Katou, Hiroshi Kobayashi, Kanou Takaaki 加納隆明 and newcomer Shinya Iwasaki 岩崎 真也. Does Hitoshi Kanno 菅野仁志 even have to GO to this??
Posted by Arsenette at 6:37 AM

No matter how it turns out, I'll be sad because I want ALL of them on the show. Moody and Tomino are sentimental favorites because they try so hard and never made it. Ryo and Kawaguchi are so talented, they deserve the big stage. And Koji Hashimoto is so cute.

My favourite is Tomino Keita. I want him in Sasuke, simply.

I'm cheering too!! The more I watched them trying for years to get on the show the more I keep cheering for them. I really really hope they get back there again this time!!