Sasuke 23 is right around the corner! It's just over TWO WEEKS AWAY! Just like last year.. I've been chanting this song LOL. Looks like there will be a bunch of us in the Sasuke Maniac forums waking up at early morning (6:00 AM Eastern time) on Sunday, September 27th to watch Sasuke 23 air live (****please see the post I created for viewing options****).

I mentioned this before - Sasuke Navi (for Sasuke Navi 21 and for Sasuke Navi 22) is a great show! It's a 1 hour preview of the upcoming tournament. For this year I expect to see Sasuke Trials Fall 2009, Makoto Nagano baby birth announcement and even possible ANW Trials. The show will air BEFORE SASUKE and the SAME DAY. Please note.. they do a LOT of commercials for Sasuke and have been known to show a little bit of spoilers. So please bare this in mind when deciding to watch Sasuke Navi.

(2 PM Japan Standard Time) (Sunday afternoon)
(1 AM Eastern Time) (Sunday morning)
(10 PM Pacific Time) (Saturday evening)
Again just like last year Lost in Ube (his Sasuke 23 list is here) and I will be scouring the Internet to find what we can. With Sasuke Maniac off the air.. we have to rely on blogs, websites, etc. to find out our information! As of today we have a few people already confirmed and/or rumored to be coming, PLEASE NOTE: These names, even the confirmed one, can change due to unforeseeable circumstances - so the list is created as a guideline using past information and what has been posted in blogs in Japan. It is for fans wanting to know who might be participating. 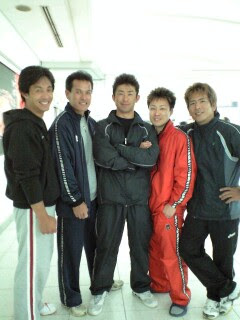 POSSIBLE but not confirmed - Expected/Regulars/Rumored
Muscle Musical (each year they have a long list of competitors from this Monster 9 created show). It is unknown how many of these will show up since some of the regulars are still in Muscle Musical Las Vegas.

Not Returning/Improbable Returns
"Sasuke Emotions" - ©Arsenette
Posted by Arsenette at 7:23 AM

I can't wait! Since it's airing on a Sunday, I might actually get to watch it. I'd have to get up at 5:00 AM (eek!) but I think it would be worth it. It would end around 8:55 AM my time, and we usually leave for church at 8:45, so I may miss the last 10 minutes. I can see that on your blog, though. I really hope all 6 All-Stars compete, and that they all clear the first stage. That's only happened twice, in the 11th and 12th tournaments. And I'd REALLY like to see Yamada and Yamamoto go all the way. Ganbatte kudasai!

I'm being hopeful for Bunpei to come this time. So far I'm hoping the Akiyama rumor is true :)

Yes! Definitely worth it. Hope everyone keeps up on the viewing options. I heard you guys in Webjam had an awful time with KeyHole. I'm hoping you all get to enjoy the broadcast in a better connected program. So far TVAnts is doing great and I'm hearing rumors of LiveStation though I think people had a rude awakening when it stopped airing TBS early in the day.. I'd still do my best to get TVAnts up and working.

Hopefully with the amount of commercials they put in the later half of the broadcast you can get to change clothes and get ready before leaving for church! Glad at least you can see it!

Guess the qualifiers have been put on gag order... so sad that more of them don't get to go on.

LOL You guys are fast :D

Yes.. after I started reading about the failed runs from Sasuke Trials from various blogs I was getting depressed :( I hope M9 asks those who did well in Muscle Park events like Kawaguchi and Matachi to go anyway if they didn't get passed trials.

I sure as heck Kanno didn't have to qualify.. that .. would be retarded..

And yes.. wtf G4.. they have to be idiot to expect people not to know who's going to Sasuke 23 from ANW after the TBS broadcast.. good.. lord.. So yes.. the G4 Broadcast is December.. that's 3 months from now..

December?! G4 stinks! And you know they'll cut a lot of the good "behind-the-scenes" stuff. Stupid G4! At least this time I'll get to see the original Japanese version. It'll give me a chance to practice my limited Japanese. Yeah, I should get to see most of it. Since I keep my laptop in my room, I can do most of my getting ready while watching the show. I can take my laptop into the dining room while I have breakfast. I'm really looking forward to this!

That's cool you will get to see it. Mental note.. They have something called Sasuke Navi. That's the 1 hour preview where they do a bunch of interviews and whatnot with whoever is going to appear in the show. Personally I like it just as much as the actual competition since you usually see where they live and stuff. This is tentatively scheduled the same day. 2 pm their time so that's like midnight for you.. I'll post it when I get the TBS confirmation on that. So far I'm hearing 2 different times though Sato's page has 2 pm their time. Let's see if it's official soon.

ghaaargh I'm starting to shake when I read "Sasuke 23".
I want Kazuhiko and Bunpei to come...seriously...
I'm really lucky for once. Living in Italy, I'll only have to be ready for 11 am. I'll go to church in the evening.
*shakes shakes shakes shakes-until she remembers of her injured foot-ouch!*

I'll see Sasuke Navi on your blog. I need to download a program to watch TBS on. Which one is best, how do I download it, and what is VLC?

VLC is another program like Window Media Player (though for me I like it better since it does a lot more formats that Windows sometimes doesn't like and it also gives you the ability to record).

The program most of us will be using is called TV Ants. I did a whole blog on it. Search for the "how to watch Japanese TV" on the right hand side of the blog. For any trouble shooting you might want to sign in on the Sasuke Maniacs forums. They are wizzes with that.. I'm lucky I got it to work the first time! LOL

Oh hey Artemis I didn't see you sneak in there :) LOL I'm adding to the post and people keep commenting tehhehehehehe

Added a pic that has Akiyama in it AND I read in the TBS site that he is confirmed.

Not a word about Bunpei though.. that's.. depressing :(

LOL and you lucky for being in Italy!

I have Windows Media Player on my laptop. Will it work for watching TVAnts, or do I need VLC, specifically?

TVAnts has to be installed on your computer. You can watch it directly from there without ever using VLC. If you wanted to record it.. that's where VLC comes into play.

The simplest way to explain the process is that TVAnts is the carrier of the signal and VLC piggybacks off the signal allowing you to record it.. but TVAnts has to play it first. Outside of that is out of the rhelm of my computer knowledge.. LOL I know juuuuuuust enough to get in trouble:)

If you are just watching though and don't plan to record (trust me there will be people recording if you want a copy later) just stick to getting TVAnts up and running. I do encourage you to check the boards though. They are a heck of a lot smarter than I am when it comes to this stuff and it will always have the latest information as to any new programs that might work better.

Torisawa is not a comedian by the way..he's just a dude who crushes fruit.

LOL that's his only claim to fame? ROFL.. okay changing it :)

BTW-- this is a long time coming, but I started a facebook group for Sasuke, and the majority of the information and pictures are stolen from your blog (with links to it, of course).

If that's not ok, let me know and I'll take everything down.

LOL not at all :) Happy more people get to see the show because of it :) Appreciate the link backs :) Which one is your page? I don't have facebook but would be cool to see it if it's public.

It's a small group but more people have been finding it everyday. Here is the page: http://www.facebook.com/groups.php?ref=sb#/group.php?gid=9857044225

Sasuke has a crapload of Russian fans!

Correction: Maybe Slavic would be a better term than Russian (my knowledge of europe is pretty limited).

O.. M.. G.. I LOVE The captions on the pictures.. ahahhahahahahahhahahahah That's hysterical! Thanks for sharing :)

I just joined the Sasuke fansite on Facebook. I love the pictures! There are two I'm wondering about; the one of Nagano on the motorbike and the one of Shingo on the exercise equipment. I haven't seen either of those before. Where'd they come from? And when was the one of Nagano taken?

TigerOfHaughton-- Pretty much all the pictures you see on the facebook page have been pilfered from this blog, so perhaps Arsenette can answer you better than I can :)

Those 2 pictures didn't come from me :D I know where the Younger Nagano picture came from though. I "think" he was like 18 there. Not sure of the Shingo one. Most likely both came from Webjam or before that since both pictures were before my time :D

Thanks. That's cool. In that pic Nagano was the same age I am now.

Just wondering if it was OK to try and predict how many would pass each stage or if I should keep that to myself so as not to jinx them...

Too bad about Bunpei (seemingly) not being in. He'd tear through the course, I'd think.

It's always fun trying to predict results.. (though I have a bad habit of jinxing people). Feel free to sign up to the Sasuke Maniac Forums. They have a bunch of polls and prediction threads :D

Wow-- then I have no idea where those pictures came from LOL. I'll have to ask our other admin...