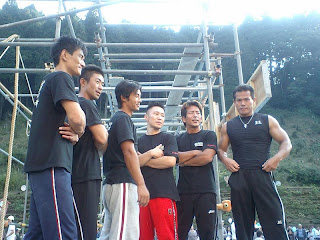 A rare sight.. All 6 All-Stars in one place at one time
「関口宏の東京フレンドパークII」の打ち切りに続き、１９９７年にスタートしたスポーツエンターテインメントの特別番組「ＳＡＳＵＫＥ」も今年３月をもって終了する。

Article from InfoSeek Woman (楽天 Woman)
Thanks to Andy in Taiwan for finding an article that was quite the buzz in Japan today. When I went to research it .. there was a LOT of chatter in every forum imaginable as to the validity of the article.. specifically the source. We do know that one of the shows mentioned in the article IS CONFIRMED to be canceled. That's Tokyo Friend Park. But at this moment outside of this article there is no other confirmation as to whether the line that says "Sasuke will end in March" is actually true. So for now there will be a question mark but not unsurprising. We've been anticipating the death of Sasuke in Japan for a while now. As I get more information I'll post it.

Edit: Lost in Ube posted an article on this as well with more insight.
Edit: Since the article was posted (and subsequently reprinted more than a couple dozen times..) the article has been proven to be 95% verifiable. At this point the only thing we can't verify is the part about Sasuke. Everything else has been verified by TBS in either other printed articles or even on the TBS website itself. It seems the information leaked about Sasuke was done on purpose. I am of the distinct belief it was done on purpose to gauge the level of interest in Sasuke so that they can make a final determination on the show. M9 and TBS' silence only helps solidify my belief in that. Especially since they took the time to verify all the other parts of the article.

Edit: 2/15/11 - I didn't get a confirmation from TBS or M9 but I did hear from Takasui. Nagano was asked today about the rumor and he thinks it's just that right now. He has not been notified about the end of Sasuke. Right now 27 is not scheduled but the rumors persisting about Sasuke ending seem to be just that.. Rumors. That's good news :D Nagano would be the first person told if it was done and he hasn't been told jack about it. I feel much better this morning :D
Posted by Arsenette at 4:19 AM

But if it ends in March (if the speculations are true), that means we're getting one more?

Ube touched on that on his blog. That's up in the air right now. I'm hearing yes and he's not sure since he's hearing "retrospect" episode..

If it's true then a retrospect really won't be enough for a lot of people... not to mention I really need to see Bunpei's face one more time before everything ends :(

Oh, crud! I was afraid of this. It isn't actually confirmed that Sasuke is ending, though, right? I mean, it probably is, but that isn't confirmed. I REALLY hope that the person who wrote this article is wrong, but if Sasuke is going to end, I hope that we get one more tournament, and that all 6 of the All-Stars compete, and that it's a great tournament for all of them. Ganbatte kudasai, All-Stars!

No more Shingo?? No more All Stars??

*cries a river and dies*

Sasuke was my escape from reality, I guess I am stuck with Twilight, Harry Potter and Roswell now..

Thanks guys for being patient on the comment moderation. I'm asleep during the day these days so I missed it until now.

Agreed Rufus.. I am hoping the rumor of a final show is real. I'd watch a retrospect obviously but I want a new show.. dammit..

Yeah the news so far is definite ending but a question as to the content of the final show. From everything I'm hearing it's definitely march.. just not sure what will be in that show. Oh and DEFINITELY I'd love a show with all 6 on there.

A bit of conspiracy speculation so please take it with a grain of salt, but I wonder if they plan on canceling it because they know an American is close to achieving total victory. I mean, with 4 of the 6 contestants making it to round 3 in the last tournament there is some pretty good potential that an American Total Victory is imminent.

Its probably very very untrue, but something to think about.

All of my training has gone to waste. All TBS has to do is just advertise Sasuke a little more. Sure Sasuke 26 wasn't all that great but they can't just give up.....I walk away frustrated now.

On the Ninja Warrior facebook, they themselves said this "TBS has confirmed that they have not canceled Sasuke and have not yet scheduled the next event."

Yep I'm aware what the NW intern who updates the FB said about the article written in Japan.

Half understood your statement.. but the article is not rubbish. Since it's been posted 95% of the article was verified to be accurate. The only thing missing is the verification of Sasuke ending in March by TBS or M9. Everything is else is correct so it's hardly rubbish.

I posted a article on my blog http://suppaiwainryu.blogspot.com/2011/02/sasuke-tomarimasu.html.

Apparently unbelievable and incredible in japaniese are the same word

I study Japanese. What it says is 'Sore wa shinji rarenai desu' which is ' That is believe not is". I know that to most people this makes no scene what so ever. In Japanese paragraphs are often backward and jumbled up compared to English. The way for English speaker to read this is 'That is not believable'. If you need to know an anything else check my blog. http://suppaiwainryu.blogspot.com/

Ah cool thanks :) Yeah when I read stuff on Google I have to take it with a grain of salt simply because word structure and sentence structure is so different than American sentence and word structure. Of course making any computer translation ridiculously difficult to believe in full form. Usually I try to get a real person to translate words and sentences. So thanks for that one!

I'm still holding out hope. I think it will continue at least through 27.

I really hope so. And I really hope it continues past 28, because I want another shot at it (hoping for ANW3 too).

Does the news of Nagano

Arsenette thank you for the update on things in japan you posted on g4 this will help put many worried peoples mind slightly more at ease. Thinking of all in japan

You're welcome :) The earthquake/tsunami was devastating to monitor and I figured that many would be trying to figure out that the guys we have come to adore from this show were actually okay. I spent most of the day trying to figure that out. As you can imagine information is difficult to come by but many of the competitors have been kind to update pages and whatnot with a good idea as to what's going on. As I find out more I'll update a post but until I get direct information from one of the All-Stars I'll keep it tied to this post atm.

Thank you very much.
Mia

american ninja warrior tryouts are being held in may this year, how can they have this event if the winners participation in sasuke isnt guaranteed?

Maybe because when this article was written in Japan it was written 3 months before the announcement saying so? Besides.. even now it's not guaranteed since the Japanese have not been notified as such. For ANW2 G4 was told it was going to be in September when everyone else was told it wasn't guaranteed.. then out of nowhere it was held a month and a half later when they found time for it. Even so on top of that.. this doesn't negate what the article said.. this could be the last Sasuke.