The return of Sasuke in Taiwan and Sasuke related news

©Gold Sun TV
Today was filled with mixed news. First of the great news that Sasuke will return to Taiwan.. for now they are going to show Sasuke 25. For those who remember when I wrote about the Death of Sasuke in Taiwan (back in September) it seems that some compromise was achieved between the current Sasuke affiliate in Taiwan (Gold Sun) and TBS who owns the broadcast rights in Japan for the main show. Who knows.. maybe TBS dropped the exorbitant price for Sasuke 25. It's clear from the lack of Sasuke 22+ broadcasters that the latter (and albeit longer) broadcasts of Sasuke are a LOT pricier to obtain. Many broadcasters around the world refuse to buy the new Sasuke broadcasts. One could argue the price includes 1 more NW episode while others can complain about the G4 heavy centric broadcasts that 21+ broadcasts of NW are filled with. For now it seems Gold Sun has decided to obtain the rights to Sasuke 25. The news came from the blog of Lee En Chi リー・エンチ (thanks Arty for finding it) who has been monitoring this very closely in Taiwan as one of it's major advocates to returning Sasuke back to the clamoring fans who were denied a Trials back during the summer. No news yet on exactly WHEN it will air but it is definitely good news. Hopefully that will mean an airing for Sasuke 26 but at this moment there is zero word about that broadcast. When I find out I'll post it here.

In the meantime American Ninja Warrior 2 (ANW2) has started to air in the USA. It is now official that for the first time in the 13 year history of Sasuke will a foreign affiliate spoil the results of Sasuke 26 BEFORE the official broadcaster (TBS) in Japan. Date for Sasuke 26 results of the Americans will be December 23rd, 2010 on G4. G4 must have paid an exorbitant amount of money to get TBS to drop first air rights of Sasuke. That unfortunately is horrible news for Sasuke in Japan as a whole. Hell.. there isn't even a DATE for Sasuke 26 in Japan confirmed. TBS is too busy promoting ANW2 (which airs only in limited distribution in the USA) all over Japan Internet. If TBS spent at least "some" time promoting Sasuke 26 (which they call Sasuke 2011) I wouldn't be half as angry. I can't even start a "So Excited" thread with possible people going to Sasuke 26 simply because there has been no news for over 2 months.. They taped back in October 19th and it's been quiet ever since.. though if you want to see any of Sasuke 26 just watch G4.. they've already shown the obstacle changes for Sasuke 26.

Thank you for following. Sasuke #26 is scheduled to go on air on January 2 as one of the New Year Specials. 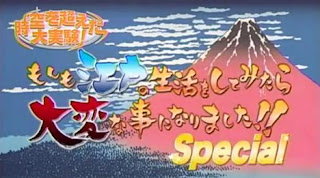 Finally in better news I'll be working on a blog about a show called 時空を超えた大実験! (Of experiments over time and space!) that I missed way back in October. If you remember from my previous blog TBS decided to preempt Supamoku episode with the Sasuke Allstars (Makoto Nagano 長野誠, Shingo Yamamoto 山本進悟, Kazuhiko Akiyama 秋山和彦 and veteran Kenji Takahashi 高橋賢次) I was waiting for.. only to find out that it DID air.. but.. with a different title, different day and different time-slot. It ended up on some show called 時空を超えた大実験! (Of experiments over time and space!) and it aired on Saturday, October, 30th during the afternoon. The premise of the show was to recreate Edo period rituals. The part that the Sasuke All-Stars were tasked with was to transport a block of ice from Mt. Fuji to Tokyo... Thanks to the wonderful community who read my blog I've obtained a copy for purposes of being blogged here. Hopefully in the next week I'll have it up for your viewing pleasure.
Posted by Arsenette at 12:32 PM

Insanely happy that Sasuke is back in Taiwan :D Also, if they lowered the price...I have a tiny hope that GXT could buy Sasuke 21 and after...
I'm frustrated as well about TBS letting G4 mess with Sasuke. It just doesn't feel right. /sigh...

Here in the UK we're stuck with the the G4 NW shows up to Sasuke 20 (so seasons 1 - 3). Thankfully, I've managed to get hold of the Japanese broadcasts (which are better IMO).

The people at TBS really seem like a bunch of clowns though, they make all these shockingly bad decisions, and then allow G4 to walk all over them because they need their money to bail them out. But, if they'd not been so stupid in the first place....

Yeah.. that's why I said Mixed news. While the production value of ANW2 as a trials show has improved I'm not happy with the implications are with the airing of the original show now. I've never been happy how G4 has handled the NW shows in general and not I'm REALLY not happy with at the current turn of events. Not only do they change the content of the show to be then sold worldwide as an American centric show.. it's now airing before the original broadcast.. /facepalm

OMG. They STILL don't have an airdate for Sasuke2011!!!!! That's ridiculous. Too weird. That G4 is airing it first? Are they only going to show the Americans or the whole thing?

As far as G4 is concerned they are showing ANW.. 100%.. meaning the selection of the 30.. then 15.. then 10 then how they did in Sasuke all in one go. They don't see the distinction between what should be in the tournament along with the other 90 and what not to. My concern was that they did this before and fans went ballistic. Not necessarily because the 10 were shown outside of context.. but that they deleted the ANW people completely from the NW23 broadcast. So far they are poised to do the same. The more recent issue was that they plan to show Sasuke 26 results not only ahead of NW26 (which we expected) but ahead of the official broadcast of the tournament in Japan. That was not expected.

I just wish I could see ANW2 here. I have DirecTV, and now that G4 is gone, I will have to look harder to find it. Also, G4 pisses me of in general anyway, and now they are going to air it ahead of TBS? Who do they think they are?