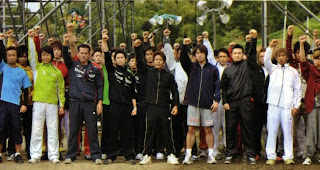 With what seems like forever. We are finally getting solid information on Sasuke 26 on TBS in Japan. It started off with TBS finally revealing the date for Sasuke 26 in Japan despite G4's airing of the Sasuke tournament well before TBS (by a week and a half) - ANW 10 finalist only btw.. the real tournament is in March, 2011 on G4) late last week. The tournament itself was recorded way back in October, 2010. Lost in Ube has been on top of everything for the past 2 months and has the updated list of confirmed competitors. He's been scouring the Internet to find what can be found. With Sasuke Maniac off the air.. we have to rely on blogs, websites like Sasuke Mania and Monster 9 and TBS page which are finally up!! 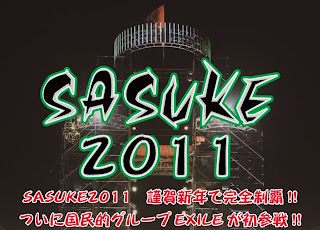 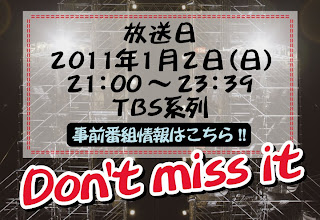 Now.. there are 2 specials have have been added as part of the lineup:

1月2日の放送に向けて、2本の事前番組が放送されます。
For the January 2 broadcast, the show will be broadcast in advance of the two.
ぜひご覧ください！ Please look! ！

EDIT: Time shared with another show.. Time for Sasuke might be shorter than normal...

EDIT: THIS is a rebroadcast of Sasuke 24

Mental warning about the Specials as well. BOTH air during the Japanese daytime.. that means that everyone in the United States sees it THE DAY BEFORE. Note the times and use the conversions as needed.

(Same information can be found on the Monster 9 website) 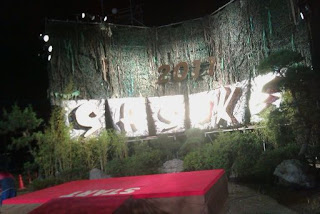 There was a bit of confusion as to exact content of the shows airing before Sasuke 26. One of the shows seems to be Navi (which is the official preview of Sasuke). The special on December 29 seems to be it simply because it's the shortest one. Usually Navi is 50 minutes long but this one is just under an hour and a half. The second one is a mystery so far. It's 3 hours long.. longer than the Sasuke 26 broadcast.. A possible explanation would have been a Sasuke 25 reair. We are still awaiting a history special that was supposed to air last year in anticipation for the Sasuke 24 broadcast that was also during New Years. That never happened and that huge poll that was supposed to generate the top moments of Sasuke as viewed by the audience was never posted. Maybe one of them will have that?
EDIT: I asked TBS this question and it seems it's all new content and no repeats of previous content! So it's basically one huge navi and a very possible history special! Hurray!

EDIT: Booooooooooo.. the first special is being shared with another show entirely and the 2nd special IS a repeat.. it's Sasuke 24 though.. so I guess they are celebrating Yuuji's win? More crying from Yamada I'm sure though.. he was the idiot who bitched about his shoes..
For the full list of confirmed competitors please go to Lost in Ube's page!
Alison from G4 showing off the Sasuke 26 course

In other news. It seems there will be NO Sportsman #1 this year :( That's very disappointing. Being new to the series I was hoping they brought it back (the WHOLE tournament). Seems not all is well in TV land in Japan. Hope it's just a hiatus and not a cancellation.
Posted by Arsenette at 4:22 PM

As the date gets closer they "should" explain on the TV guide lineup exactly what the content of those shows are. If there are others I'll add it to this page as well. I'm happy I don't have to wake up at the crack of dawn to see them!

Ooooh I've been waiting for this blog :P
Gonna have to stay up late for the first special, and wake up in the middle of the night for the second one.But considering how happily my brain switches time zones it shouldn't be a problem LOL.
I really hope we finally get to see the history special, especially if the do show the "top moments of Sasuke" clips.

Oh well. At least I'll be able to watch the main show.