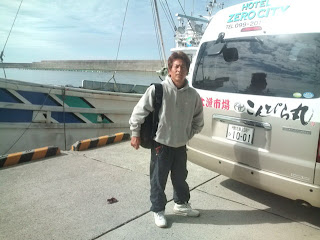 All-star - Makoto Nagano 長野誠 on his way to work ©Konpiramaru Restaurant
This month has been an exceedingly frustrating time for me. First, TBS decided to preempt Supamoku episode with the Sasuke Allstars (Makoto Nagano 長野誠, Shingo Yamamoto 山本進悟, Kazuhiko Akiyama 秋山和彦 and veteran Kenji Takahashi 高橋賢次) I was waiting for.. only to find out that it DID air.. but.. with a different title, different day and different time-slot. It ended up on some show called 時空を超えた大実験! (Of experiments over time and space!) and it aired on Saturday, October, 30th during the afternoon. Seems that they just slapped it on and expected people to find it somehow... Many people missed it, or caught the tail end of it while channel surfing. I missed it entirely and was more frustrated simply because I was AWAKE during that time and on the computer doing other things. /sigh.. Just when I think TBS is getting their act together and doing some cross promotion to promote Sasuke... here they end up doing this. So.. if by some miracle I manage to secure a copy of the show I'll blog it. But... the odds of that are so exceedingly low.. it's depressing. With Sasuke 26 STILL another 2 months away it's a pain waiting this long with nothing else to watch on television.

Also in the frustrating category is ANW2. For those going "hey.. she wasn't going to watch it anyway".. I'll explain. I posted this on the G4 forums as well to see if anyone in G4 would actually read it. I was wrong in thinking G4 learned their lesson from the war earlier this year when they aired Sasuke 23 devoid of ANW competitors and showing the ANW10 in their own show 4 months before.. They are doing it again for Sasuke 26... and what's worse.. they might show it before the TBS broadcast..

Quote: Yes, the last 2 episodes of this season of American Ninja will be the Americans running in Sasuke 26.
For those having to wait until March, 2011 to see a show they already spoiled in ANW2 3 months before.. this is ridiculous. What's worse... they might delete the ones who did pass stage 1 (if there were any) from the main broadcast again and cause even more confusion... As for what's going on with hardcore NW fans. There are a LOT that are planning to boycott the last 2 episodes of ANW2 not as a form of protest.. but as a way to continue watching the show the way they always have.. without spoilers. Why watch the tournament (NW26) 3 months later with a bunch of spoilers.. when they can watch the tournament spoiler free and enjoy their viewing of Sasuke? They are in a dilemma because they have always been faithful to NW/G4's version and waited however long it took G4 to finally edit it. (Here's the discussion in the G4 forums) As a hardcore Sasuke fan I can never understand why people would do that but that is their choice. G4 is making it difficult .. again.. to try to keep up with this tournament without their viewing pleasure disrupted simply because they lifted the American competitors from the Sasuke broadcast. There's a lot of anticipation for ANW2. Especially those who watched it from the sidelines (which btw was a good idea that G4 did allowing the audience to see the show live) they'd want to watch it with commentary and know who all of these competitors were. Not the mention the 700+ people that competed to see if they were shown on TV And of course the Sasuke fans who cheer everyone despite G4's involvement... after all the contestants should not bear the brunt of G4's poor decisions. 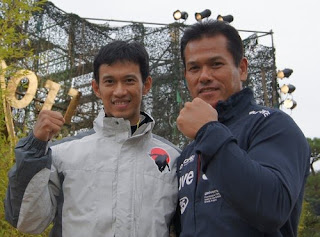 Taiwan's Lee En Chi リー・エンチ and Mr. Sasuke Katsumi Yamada 山田勝己 during Sasuke 2011 (better known as Sasuke 26) ©Lee Enchi
The other problem if they don't move the last 2 episodes of ANW2 as it is (the part where they show the ANW10 competitors running the Sasuke 26 course WITHOUT the rest of the competitors in the tournament.. just like they did with ANW1/NW23) it has a potential to actually run BEFORE the official TBS airing of January, 2011. I don't know the actual schedule but if they start on December 8th, 2010 by showing the first 4 episodes (like they did in 2009).. they can finish before Christmas.. Even if they added more than 8 episodes.. they STILL can finish well before New Year.. which is the target weekend for Sasuke 26 in Japan. How TBS is allowing this is beyond me. Maybe they don't know? So much for first air rights..
Posted by Arsenette at 11:23 PM

I fully intend on reviewing ANW 2 on my site in some form. (Haven't decided if it will be written or vlog form yet)

You can bet I'll discuss my problems with G4's choices, especially a certain decision made during the semifinals.

Oh I expect quite a bit of controversy when THAT comes out.. And we don't even know anything about the final yet..