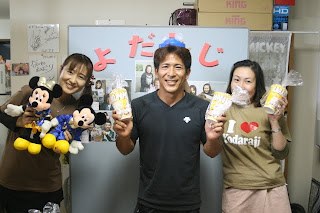 Makoto Nagano 長野誠 posing with the Yodaraji Radio hosts during his interview on November 8, 2009 ©yodaraji radio
He had fun with this picture. There is a progression of pictures where he uses the popcorn as weights :p

Note: This blog was edited on November 12 with a brief translation
As I had mentioned on a previous blog, I was told the 5th interview with Makoto Nagano 長野誠 was incoming soon on yodaraji radio - which is a radio station located in Nobeoka (which absorbed Kitaura, Nagano's hometown) on the east coast of Miyazaki Prefecture. Being of course the local celebrity of the region he's been afforded the opportunity to be on the show whenever he wants :) Well they didn't disappoint! :D The November 8, 2009 radio interview was posted! I'll be updating this blog as I get more details as to what was said. 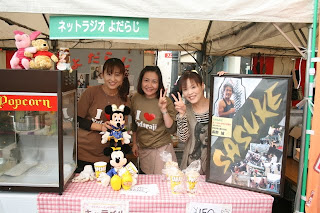 Yodaraji hosts posing from their popcorn stand ©yodaraji radio
This is Nagano’s fifth appearance on Yodaraji radio (all previous interviews are still on the website - top right of the main page). I blogged about his April, 2009 interview. From the overall general impression it seems there was a local festival called "のぼるざるフェスタTogether2009" (Festa Noboruzaru Together2009) that took place October 31/November 1 in Nobeoka City. The hosts of Yodaraji put up a popcorn stand and had a spot specifically for Nagano to sign autographs. 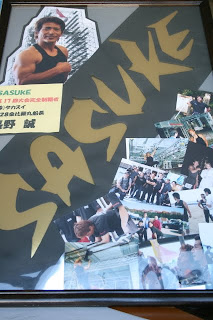 Nagano poster during the festival ©yodaraji radio
They had a great poster made for him and inserted what seems to be personal pictures he contributed (nice personal touch.. I want to see more of the pictures! .. ehem.. ). From what I can gather .. let's see.. personal picture of him posing with this fist pump in front of the Final Tower in Sasuke, the Levi Apology tour™ picture he posted on his website, a couple pics from the grand opening of the new version of Sasuke Park in Muscle Park I blogged about last year, personal pics I've never seen before of Takeda and Nagano in the MRT Beach competition this year and some odds and ends personal shots of his friends in Sasuke. 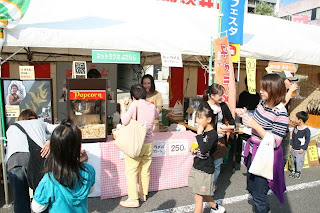 The popcorn stand/Nagano stand at the festival ©yodaraji radio
The impressions of the just under 17 minute interview he covers a range of topics. I got a brief overview of the topics discussed in the radio interview. Thank you so much!! Anyway.. the start of the broadcast they mention that Nagano and family spent the previous week helping out at the Yodaraji booth at a local fair. He signed autographs and was very gracious in promoting the radio program. So right from the get go this interview happened most likely over the weekend of the 8th (when they actually posted the interview on their blog).

They start off talking to him about the name of his son. By now we all know the name of his son - 塊王 (Kaiou) (his son's name in Hiragana かいおう) and pronounces it deliberately as to make sure they got it right. I hear a Kawaii.. so they think it's cute or at least the baby is cute. Nagano is very smitten with his baby. Most people say baby looks like Daddy, especially the skin color. (laughter all around.) "He is darker than most babies his age." (More laughter). Mystery about unusual kanji. Originally, he had wanted to use "Sea King" (海王) but after consulting a Shinto fortune teller, they were told the "lump" kanji will bring him more luck. It's actually very common for Japanese people to consult these religious folks for baby names.

That kai (蝪・ means a clump of earth. The right side 鬯シ represents the circular shape of a spirit, like ones you see represented as fireflies or glowing balls.
Then the left side 蝨・is earth/soil.
From the you get "a round clump of soil."
(Thanks @BretMayer) 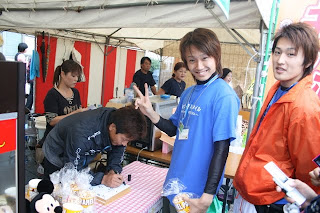 Nagano signing autographs during the festival ©yodaraji radio
Talk turns to Sasuke. Miki, one of the ladies, didn't watch the last show. In fact, she usually doesn't watch them and Nagano gives her hell (good-naturely) about it. Nagano said he was confident that if he passed that Stage One obstacle (Most likely referring to the Slider Jump), he would go all the way. He said if he had two more seconds, he would barely pass. If he had three more seconds, it would have been plenty of time.

He then talks about getting old, and how it's the lower body that gives out first. Upper body strength is easier to work on. Even he was surprised at how he needed an extra try at the Warped Wall. He obviously dislikes the veteran vs. newbies storyline. He says Sasuke is not a competition. He wants everyone to do well. He just enjoys it when people do well. He says the pressure of wearing 100 is enormous. There is pressure to carry the show when no one does well. Then when lots of people do well, there's the fear of being the only one left behind. 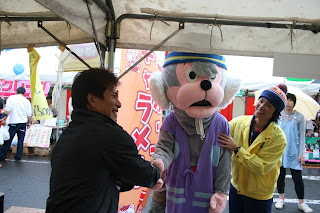 Nagano posing with a mascot ©yodaraji radio
He talks about the Nobeoka kid who cleared the first stage. (winner of the MRT Competition 18 year old Yoshiki Itou 伊藤圭槻) They trained together a bit. Nagano thought during the training that the kid has the speed to clear the first stage, but lacks the strength to do well on the second and third stage. He has to build up strength. "It's not about passing the first stage. It's not even about getting to the third stage regularly. If you do Sasuke, you have to prepare for clearing the Final Stage." He then says, "I'm not going to mention anyone's name ... like Takedacchi..." (Ha. Ha. Ha.) (It's common and affectionate to call someone ....-chi. As an example - do you remember the toy Tamagotchi?) {LOL I can't believe he took a dig at Takeda.. ROFL!!!!} 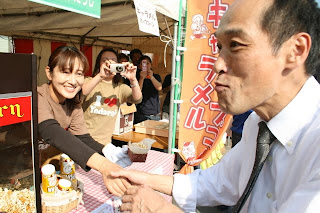 They talk about the next Sasuke which will be taped in December... a possible air date is January 1... but Nagano says the date is not set yet. January 1 is a very prestigious time slot in Japan. Then he talks about the popularity of Sasuke worldwide. Ta-chan mentions that she gets regular e-mails from abroad. Nagano says he gets regular e-mails through his webpage. "In fact, all the contacts I've had lately are from abroad." She asks whether they are all declarations of love and he says no. "Most people just wish me luck. Some tell me how I have inspired them to health or to try things. It's nice and really makes me happy to hear things like that."
Posted by Arsenette at 5:53 AM

I laughed out loud when KENNY BLANKENSHIP in real life showed up. He's a governor now huh? Well just look at the pictures everyone took while he was around.

Yeah that was funny :) He's been featured as well back in Sasuke 21 (I think.. no wait.. I think it was 20.. yeah it was when Nagano got out of the hospital) where he went to the Governor's office to get a pep talk. There he was talking about whether or not the mud pits were as gross as they were in the past (since Takeshi's castle was filmed on the exact same lot!). I found that funny.

Sounds like he had fun. Can't wait for the translation.

Oh, I thought you might like to see this. Newest post on my blog. It's about the martial arts tournament I competed in on Saturday. I borrowed one of your pictures for part of it.
http://tigersplace-tigerofhaughton.blogspot.com/2009/11/deep-south-martial-arts-championship.html

Oh cool thanks for the link :) No problems on the picture :) Appreciate the link to where you got it from.

Cool. Thanks for doing this. And thanks, Chaki, for the translation. Nagano teasing Takeda, funny.

Takedacchi...LOL
I bet we'll see some jokes the next time Nagano and Takeda meet =P
Thanks Elsie and thanks Chaki!

I like that nickname too :) tehehehhehe though you are right. I'm sure there will be payback for that at some point. Seems they take turns ribbing each other.. though in all actuality.. Takeda gets in WAY more digs in public than Nagano. Seems Nagano has been in a good mood (and confident) to make fun of him :p I'm sure the "I've been in more stage 3's than you has come up.. while Nagano can say he's been to the final 5 times :p Oh to be a fly on the wall for that convo!

Oh and as for nicknames.. they have a few for each actually (which I understand is quite common depending on how close they are to each other).

Nagano and Takeda are like a couple of little boys when they get together. Remember the vids of when they were at Muscle Park last year? I don't have to understand the language to know that they were picking on each other all day. They seem to enjoy it, though. And they're just teasing, they aren't being mean to each other. I think Nagano added on the -chi so that the ladies (and Takeda if he heard the interview) would know that he wasn't being mean. He was teasing Takeda, but he was doing it affectionately.

Oh I remember those videos :) I posted them! :D

And I agree that they were not being mean at all. It's like the old addage that you aren't family if you can't tease one another mercilessly! I remember from the last video of that series I put up.. where the kid's father asked about whether or not they ate peppers because his son didn't like peppers.. and Takeda basically threw Nagano under the bus for the sake of the little boy. You can't do that with people you are not close with. Having fun with your friends. That's something I really like about the relationship they have with each other.

Yeah, I remember the part with the green peppers. I think that was revenge for what Nagano did a couple of minutes earlier. They were talking about training and Takeda said that work is the most important thing. I think he simply meant that work comes before training, but Nagano took it out of context (deliberately, I suspect) and told him that family is supposed to be most important to him. Takeda tried to talk his way out of that and then looked at Nagano like "Thanks a lot. Look what you've gotten me into." At least that's what it looked like to me.

Yeah it looked like that to me too :D