Edited: November 27, 2009 - Added Monster 9 page information with date and time.
Edited: December 12, 2009 - Added information found by Ube
Edited: December 24, 2009 - Added information found by Ube in regards to a list of competitors.
Edited: January 2, 2009 - Added information on Navi and added a commercial on YouTube
For all of you who stayed up to watch Sportsman # last year (sorry.. I was too burned out to blog about it) and read about it on Ube's blog (he has several posts on it including pictures from the 2009 Sportsman #1) there is great news!! For those who have no idea what this is.. Sportsman is a TV game show on TBS (Japan) that is also produced by Monster 9 (creators of one of my favorite shows - Sasuke) and shown sometime on or around New Year's Day. With the announcement that Sasuke 24 is airing for over 6 hours on New Year's Day and the fact that Celebrity Sportsman has been canceled for 2 years in a row... (The last champion was Wakky ワッキー) we all feared that this was the end of Sportsman #1. Previous winners include 池谷直樹 Naoki Iketani, Paul ANTHONY Terek, ケイン・コスギ Kane Kosugi and current defending (and 3 time) champion 宮﨑大輔 Daisuke Miyazaki. 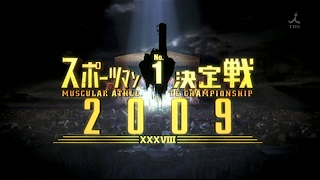 Title for the 2009 Sportsman #1 Competition that aired on January 3, 2009
I sent a few emails to M9 recently about fans thinking the show was canceled. In the past I'd get an email back but recently they immediately post something on their website to confirm or deny something. It happened again. I checked the Sasuke Mania website and lo and behold it was there!

This page will update with new information as it becomes available!

Similar to what happened with Sasuke 24's broadcast announcement.. they are going to do a special as well showing favorite moments from Sportsman #1 history. Here is the translation of the pop up menu you get. (this time.. I didn't rely on bablefish disaster.. because the stupid thing said MAY for a broadcast date when that was incorrect! Lord knows the screw up with the original Sasuke 24 bablefish disaster was embarrassingly enough :)

『もう一度見たいスポーツマン№1決定戦名場面』大募集！
2010年1月に放送が決定した、スポーツマン№1決定戦。
巨大跳び箱「モンスターボックス」を生んだこの番組には、数多くのドラマが存在します。
そこで、あなたが『もう一度見たいスポーツマン№1決定戦 名場面』を大募集します。
集まったリクエストは、番組に反映したいと考えています。
リクエストの詳しい理由も書き添えていただけると幸いです。
The decision has been made to broadcast Sportsman#1 in January of 2010.
There is a great deal of drama in the show that gave birth to the gigantic vaulting horse "monster box".
In regards to that, we will do a big collection of things you want to see one more time from Sportsman#1.
We'd like to show all of your requests that we collect on the show.
We'd be very happy if you were to write a detailed message concerning the reason why you want to see this specific part again.
EDIT!: Okay! So to recap! They are showing Sportsman #1 2010 edition! January 7, 2010. Similar to the Sasuke 24 announcement, they give a form for you to fill out and then it just gives examples of requests and asks for your reason and email address. I'm not sure when they will show this particular recap show but they are doing 2 this year. Sasuke and Sportsman. In the meantime I'm excited!

P.S. I'm sure some mention will be done in memory of a competitor that competed in the last Sportsman #1. 三沢光晴 Mitsuharu Misawa, NOAH Pro Wrestling Legend died June 13, 2009 after suffering a heart attack during a wrestling match.

Good! I haven't ever had the possibility to watch Sportsman no.1 yet, so I'll watch it for sure. I heard (well,read) a lot of people talking about it so I'm very curious.
And looking forward to see some Sasuke competitors too :D

Just added the date. It's going to be on a Thursday.. afternoon for you..