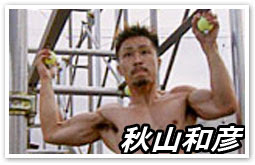 Last year we found out about cool events that the All-Stars get invited. One of them was in July in Miyazaki City in the south Island of the main Japan Island Chain. Same prefecture that Makoto Nagano was born. Both Toshihiro Takeda and Makoto Nagano were there as guests while they watched and even participated in beach sports. In the end they ran a Sasuke mock course for fun and got burnt in the process because of the hot sun along the beach. We finally saw blog pictures of it and I was scared we wouldn't see it at all. MRT was the host and they had 5 hours of live coverage of the event through their TBS affiliate only showing in that area. So for us streaming from Tokyo.. we couldn't see the event. They finally did show clips in the Sasuke 21 Sasuke Navi show. 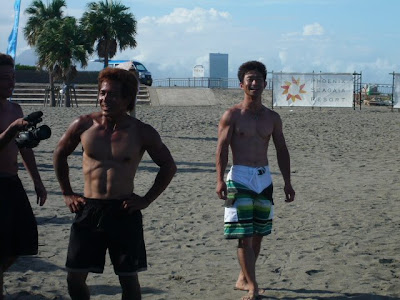 Takeda and Nagano talking to the press.. My GOD.. Nagano is BURNED.. look at the shoulders! ©Mu-YUKIMI's blog

Thanks to adorable Ube - he found some information and posted it on one of the postboards I go to - Sasuke Maniacs. He found an article stating the show's intent of not only coming back again for this year, but of actually qualifying the top spot to be an automatic bid to Sasuke 23 (which was just announced btw). So I went back to my old blogs and check the links and found that MRT already has a page for the event ready.. and to my surprise.. KAZUHIKO AKIYAMA is invited!! I'm sooooooo excited! Now.. I really want to go.. /cries.. He NEVER gets invited to these things.. okay okay.. he does for Maguro Festival but that's because Nagano is in charge there.. and I'm sure he's invited again because it's a Nagano local event. I don't care.. I'm so happy he's going! Granted.. he's going to spontaneously combust in the sun.. he needs to pack some serious sunscreen.. he's going to be toasty..

Okay going to start with the article first and dissect what is in there:
Copyright 2009 THE MAINICHI NEWSPAPERS. All rights reserved

This time he's been bought for the event.

We should, I think young people should try it.

MRT "Miyazaki Beach Sports Championship No 1." I think I may SASUKE Miyazaki version. Moreover, it is. 2 is the second year of a special project. MRT to explain the growth of the branch's Takuya Management Division.

"The winner of the men of the TBS television show, you can play SASUKE"

"SASUKE and Makoto Nagano was born in Nobeoka, guests were greeted by Mr. SASUKE Takeda Toshihiro ORUSUTAZU of some exemplary performance."

July 25 event, a leafy tree SANBICHI Miyazaki. Eligibility is more than a high school student living in the prefecture. 200 men, 50 women have been seeking. Textures of the tournament, on August 8 will broadcast from 2 pm (a time frame).

Tell a little beach of the jungle gym. The length is about 35 meters. And low clouds, pipe slider, and the rope, while a small set, and intellectual powers that require physical strength.

Applicants must mail or fax. (I cut out the rest)

Okay! First thing is first.. If ya'll want to run over and try this event.. er.. don't bother - it's for people who live in the Miyazaki Prefecture only. Which is nice. It's a local event (in Miyazaki City) that did well last year and Monster 9 is going to give them one spot for Sasuke 23. I find it funny that since Nagano is the local guy HE is considered Mr. Sasuke :p Thought you might find that of interest. Same as last year they are taking 250 people (first come first serve). 200 Men and 50 women to take on the 5 part course. In the end the top 10 men and top 4 women who survive will take on the Sasuke course they have. They also beefed it up from last year it seems. 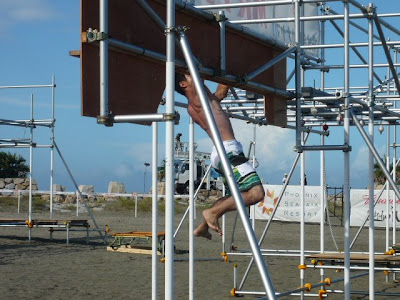 So here are the events for this year again. They look almost identical to last year's event.

5勝CHI抜KE a gateway, a number of beach sports win the crown of somebody!

We look forward to playing with confidence in your strength.
Special Guests

Now in closing . This event was off a pier off some place called Sunbeach. Ube was so kind as to find links and locations and stuff like that. The event was a part of Phoenix Seagaia Resort (gorgeous looking resort btw.. nice website) presents "Pirates' Adventure Beach". Nagano did Viking.. with the norse gods.. why not go after the Pirates? AAAAAAAAARGH.. Okay.. another link to this Pirate's Adventure Beach page... wtf is up with the technicolor burgers??

Anyway if I get additional information.. yeah yeah.. you know by now :) I'll do my best to post it.

Note that the air date for this event is actually on August 8th. Still unsure if it's going to be MRT only? or part of Sasuke Navi in TBS.. Still time for that though.

That first pic of Akiyama is hawt!! Well, all except for the meowing sounds coming from his armpits (thanks, Nutz)

Ah well, Akiyama's pics are always wonderful!
But, damn, sometimes they make me feel sad because I think of what he did with all his problems and what he could do if he wasn't so unlucky...

Hey, you busy little bee you. Lots of new and exciting news and updates!! Miyazaki sounds like a blast for the local crowd. Awesome 23 about the confirmation, especially for UNCLI and the trial qualifers!!

I don't think they are from Miyazaki so they are kinda stuck this year by going through this avenue. Personally I would totally go for this event.. I mean.. it's the friggin' beach.. palm trees.. Sasuke.. I mean dang.. LOL

Oh I would add...
"friggin beach...palm trees...Sasuke...""Akiyama and Nagano without t-shirts..." xD
just joking, obviously =) but it really would be great to go!
aaah let's keep dreaming ( I have the feeling that I already said this =S)