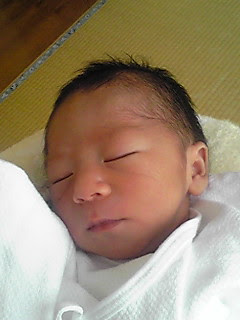 I got a private message in a postboard last week apparently but since I don't get email notifications from most boards and have been taking a break from postboards lately giving myself a break from overdosing on all things Sasuke :D I totally missed this entirely! Thanks to the person who sent me this link! I feel bad because I really wanted that person to get credit for finding the link for me to share! You know who you are and I thank you! 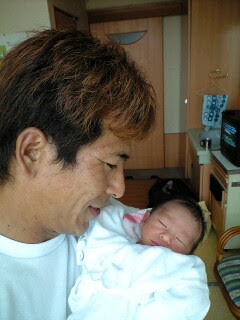 Apparently the blog is a friend of Nagano's (based on other posts in the past.) This person who posted the pictures he got from Nagano himself is from Nobeoka which just happens to be Nagano's hometown. Seems the baby was born and from all accounts (seems like they are hospital pictures) Makoto was present for the birth! Which (poor Asami) was a cesarean birth. 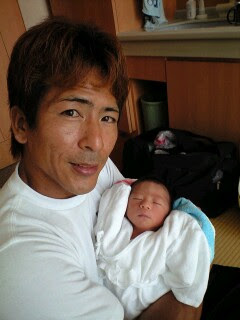 Father and Son look great!
The date of the post was June 6th (which was a Saturday) . From other emails I got when I first posted this blog entry, the baby was born on Wednesday, June 3rd. So these pictures shows him about 2 days old..

Hopefully his main page will update with the kanji and another family photo :) If I find more information I'll post it! Until then.. CONGRATULATIONS NAGANO FAMILY!! (Makoto and Asami)

Update: We all know that Daddy's name is Makoto Nagano 長野誠 (Everyone's favorite Fishing Captain Bada$ of the Millenium) Apparently the meaning of baby Kaiou's name is really cool! Thanks to my friend @BretMayer I found out some really neat things about the new baby's name! I see on the blog post the name was written in hiragana but not kanji. This is what Bret wrote me:

He says his name is かいおう (Kaiou) , and that it makes him sound like a man of the high seas. So perhaps the kanji is 海王.. 海(ocean) 王(king)

(I then told him that his daddy was a professional fisherman)

definitely 海王 and 海皇 are the top two possibilities. However, かいおう he wrote himself in the blog
(I told him he wasn't the originator of the blog.. it was a family friend)
Possible he didn't know yet, or he just wanted to use hiragana so people wouldn't have to guess the pronunciation
Thanks again @BretMayer for much help! Both kanji names sound totally cool! Now to figure out which one of the kanji he chose :D (P.S. I'm elated he's not named Sasuke...)
Posted by Arsenette at 3:50 PM

Woohoo! What a cutie. And I don't even like babies! :)

Eeeee woogum woogum woo! He's so darn cute! C-section would explain why he has a pretty face (Char was a c-section); they don't get all smushed up and squeezed. Birth is hard on babies.

OMG I have to send a congratulatory card, even if it makes no sense. :-)

LOL woogum :) I totally love the ninja peanut comment! I'm so using that!

Woogie-coo! Can't wait to see him in a little black tank top and little black pants at the next Sasuke. He ought to be good and cute by then (newborns look like little aliens to me--can't help it)

LMFAO Snowy.. Alien? Well.. then.. Meri wants to eat the little peanut so I guess alien is not that far off LOL

Oh man Sasuke 23 is going to be crazy with the baby in a black tank top.. poor kid.. LOL

Just can't help but smile at a newborn pix! Sigh. He's so peaceful looking when asleep... then they burst into a cry with all their might when hungry.
Anyone checked her maternity suite? Oh, nice private room.

Thanks for adding the information about the baby's name. Interesting stuff. Cutey, that maternity room looks is a far cry from Nagano's hospital room. Good eye!

What an adorable baby. Love the pics.

Hey chaki :D Definitely Chaki - that's one awesome maternity suite! You know me I was staring at the background going "hmm where is this..".. LOL Which is why I said hospital pics. I wonder how long you stay in hospitals in Japan? I know in the US they kick you out when you wake up (at least it seems that way)..

Hey Anna and Pitts :D Isn't he adorable? He's like a little doll! And Pitts - his friend calls him Sasuke Jr. isn't that cute?

Oh agreed snowy on the addition of the name. When I heard Nagano's voice perk up in the interview that they picked the name and he was almost anxious to say it.. you know it was something VERY special to him. Sounds like HE picked the name this time around and is very VERY proud of it. I love the sound of the name and knowing WHAT it means is even better. It's uber cute. Oh and ditto on the Nagano hospital pic.. LOL I forgot about that hideous blanket.. among other things.. ahahahah

LOL read too fast.. Chaki that's hysterical about the baby crying. You are dead right.. I haven't met a daddy that doesn't go "oh crap where's my wife.. It's screaming.. what do I do".. even if they have done it before.. it's amazing how cute babies are when they are asleep :D

Thanks for updating. It is appreciated

Awww he looks like his daddy! and Asaki probably the most adorable name ive ever heard!!!:D

No worries. I think you confused it for the name of Nagano's wife. Asami :)

Realistically, how many more tournaments do you think Nagao's got left? He eluded to possibly hanging it up soon on the pre show G4 broadcast of 22. I think if he doesn't get out of the 1st stage in 23 he might hang it up?

I find it amusing people think he's old. Forget that they all say if the Circle Glider actually Glided he'd be 2 time champion.. /smacksforehead.

You also have to remember that the interview they had with Levi was done approximately a week before Sasuke. Since then he did the radio interview (also on my blog) and he was pissed that everyone wanted him to retire. There's a difference between being past their prime and unable to compete because of major suckitude. Quite frankly I know Makoto is far from done. Sasuke would end before he's too old to compete. Besides.. he always does sucky in the cold months.. his best Sasuke's have mostly been the Fall tourneys.

Good points. Nagano is still the favorite in any sasuke he runs so that won't change anytime soon. All the info I had was from the G4 piece and it seemed from his answer he was going to stop soon. By the way, I love your blog. Keep up the good work, and I'm glad theres someone else who hated Levi's showboating. My GF and I knew somthing bad would happen because you don't want to displease the gods of mt midoryama.

Aaawwwwwwwwwwww he's so cuuute!!!
I'm going nuts...and look in the third pic...Nagano's look is so...so..."How could I think that pushing a button could be the best experience of my life??This is much better!!!!". He's even got a kind of wet-eye expression...ok i'm really going nuts now...
Why the hell I didn't check earlier...I already knew he was coming on june...well, now all south Italy will know!
Talking about Nagano's possible retirement...really, I don't think he's gonna give up, not after sasuke 21 (I agree about the circle glider thing). There's only one reason that could make him miss a tournament...problems with little Kaiou (loove the name =*).
Sorry for the long post, but I'm really gone mad! Bye

P.S. sorry for the bad english too

Your English is fine :D Thanks for posting! So how often do you hear about Sasuke in Italy? Does it show often?

Well, sasuke is quite famous here, but unfortunately it aires on gxt channel, so only people that have got sky tv can watch it, and even who has got sky doesn't often watch gxt because there is also a lot of trash tv on that channel.I casually found sasuke zapping! There are two episodes a day at lunch time (plus in the afternoon the same two episodes again): first stage is usually split in 3 episodes, then one episode for second and third stage. But it isn't as good as it seems...They aired sasuke 1-17 until march, and then I watched sasuke 18, 19, 20+kunoichi, then 18, 19, 20+kunoichi again!!! They didn't air sasuke 21 and 22 yet, they didn't even announced if they will show them or not. Anyway, I'm an addict, so now youtube+wikipedia = drugs for me.
As I said before, Sasuke is quite famous here, but there aren't any events, and national media never spoke about it. All I can do is finding spider walks and cliff hangers in my town to have some fun...death-scaring my mates. They don't expect a young girl spiderwalking in the school gym!

What's sad.. is that G4 is the same problem.. with otherwise trash TV with a stroke of brilliance by having Sasuke as part of their line up. I also figured you guys got the heavily edited G4 version of the show. Btw.. is it subtitled in Italian there? or dubbed by someone? I know in England you have a guy talking through the whole thing with no subtitles at all.. I think I'd go nuts.. I'm too enamoured with the original Japanese version... even if I can only get a couple words here and there I learned from anime :p

Yuri Chechi and Antonio Rossi host the show, but we hear the japanese original (low volume, when Chechi or Rossi are talking we nearly don't hear it at all). Those two guys don't do the job that the guy in uk version does, they just watch and give their opinions (This guy can't achieve the first stage, that guy can't pass the warped wall, minoru kuramoichi is mister octopus), often making jokes and mocking each other. Thery are quite funny! But I remember when Nagano was doing the metal tower in sasuke 17...Yuri Chechi was shouting like hell and just went nuts when he finally reached the goal!

I wish there were more versions like JET TV. Just subtitled so you can hear everything from the music they add on the TBS version to the sound of the crickets in the background to the sound of the audience reaction.. Still I'm happy that the popularity of the show is growing and spreading out everywhere :)

Just so cute. Congrats to the happy (hopefully happy) parents. He will be such a looker when he gets older. All the girls will be after him. He'll be nreaking a lot of hearts.