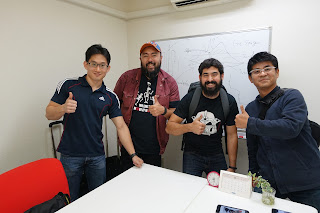 
In preparation for this month's Final Stage Podcast (which should be up tomorrow baring disaster), I asked if it was okay to mention one of the projects I'm officially associated with on the Podcast we recorded last night. I was happy when a Finding Midoriyama Facebook and Finding Midoriyama Twitter account was finally made public.  This is one of several projects that I've been either a part of, running or loosely associated with for the past year or so.  This particular project within the year.  Many of you who know me, have known I've desperately been wanting some sort of documentary on the history of Sasuke.  Sasuke itself lacks an official DVD boxset so the history of the show is being lost to time.  I wanted a way to bridge the gap between long-time Sasuke fans and new ANW fans who know next to nothing about the history of the original Japanese show. 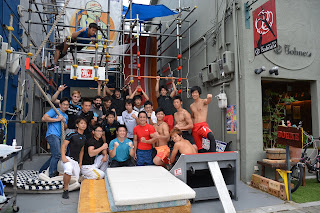 
Over the past couple of years I've had a couple ideas of how to do it on my own by doing a couple Sasuke history panels at AnimeNext (2014 and 2015).  However, I didn't have the voices of the competitors who lived through the process and baring some financial windfall, it wasn't going to happen anytime soon from me.  Over last autumn I was contacted by a couple of men who had an AWESOME idea to do the very thing I hoped.. plus more!  As a personal side project, they are creating my dream.  It would be a documentary interviewing everyone within the Sasuke community to talk about the history of the show, how it has evolved over the years, it's impact on American soil and it's expansion worldwide.  They named the personal project "Finding Midoriyama".  It follows the story of these two men learning about the show they love through the eyes of those who lived it. 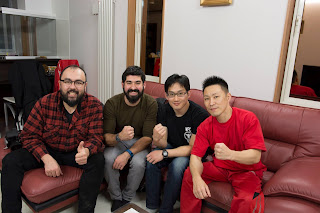 
Many know of "Midoriyama" from the G4 days and it's tie to the original "Ninja Warrior" show that sadly is off the air in the USA.  What started as a link to that show has turned into a huge journey across the world.  Eager to speak about the history of the show, it's impact on their lives and their hopes for the future were none other than Sasuke's elite.  Starting with the man himself, Sasuke (Japan) Director Masato Inui 乾雅人 the wild ride became a loving trip down memory lane.  His involvement and viewpoints on the very creation of this show is astounding and truly exciting. I can't wait for people to see his interview in particular.  Understanding how the show was created, the foundations of the show, the mythos behind the "Steel Castle" is something I'm really happy is finally on camera.  My personal favorite was when the documentary team went to visit.. in person (I'm so damn jealous you have no idea omg omg.. ehem..) the first ever Grand Champion, Sasuke All Star Kazuhiko Akiyama 秋山和彦 at his home in Hokkaido Prefecture. 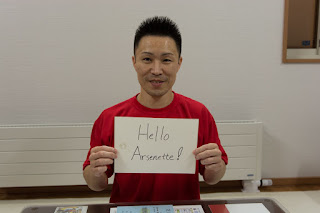 
What followed was a glorious interview where he talked about the humble beginning of the show and the evolution of Sasuke from his perspective.  I also got a shout out that I TOTALLY DIDN'T KNOW WAS GOING TO HAPPEN!  I did know they were going to interview him and I had a chance to lob some of my own personal questions I had for him before they headed up north to see him.  So after the time of the meeting I got an email from my friend Jin (who has been doing yeoman's work as interpreter for the project) with a really awesome prezzie!  Another one of the collection of "Hello Arsenette" signs has been acquired! AHAHAHAHAHAHA I'm so happy it has taken a life of it's own!  Thanks Jin for helping a girl out! ♥ 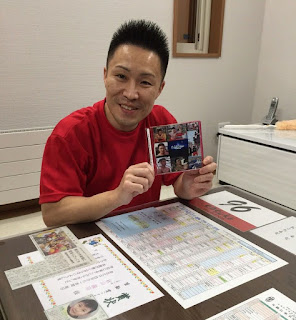 
What's even more amazing is that he remembers EXACTLY who I am.  What's even more amazing than that is that he not only remembers who I was, but who my friends were and what we did for him YEARS ago.  Back in 2009 a few of us gals got together to create a care package for him and his family.  They were struggling through a family crisis and we just wanted to cheer him up. Out of all of the competitors, he's easily the most forgotten.  However, all of you should know by now that he is still my All-time favorite Sasuke competitor who just so happens to be the first champion. When the documentary team asked if he could pose with that note, he recognized the name!  He then opened up his desk drawer to reveal the music CD I created for him!  He still has it.. 7 years later! In his top drawer too!!! GAAAAAAAAH FANGIRL OVERLOAD TRIGGERED! ♥ 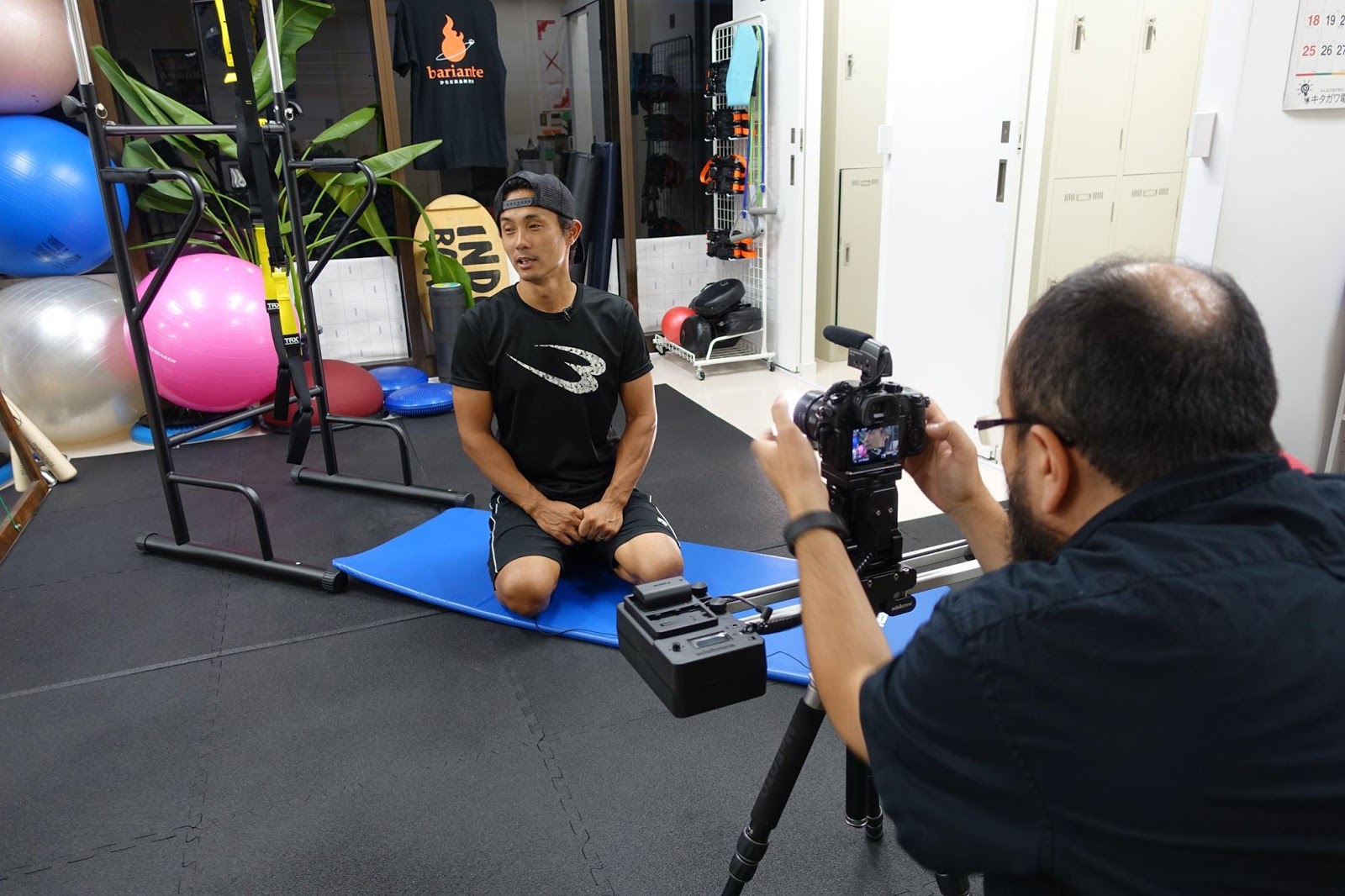 
Soon after Inui's interview came Shingo's interview.  It was an amazing history lesson from the only man on Earth who has lived through the entire history of the show - Sasuke All-Star Shingo Yamamoto 山本進悟.  I want to thank ALL of the people who participated so far and all of those who are set to record their interviews. This documentary is a labor of love.  It's a way to document the history of a show who right now is overshadowed by the ANW behemoth here in the West. I'm excited that so many people from both sides of the Pacific are so eager to share their stories.  It is a way to give back to the long-suffering Sasuke fans in the West while introducing this show to a whole new generation of fans who missed it the first time around! 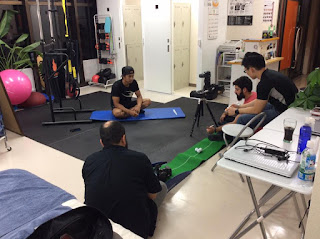 
Given that this is a personal project and all interviews are being weaved in between professional obligations, it will take some time to complete the documentary.  The hope is to have it completed by the end of 2016 with a tentative 2017 worldwide release.  The project will be free to view online and subtitled in English.  The purpose of this is to share the conversation with every Sasuke/Ninja Warrior fan around the world. I look forward to the journey and am elated we can finally talk about it publicly! I told ya there were a lot of things going on in the background. LOL  Any updates on the progress of the project will be posted on their Finding Midoriyama Facebook and Finding Midoriyama Twitter accounts!
Posted by Arsenette at 12:32 PM

An interview from Akiyama. That made me happier than I would've guessed it would. You are right and is way more forgotten then he should be.

Whoa this is such a cool journey to go on can't believe it's all going to be documented for us all to enjoy.

So excited for this! I've thought about tackling the "History of" concept before to try and enlighten American audiences a little. A Sasuke documentary is something I've never seen before and has great potential! I would never be able to get exclusive interviews on my own, (I would need stuff like help with translating) and as we know it, nothing is more authentic than to hear from the people who have done it, who have lived through the history of this show. Akiyama has me stoked!

So. Happy. OMG will they interview Morimoto? That would be great! Honestly, all of my Sasuke came from Youtube, you and Sasukepedia, so it would be nice to see some more! Where will they be putting the documentary?

Morimoto is already interviewed. ❤️ Nagano was interviewed this weekend. It will be free on YouTube. I'm thinking late this year or early next year.