On a personal note, as I've mentioned before, I hosted my very first Sasuke panel at an anime convention called AnimeNext.  The panel was named "Sasuke/Ninja Warrior Impact in the USA Market".  My goal was to cover the history of the event from it's inception in Sasuke 1 all the way to present using the lens of the foreign viewer. At long last I finally got the videos up on YouTube!


The first one I posted was a short 1 minute highlight reel of the convention grounds.  This also served as test footage to see if I can get videos on YouTube now that they were forcing people to convert to Google+.  Everyone knows I hate Google+ so I refused to convert to that (as my YouTube account predates Google's buyout), and I wasn't sure if I could upload again.  I can! I just can't comment on anything without being a Google+ member (and I refuse to be).  So I won't be commenting.  Trust me, no one needs me commenting on YouTube anyway. LOL!


The 2nd video is the actual panel itself. As you can tell from the run-time.. I barely made it in the 60 minutes allotted! LOL I had 2 staffers come up (you'll hear it in the video) and let me know how much time is left and I made it with about a minute left on my time. LOL!  I know now what to cut out, what to reorganize, what to add, etc. Obviously I see all my flaws and it irks me.  I guess you could call me a perfectionist.  Surprisingly though, people enjoyed it and asked for me to return next year.  I'm shocked... Then again, the biggest shock came from the fact that everyone in the room (with the exception of the 2 SMF members) came because they saw American Ninja Warrior and were curious about the original show.  Luckily I labeled the panel correctly and they knew what I was going to be talking about before they lined up to see the panel. I was surprised that I was given the largest of the fan panel rooms.  I'm happy the room was filled (shockingly some people were turned away..) and I didn't do a panel in an empty room! (which was my fear)  I'm even more surprised that everyone thought Sasuke was cancelled!  Seems NBC successfully pulled off the ruse. That's a common trend I keep hearing. TBS is also hearing that in Japan from their own viewers. Here in the USA the same thing is happening as ANW gets bigger. 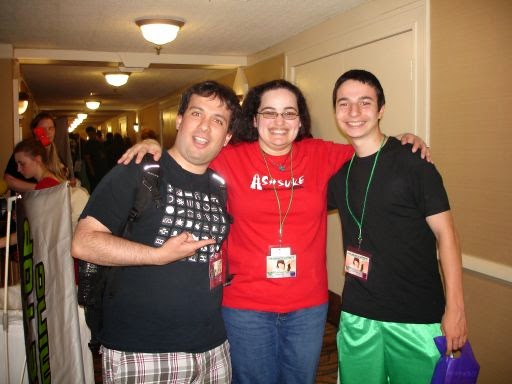 Special thanks to William Marchese from TwoDashTwo for recording (in glorious HD....) my panel from the front (projection screen and most of the video).  Hubby also did his bit on the side but I didn't have a tripod for him. (LOL)  You can tell the quality difference when I do the switch from my camera to William's camera.  The difference was stark! Either way, most people don't want to see my ugly mug so I'm eternally thankful to William for recording the screen.  It also helped me out greatly to fine tune the panel for the future as I can see where I can fix the issues I had as I was presenting. Also thanks to both both SMF'ers for driving out to help support me! Was nice finally meeting you guys face to face! 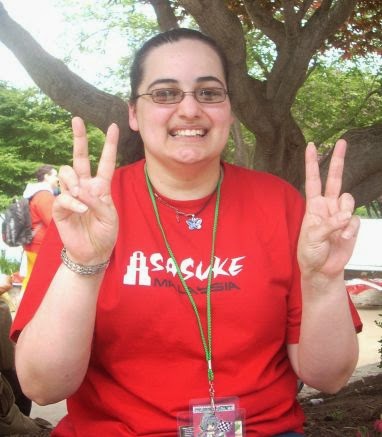 Yeah.. that ugly mug is me.. ©William Marchese


Finally, overall impression of the con was.. OMG THAT WAS A LOT OF PEOPLE! LOL (Just under 12,000 people I'm told) And, it was hot! You can tell from the two photos, I had my hair up in a pony tail most of the day then took it off for the panel.. omg I look horrible when I do that.. I need to commit to one or the other. I mean seriously.. if I'm going to do that I should own up to it and move on right?  (the photo above I was dying.. I had to sit down..  it was friggin' hot!) LOL But pleaaaaaase.. anyway I had fun, but I don't have the stamina to do a lot.  It was my very first anime convention and I'm happy I went. It was quite the learning experience.  I'm happy my body (and head) cooperated that I was able to do that event.  I did have fun with the panel though and ya'll know by now I can talk about Sasuke for hooooooooooourrrrrrrrs.. so imagine how difficult it was to make a concise presentation. That said, I knew there would be some new people, however I was surprised by the entire panel room filled with new Sasuke people! I was shocked!  It does give me a window as to how to tailor this panel for the future and what obstacles are left to overcome in educating the USA on the current state of Sasuke.  Challenge accepted!
Posted by Arsenette at 12:39 AM

Sooooo proud of you my girl! Sasuke historian extraordinaire!

So glad things went well for you and I hope you come back in 2015. Thanks for bringing the panel to our con.

Happy to be of service.

1. You could so tell who in the crowd were from SMF by the fact that they're the ones calling the reused obstacles from Viking by the original names. (g) Speaking of Viking, the Prince of Tennis Musicals have ruined the name from me... see http://youtu.be/Mq98Bb-IHXs (although I do prefer Viking Horn from the first season's HigaMyu). Please picture the All Stars singing that. (g)

2. You may take a wild guess about which sentence I said in complete sync with you as you said it. Hint: it's a way to describe a certain STQer. LOL.

3. You know you're an otaku when you pretty much recognized every anime shown as examples of stuff TBS has aired - and you know you're an older one when you didn't need to see the ship to recognize Yamato. I was actually surprised that people needed to see the ship - c'mon, 2199 was recent! Then again, when I can go to a con, it's usually Anime Weekend Atlanta, which usually has something Yamato/Star Blazers there, so YMMV.

4. Many thanks to Inui for being so helpful to you! I especially liked learning about how Shingo and Yamada helped save Sasuke (twice in Shingo's case). Very interesting.

All in all, very good, and I will point my friends, who are NW/ANW fans, here for some more education (I already do, in general, for this purpose, actually.)

Thanks everyone for the kind words and support! :) I'm happy everyone seems to like the post and the video! I wasn't sure how it would be received honestly.. LOL

Thanks Chaki! I count you as one of my inspirations! Love your work and hope to be at least in the ballpark when it comes to the quality!

Thanks Vince! I appreciate the opportunity. I was worried how my first panel would be as I haven't done public speaking in about 10 years. I'll check up with you next year! Thanks for letting me in with no prior experience.

Ooooh 2D2Will thanks for being a lifesaver! Appreciate you driving all the way out for it!

Thanks Boiling Pot! I still have to fine tune it as I really have to realize how many new people there are. I need to restructure some things to make sure that even new people can digest it.

Hey Jenn! Glad you liked it!
1. LOL I've never seen that! Giggles now you ruined the name for me too! ahahahhaha

3. I put both photos on purpose. I recognize Yamato (even 2199) by the uniform. And yes we are totally dating ourselves knowing that was "Starblazers". However, it's not streamed anywhere so only the piraters (cough...) would have seen the newest iteration. They really need to put this sucker on Crunchyroll. It's friggin' awesome!

4. I'm always fascinated by the behind the scenes stories that Inui has. Once I get the book thing up and running I can't wait to get everyone's stories in one place. I love reading that stuff on my own!

My comment is basic. It's nice to finally put a face to the queen of sasuke. :-)

1. I finally succumbed to the Prince of Tennis musicals within the past year, after holding off as long as possible because I knew I would be addicted to them (I love the source manga/anime, I love musicals, and I knew a good number of the cast from tokusatsu). That particular video was from Dream Live 2013, a concert of songs from previous musicals with additional skits/crack (and some good daily guests, since it was the 10th anniversary of TeniMyu - you might recognize the name of the 1st season cast member who returned in this clip since he's a pretty famous seiyuu now, although he totally hams up part of his performance when he deliberately botches a dance step, LOL). Actually, since you've watched SpoDan, some folks there are TeniMyu alum - Takigawa Eiji (or as Ube calls him, Crystal Takigawa's cousin) and Seiya.

The sad thing is that I can totally picture certain Sasuke dorks singing that song now (coughShingocough).

2. "The lucky bastard who got Bunpei Shiratori to speak at his wedding."

3. Like I said, I'm spoiled by the anime fandom in the South, since AWA (possibly since it's been having cons since 1995, and the organizers are older fans also) usually does something Yamato/Star Blazers based. I'm actually surprised not to see Amy Howard Wilson as a guest - she's usually the sole exception to having done something recent rule. As for 2199, it is licensed and the first two of six volumes is out, but it is sub only and still somewhat expensive, and has a limited print run. Why Voyager Entertainment a) took so long to release it when the Japanese Blu-rays already have English subs and b) haven't decided to stream it is beyond me.

4. Again, it is awesome that Inui is working on this with you, so that fans can really know what's going on.