Edit: Added 1 more photo with Team Japan at the end of the blog. 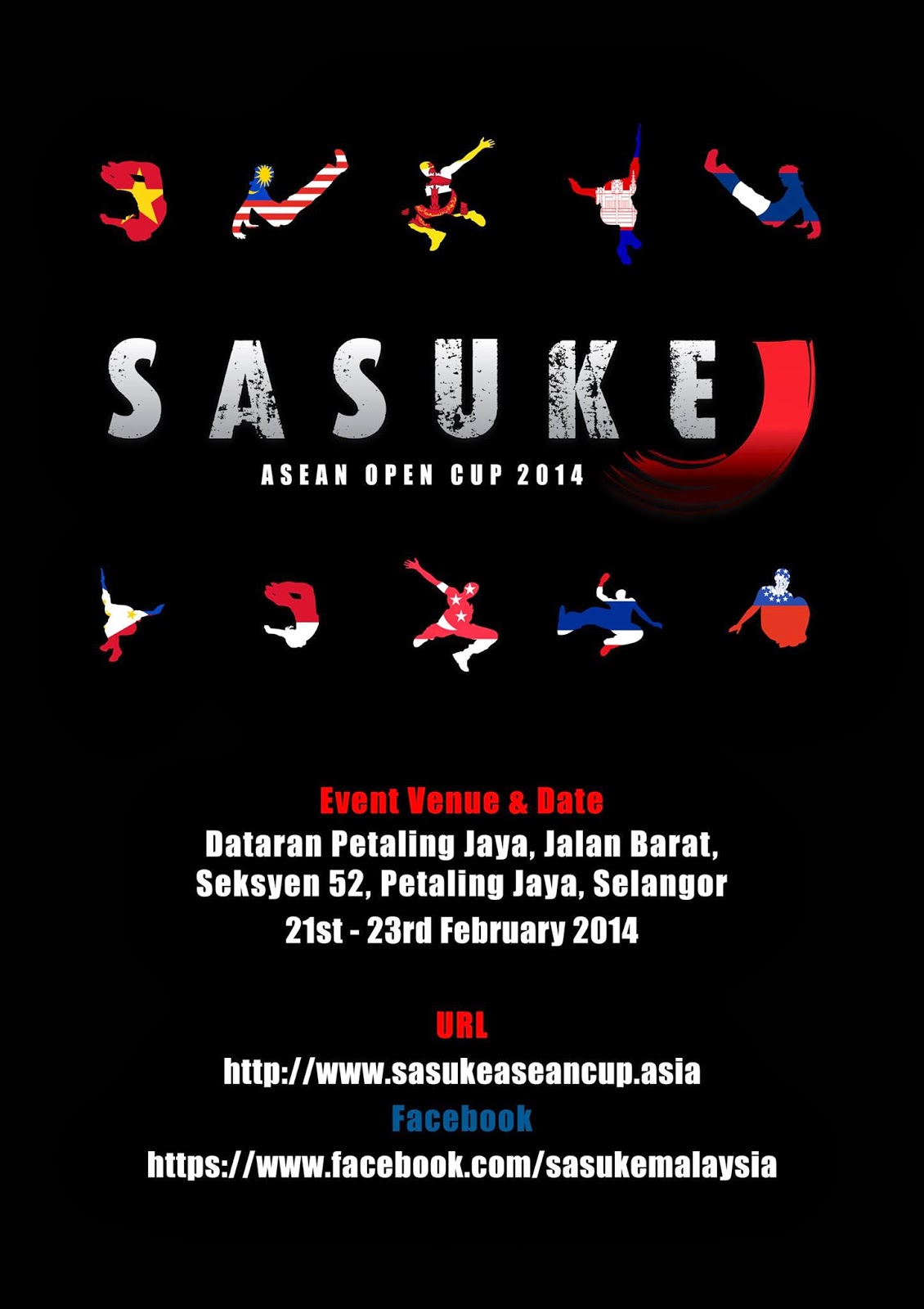 At long last the inaugural Sasuke ASEAN Open Cup (2014) has arrived!  The day is finally here! Under VERY hot weather conditions in the South Pacific (35C/98F) this event goes from now until Sunday! 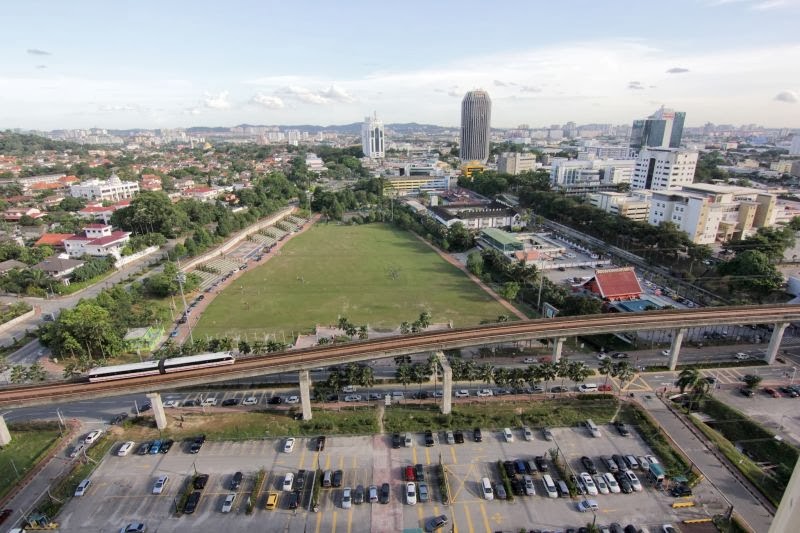 Before that, the week before the tournament was to start, the location changed to Dataran Petaling Jaya.  I actually I agree with many on SMF members that prefer this open field rather than a stadium.  It's open to the public and easily viewable from any angle.  (and yes that's the train station running across the bottom of the screen)  Hey, remember Sasuke 1 was inside of the Tokyo Dome with a small modified course! I find this to be much more suited for Sasuke. 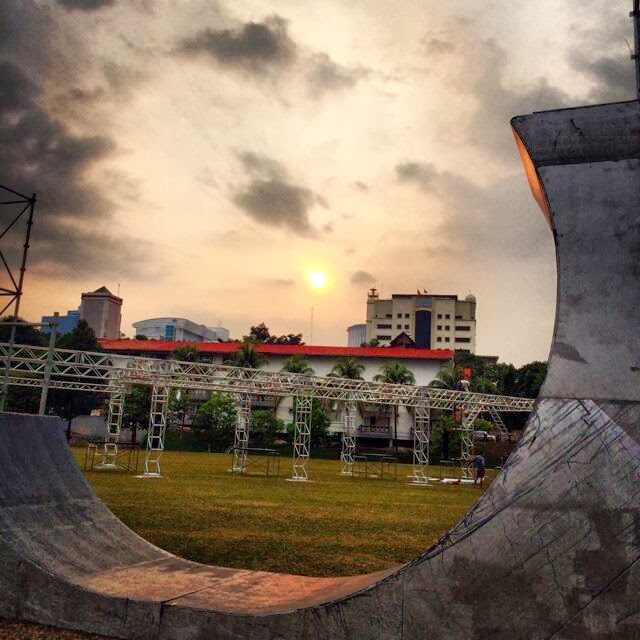 Sun setting over the course a couple of days before the event starts ©Masato Inui
Thanks to twitter and other social media we've had a few photos already posted online of the course layout.  I knew already that this is a much smaller scale event and differently laid out. As a result I was not disappointed over the smaller scale of this event.  It's still much larger than Sasuke Malaysia and I thought that course was just fine. 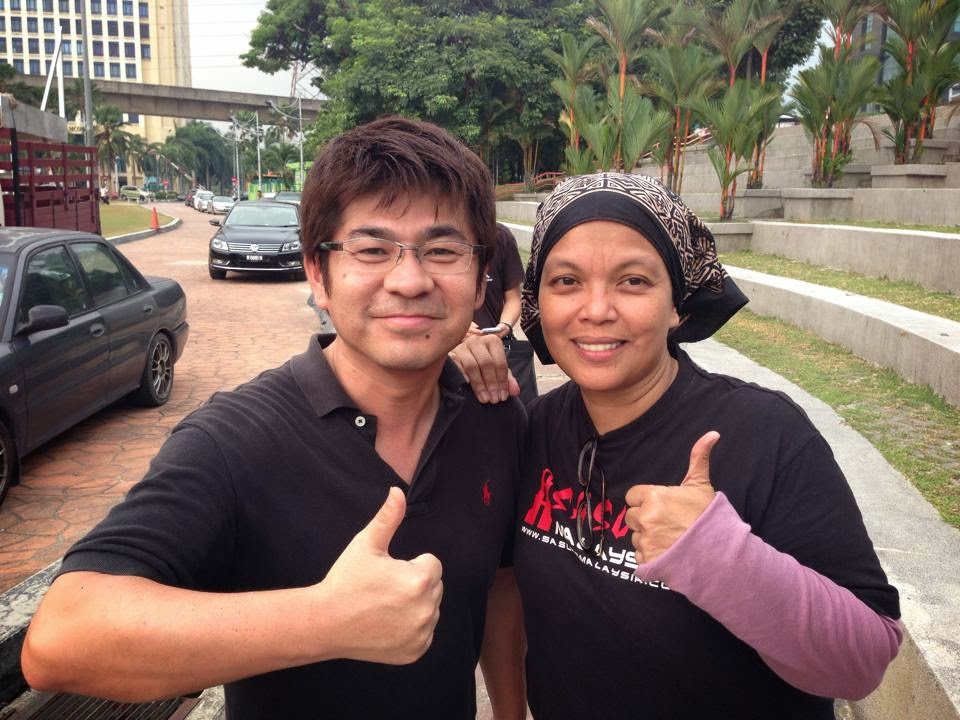 Sasuke Director Masato Inui 乾雅人 and Sasuke Malaysia (and Sasuke ASEAN) Director Zai Joehurry ©Sasuke Malaysia
Sasuke ASEAN organization as a whole is the brainchild of Zai Joehurry. She brought us Sasuke Malaysia and has been working hard to get all of the other South East Asian countries involved. This is a nice place to start as the event grows in size, prestige and experience.  This will be a regular event with direct ties to Sasuke Japan. That alone makes me VERY happy. 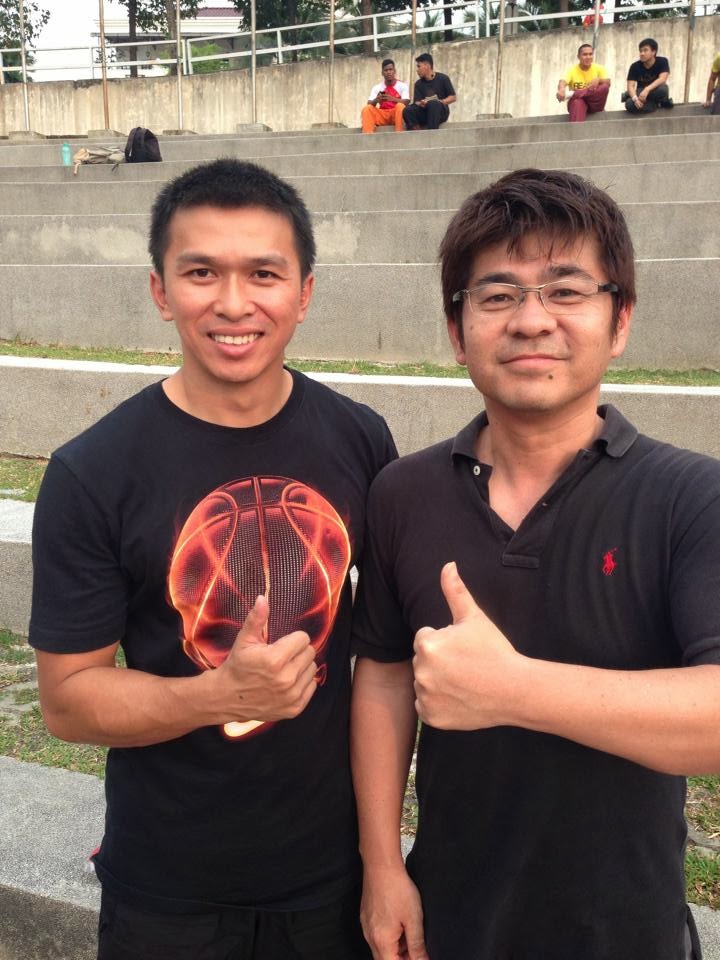 Sasuke Malaysia winner and Sasuke 27/28 veteran Farid "Cat" Isham モハメド・パリド・イシャム with Sasuke Director Masato Inui 乾雅人 ©Masato Inui
Of course, those of us who have heard the name Masato Inui 乾雅人 but never knew what the looked like, here he is!  He is a veteran Director of Sasuke 1-14 and then again with the current reboot "Sasuke Rising" (which we know as Sasuke 28 and 29). 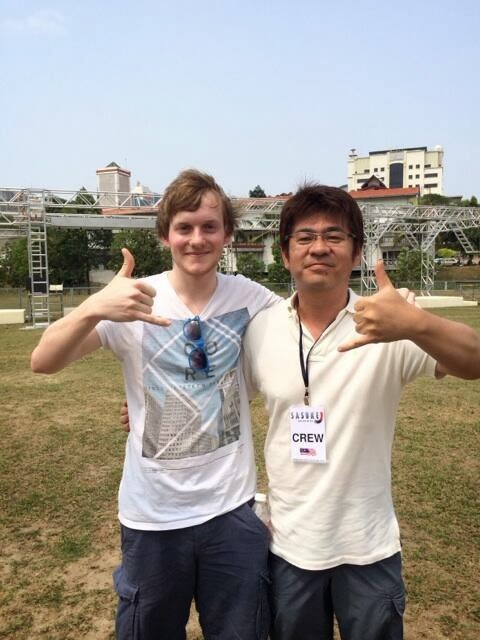 Perry Oosterlee with Masato Inui 乾雅人 ©Masato Inui
I'm excited to see foreigners making the blind leap to Malaysia even knowing the event was going to be small.  This is actually a long-time Rambling Rican reader, Perry Oosterlee of the Netherlands (not Holland!). 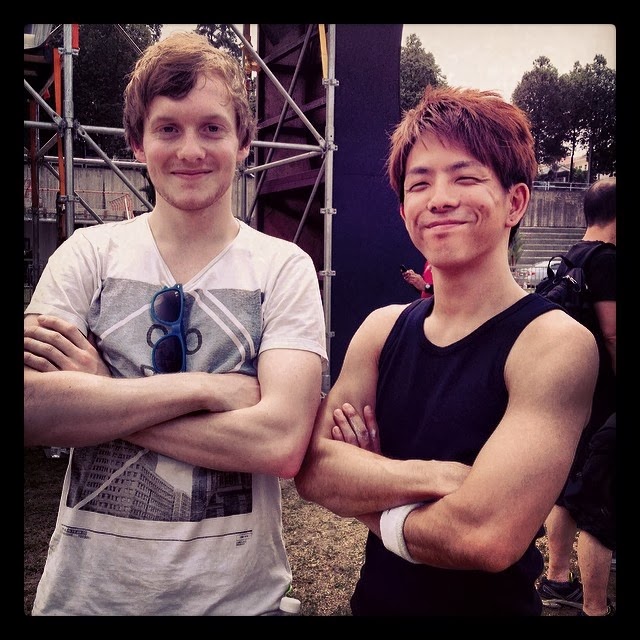 Perry Oosterlee from the Netherlands posing alongside Japan's New Generation Star Ryo Matachi (Cliffer #2) 又地諒 ©Perry Oosterlee
I can't wait until tomorrow until we see more foreigners show up for Day 2 of qualifying (Open qualifying including walk-ons). More on that later.  Again, this is a smaller event but I'm glad to see it's birth after a very long year of planning, postponement and general frustration. 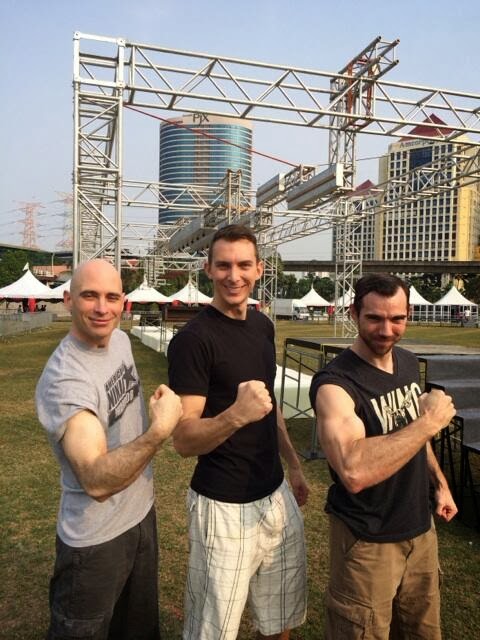 Team USA posing for the Sasuke Director
David Campbell デイヴィッド・キャンベル, Brian Kretsch and Ryan Stratis ライアン・ストラティス ©Masato Inui
Also flying halfway around the world are Americans.  A couple of Sasuke veterans in (Sasuke 22, 26, 27) David Campbell and (Sasuke 27)  Ryan Stratis. I've been hearing there are more ANW stars on their way (or already there) but I haven't seen photos yet.  I'm sure I'll see more as the week wears on (their qualifying day is Tomorrow, Friday, February 21). 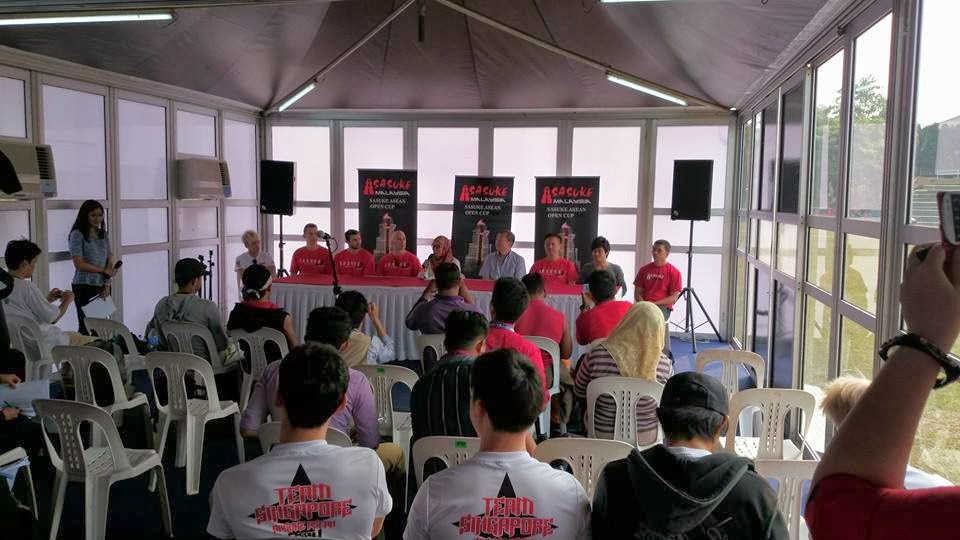 Foreigners in the media tent ©Sasuke Malaysia
Given the size of the event it was a rare treat for the organizers to see the foreigners come in, so they set up interviews with them.  This is the media tent.  I'm sure a cool respite to this ridiculous hot weather they are having. 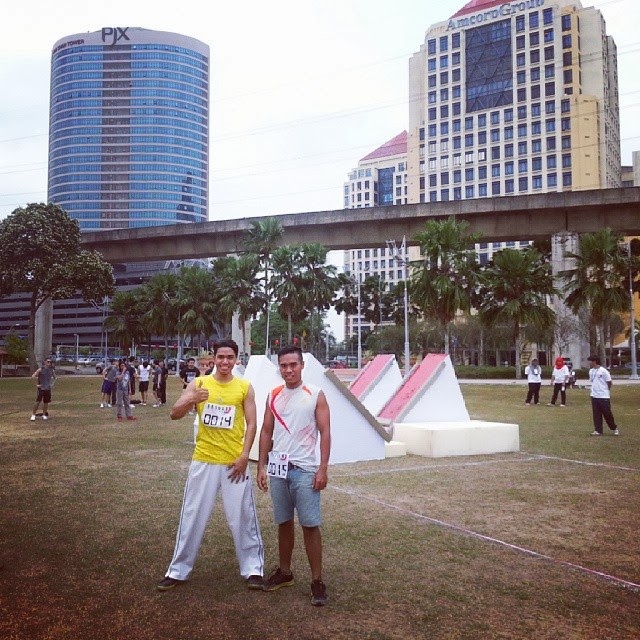 Qualifying started today (Thursday) for Malaysia. (Remember they are 13 hours ahead of the East Coast USA where I'm located) It's a simple test comprising of 2 short parts.  The way this works is between Day 1 and Day 2 a total of 100 top times will be selected to move onto the main event on Saturday's Individual Competition. 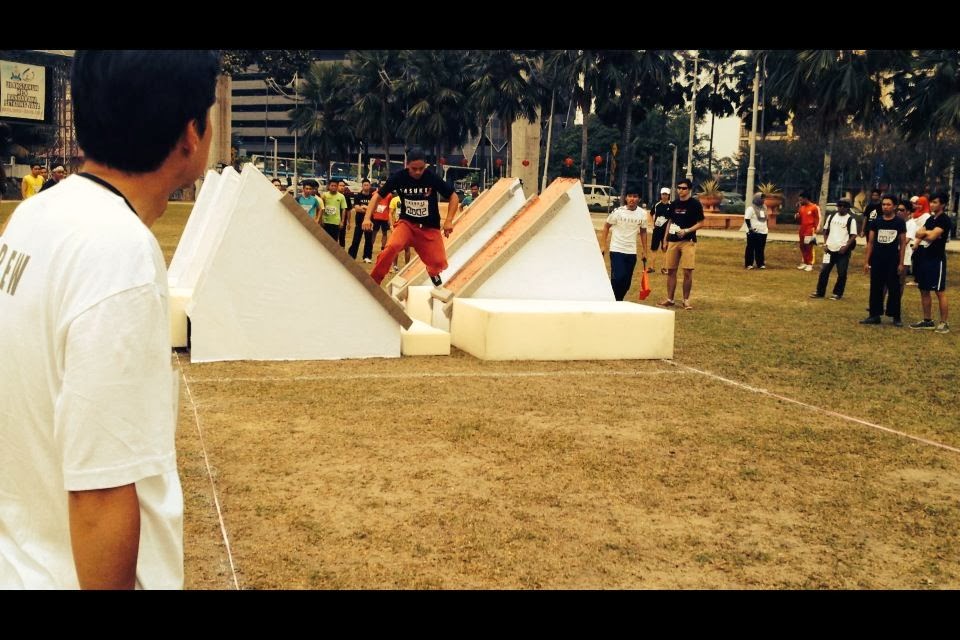 The first part is the Sextuple.. er... Quintuple.. hang on.. which is it.. without the "landing" jump I can't say "six".. so.. "five"?  Okay dammit I'm committing to Sextuple Steps (Rokudantobi 六段跳び) since that had 5 actual steps.. let the "jump" onto the field be the 6th. Anyway there is a chalk line where you have to jump over (or be disqualified) so that's my 6th step. 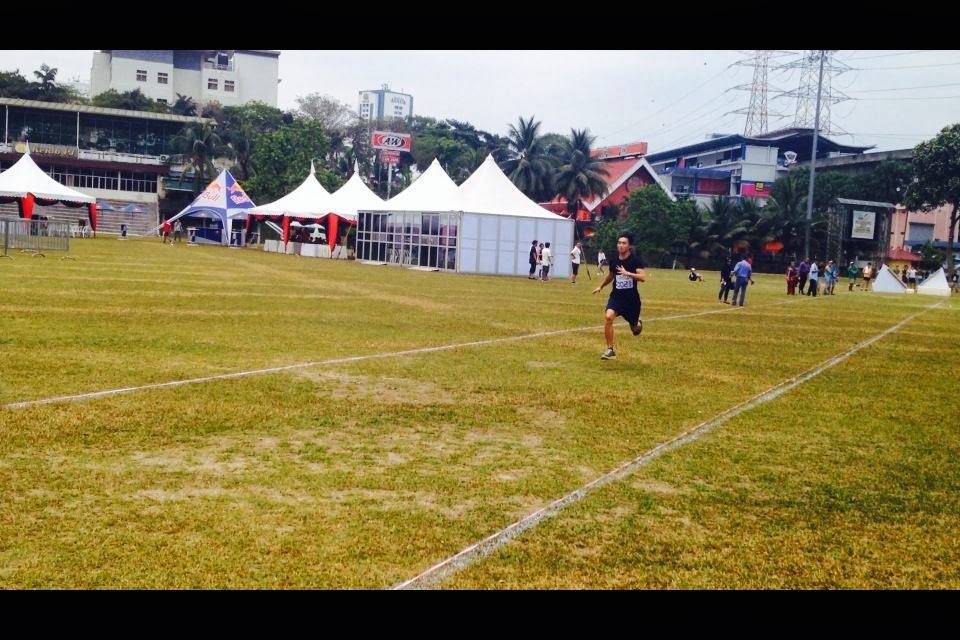 From there you haul across the open field (I think I read it was 60 meters?) to a couple of judges with stop watches to take your overall time.  For those who succeeded past this, their times will be compiled along with Day 2 competitors (Friday) to take the top 100 times overall to move on to Day 3 (which is the main event I mentioned before) which is the Individual event. 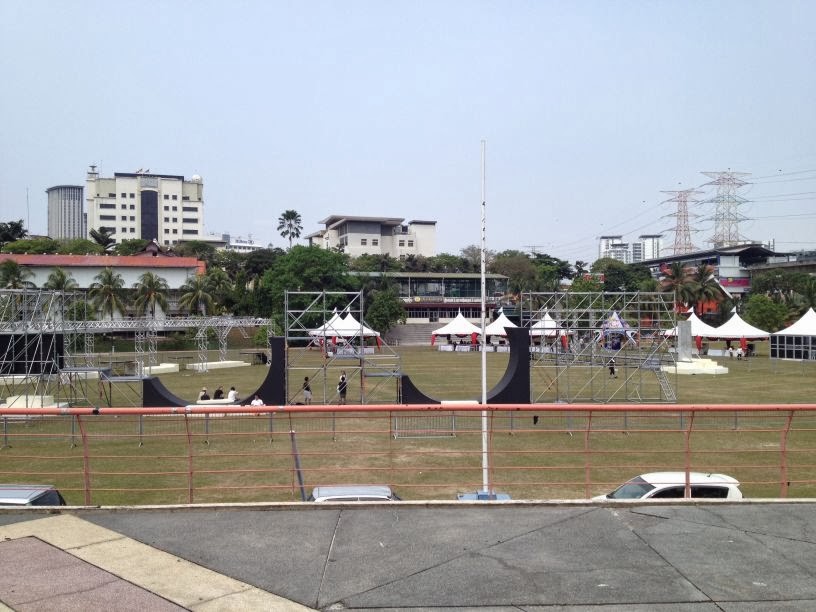 This, is the main event. This course will be used for Saturday's Individual event and then again on Sunday's Team event. I'll go across the field as best I can and describe how this works. Each are broken up into 3 stages. The reason they are doing this is to have 3 groups running simultaneously like in the Olympics. (Gymnastics comes to mind where groups go around the apparatus and compete at the same time as everyone else in the other groups). The top 100 will be divided in 3 groups: A B C. Every group will do the stage there and everything will be timed. If you clear an obstacle, you get points. Fail: then you are disqualified and cannot try that stage again. Each group will rotate around the 3 stages until they all get a chance to complete the entire course. You'll earn a medal for clearing a stage (everyone who clears it will earn one) and you'll get a medal for the top time of a stage, also a medal for the top time overall (of all stages). Also, you can win a prize money (amount unconfirmed). 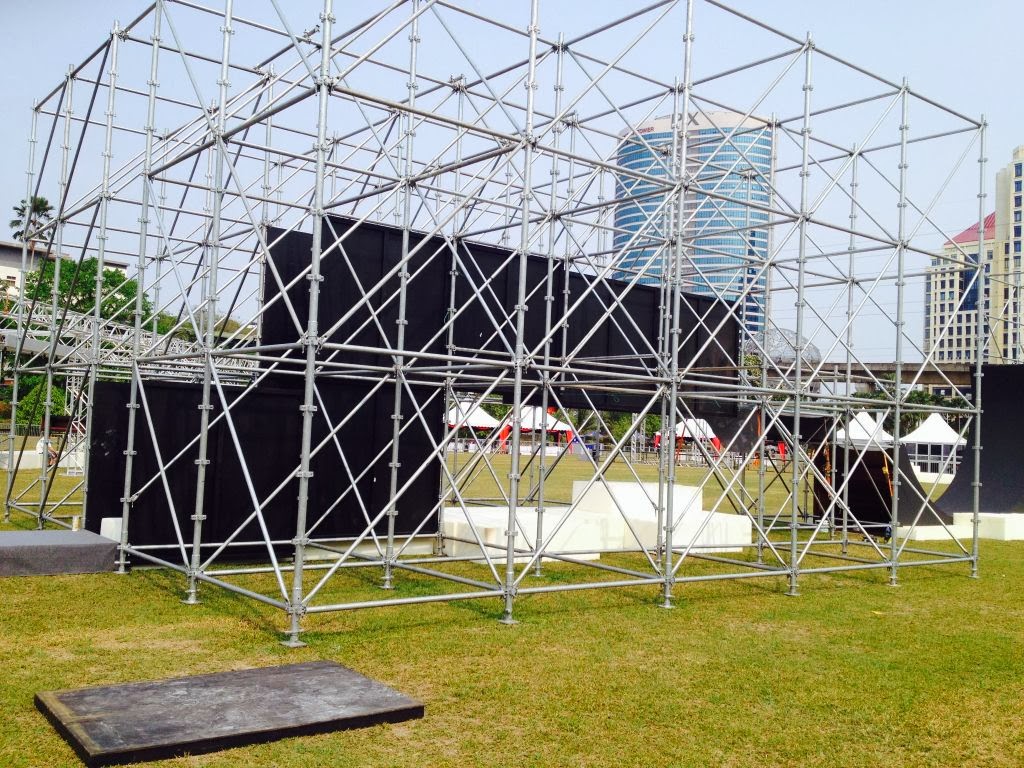 The first of the stages people will be going through are made up of 2 obstacles.  The first is the Spider Walk (スパイダーウォーク).  In this photo it's the black walls between the rigging. There are no mudpits or swimming pools so, if you fall they have foam padding to try to save you.  The start-line is from the left of the photo and work your way to the right where you go into the next obstacle... 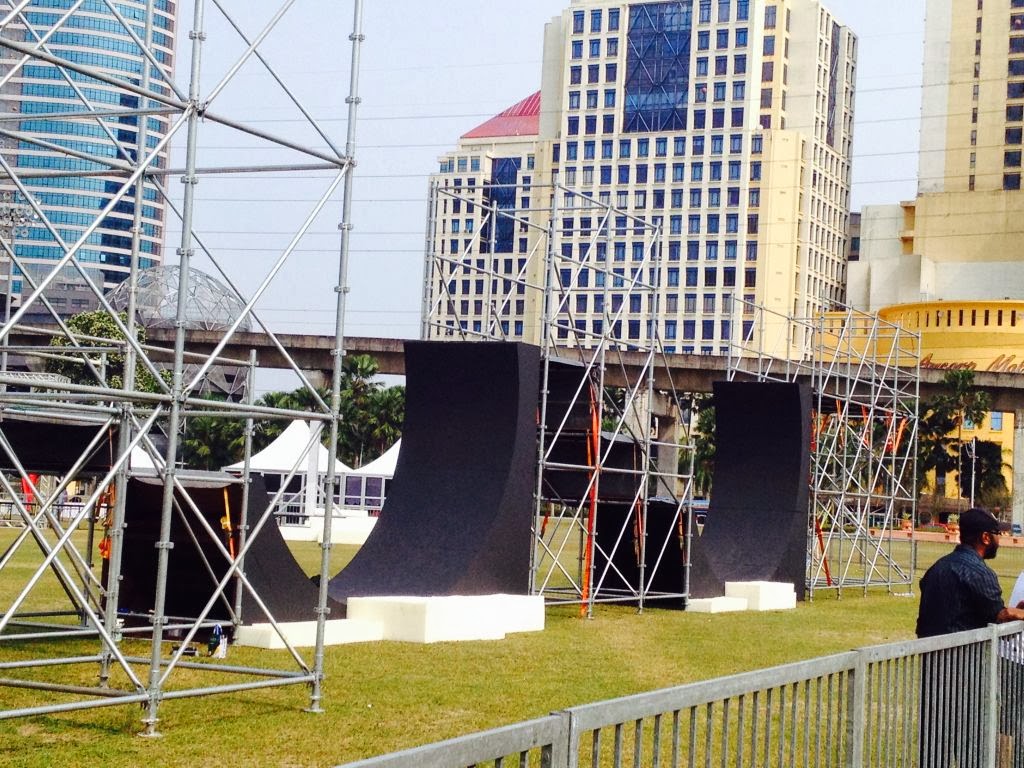 .. which is the Ni Ren Soritatsu Kabe (2連そり立つ壁) literally "Double Warped Wall".  These are the same size as Sasuke if I'm told correctly.  Ya'll can confirm that later.  For those unfamiliar with the walls, the first wall is shorter than the second wall.  Obviously going left of the photo to the right of the photo to complete this section.  This of course will be timed. 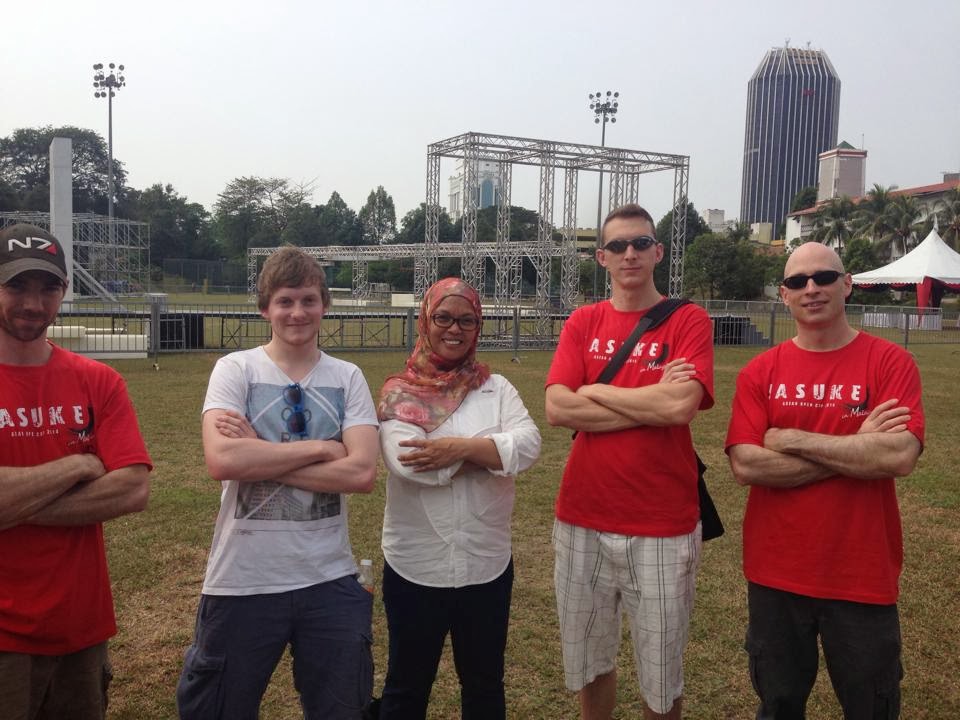 Foreigners have arrived!
Strat, Perry, Zai, Brian and David ©Sasuke Malaysia
Why am I showing this photo?  Well the next stage is what is behind them.  The rigging that is in place (since the walls were not put in until the main event on Saturday) will be for Wall Lifting (ウォールリフティング) comprising of 4 walls if the information is correct to be immediately followed by .. wait for it.. The Gallon Throw (ザ・ガロンスロー) YES!  From Sportsman #1! Mwahahahah Do you see the big concrete barrier? Yeah.. that's it. And yes this is timed! I'm literally jumping in my seat as I type this! 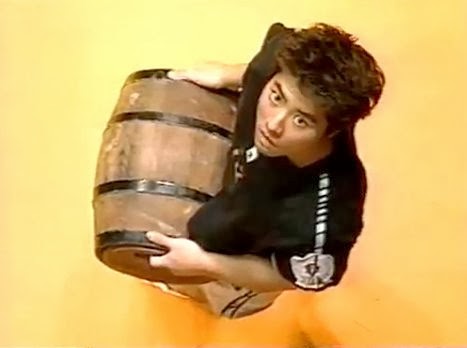 Kane Kosugi ケイン・コスギ during Sportsman #1's Gallon Throw event
For those who have NO bloody clue what I'm talking about, there was a brief description on my last Sportsman #1 blog from a few years ago.  This is where someone takes a barrel, throws it over their heads and hopes to clear a barrier behind them.  Shown here is veteran Sasuke competitor (and overall hottie) Kane Kosugi who's looking up to see the wall behind him!  I'm not sure if they will be using barrels like these but you get the gist of the overall set up. 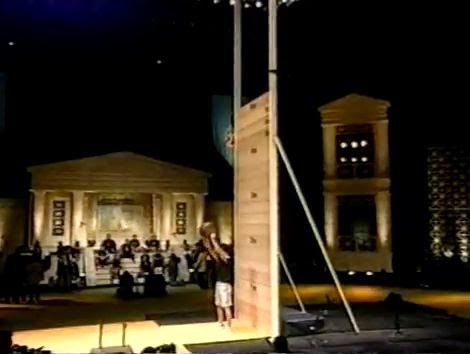 Kane Kosugi ケイン・コスギ during Sportsman #1's Gallon Throw event
The competitor turns around with his back facing the wall.  Then they throw the barrel backwards in hope they throw it OVER the wall.  An approximate distance for the Sasuke ASEAN Open Cup I'm told is roughly 3 meters. I'm sure I can confirm that stuff later, but for now you get the gist. (btw this wall in the video is much taller I think this was 5 meters) 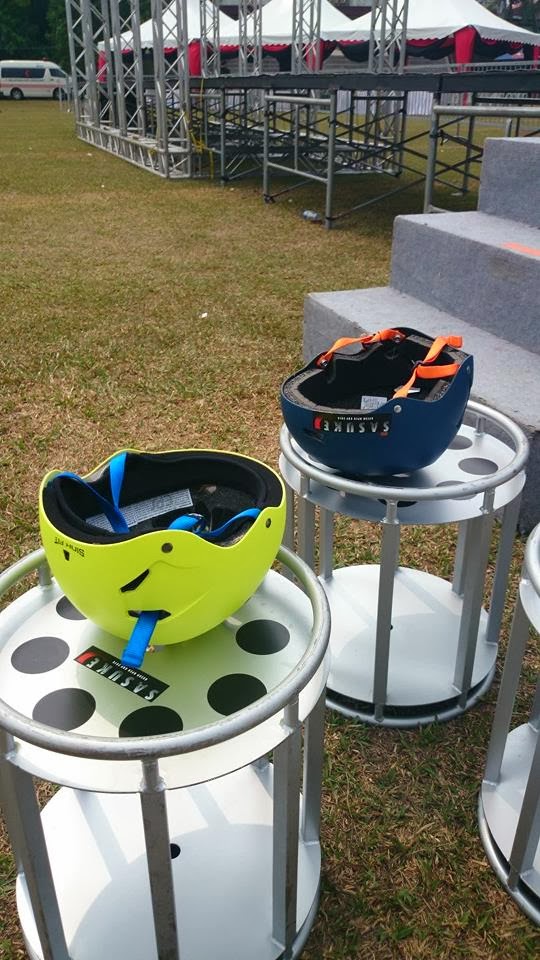 I saw helmets on the Sasuke Malaysia website at the base of concrete poured steps  I'm sure it's for this obstacle in particular.  One of the many ways you can fail this is the barrel careening back at you as it bounces OFF the wall. And yeah.. that's a safety concern. OH I wish this was televised... 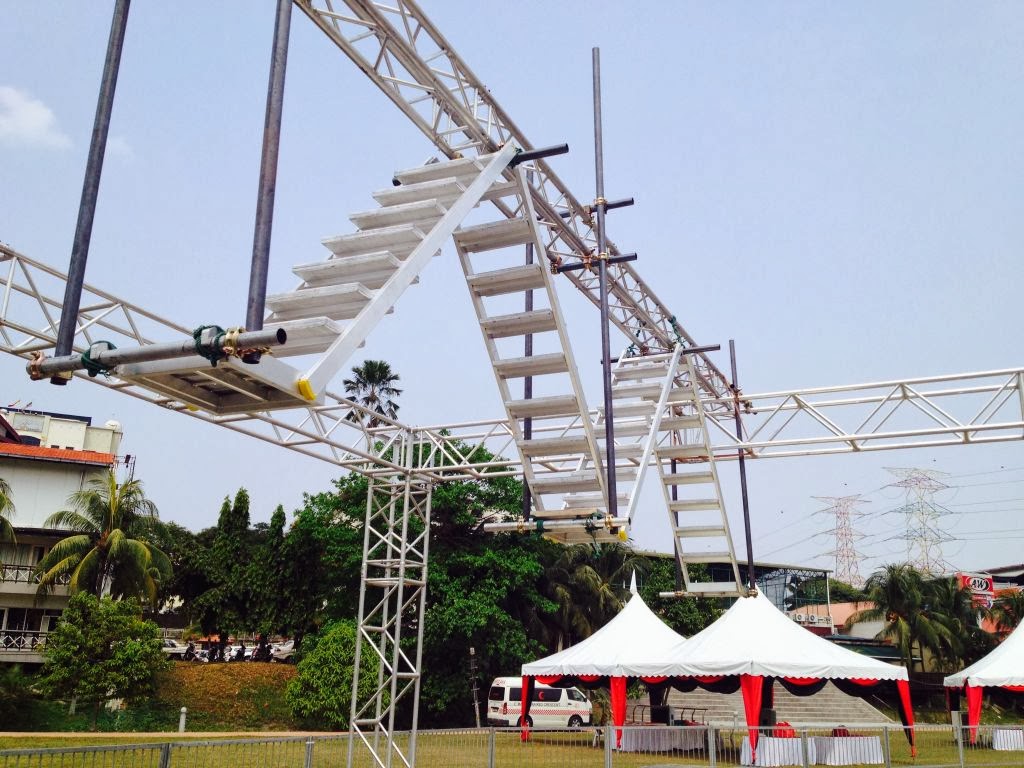 The last of the stages competitors will be rotating around during the day is comprised of 4 obstacles. The first of which is actually an upgrade of the original Devil Steps (デビルステップス). This one I'm calling the Double Devil Steps. When you get to the bottom of one step you go back up and down on the other side.  (On this photo you move Right to left) 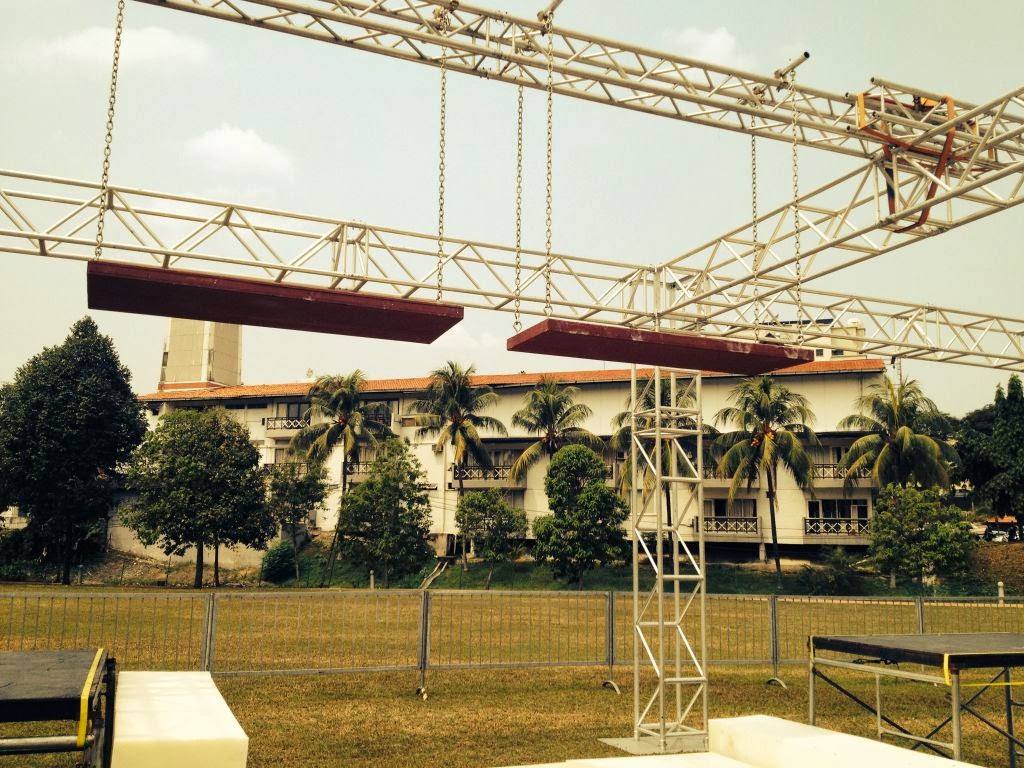 Immediately following the Devil Steps is the Unstable Bridge (アンステーブルブリッジ).  (again following Right to left on the photo) 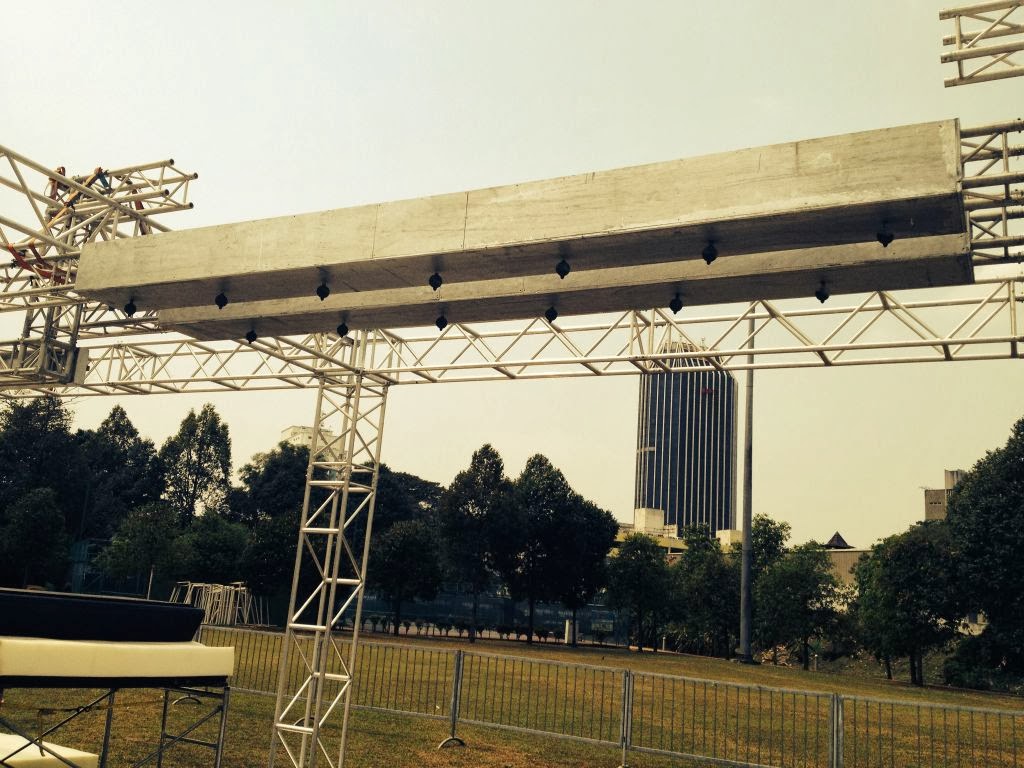 After that is the Lamp Grasper (ランプグラスパー), known as the Globe Grasp in English broadcasts. 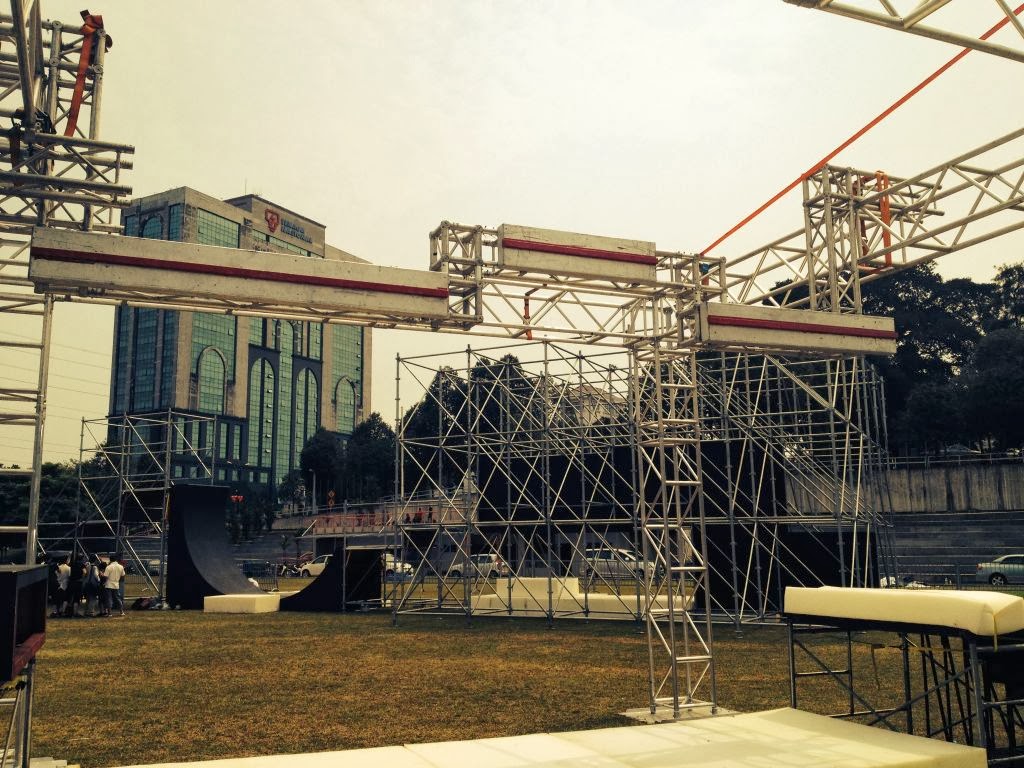 And finishing with a Sasuke 9-17 version of the Cliffhanger (クリフハンガー) which is actually known the クリフハンガー改 (literally Altered Cliff Hanger). 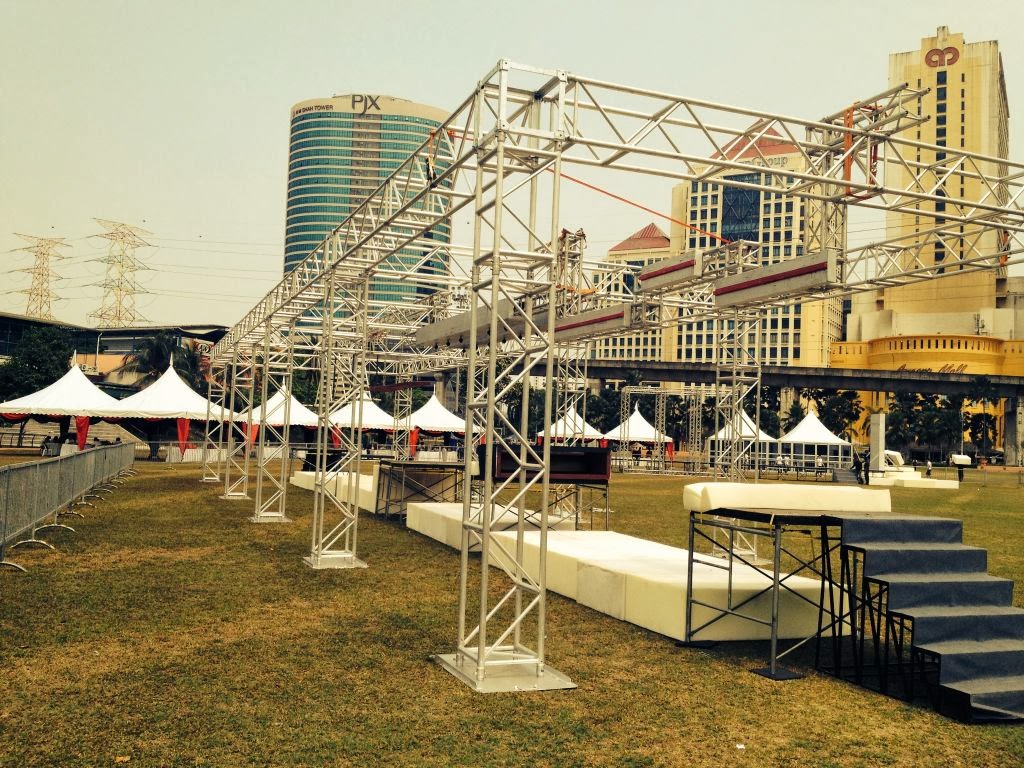 Overall I'm really happy with the course. Given the physical capabilities of walk-ons and vets being diverse, it does warrant the entry of earlier version obstacles. I like the mix of old and new with the oddball Gallon Throw being there to literally throw things off. LOL I'm actually laughing about it. It makes me very happy to see sprinkles of other shows mixed in. 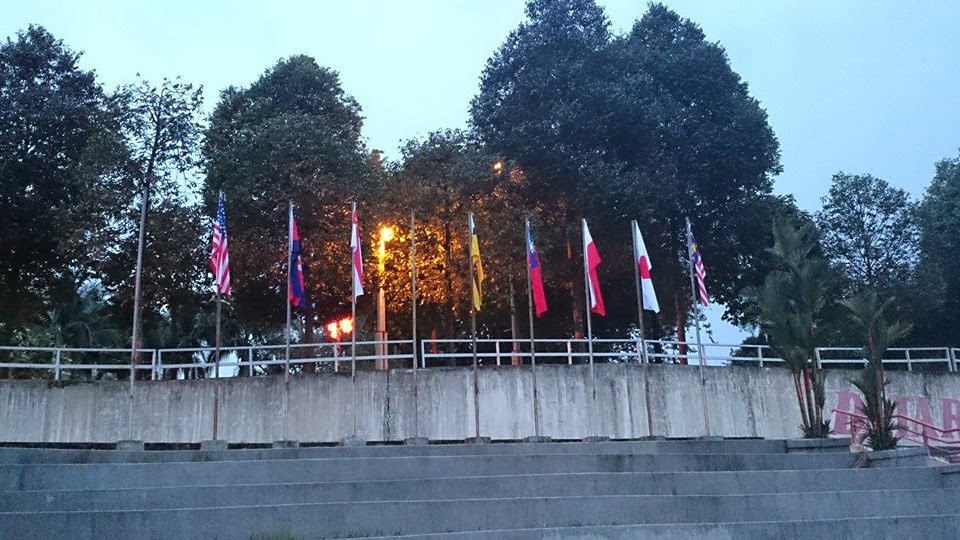 Representative flags of those countries competing in the inaugural event!
Overall this is a good first step and I wish them a smooth tournament.  Good luck to everyone and hope everyone has a great time!  Let's hope TBS decides to put some of this on Youtube since it's pretty obvious now that this will not be televised in full. 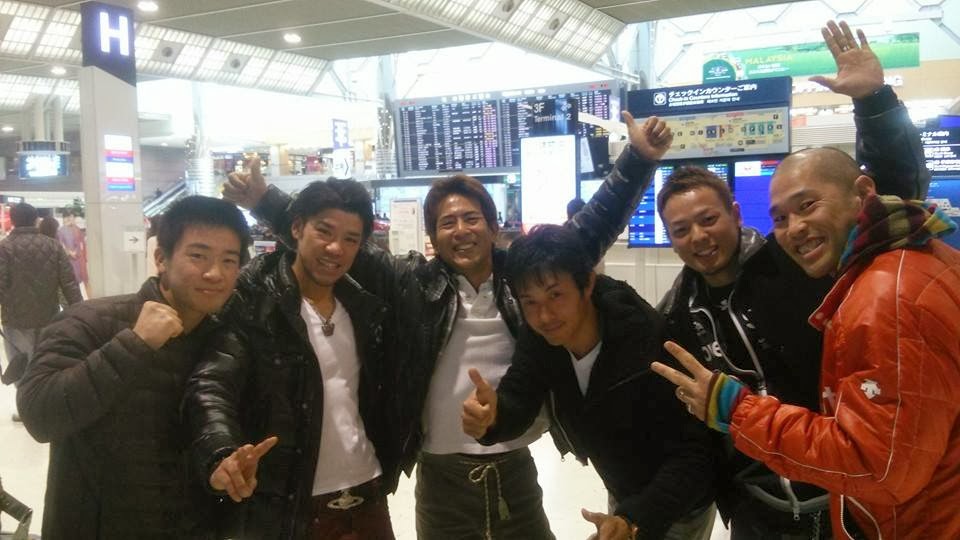 Looks good for the first event. They've mentioned before that they're open to changing the format and course each year so hopefully we get a bigger course next year. With only 2 obstacles in 2 of the stages. I can't imagine they will have a very diverse range of times through them. Thanks for the Blog Arsenette. Exactly what I wanted to wake up to!

Tehehehe comment moderation :) Thanks for the kind words though. We'll see how this changes over the years. For now I'm happy with what is already presented.

Dude! I wanna try that!! Also glad that David is competing!!

No worries Vincent! I'll clean it up for ya :) I appreciate you taking the time to even post a comment so that makes me happy :)

Hey Band! I'm glad as well. I'm very happy that they flew all the way over to support the event.

Do you think it will change country each year ? What a great start

I do believe that is their hope!