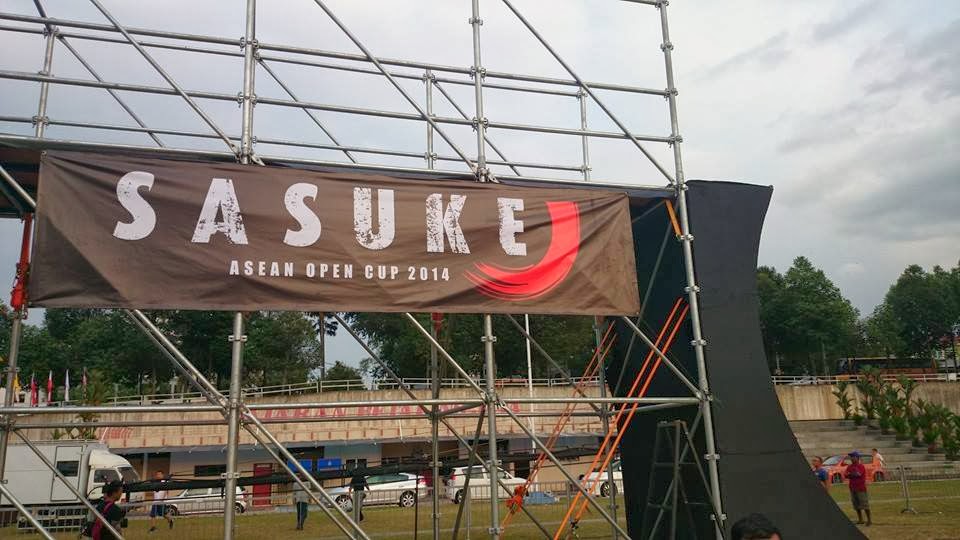 Banner is up! ©Sasuke Malaysia


Day 2 of Qualifying continues in Malaysia for the inaugural Sasuke ASEAN Open Cup! (Day 1 - which was Malaysia qualifying) was yesterday) Today was Open qualifying for all non-seeded countries.  That included everyone willing to fly to Malaysia to participate in this event!  Several countries were present to qualify for the main draw which is to be held in a few short hours! 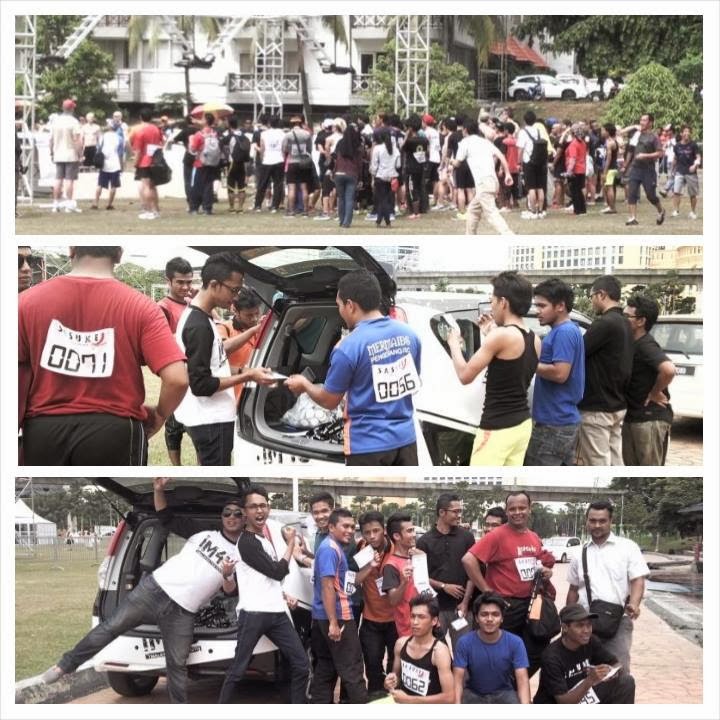 Busy day in Malaysia as everyone crowds for their chance at qualifying! ©1Malaysia For Youth


For today though it was a busy (and very hot) day for the 2nd round of qualifying.  The same set up of the Steps to sprint and top 100 times were to advance to tomorrow's main event.  Thanks to the generosity of the organizing crew people were allowed to share photos and videos of absolutely everything!  I was able to have my pick of multiple photos and whatnot to share! 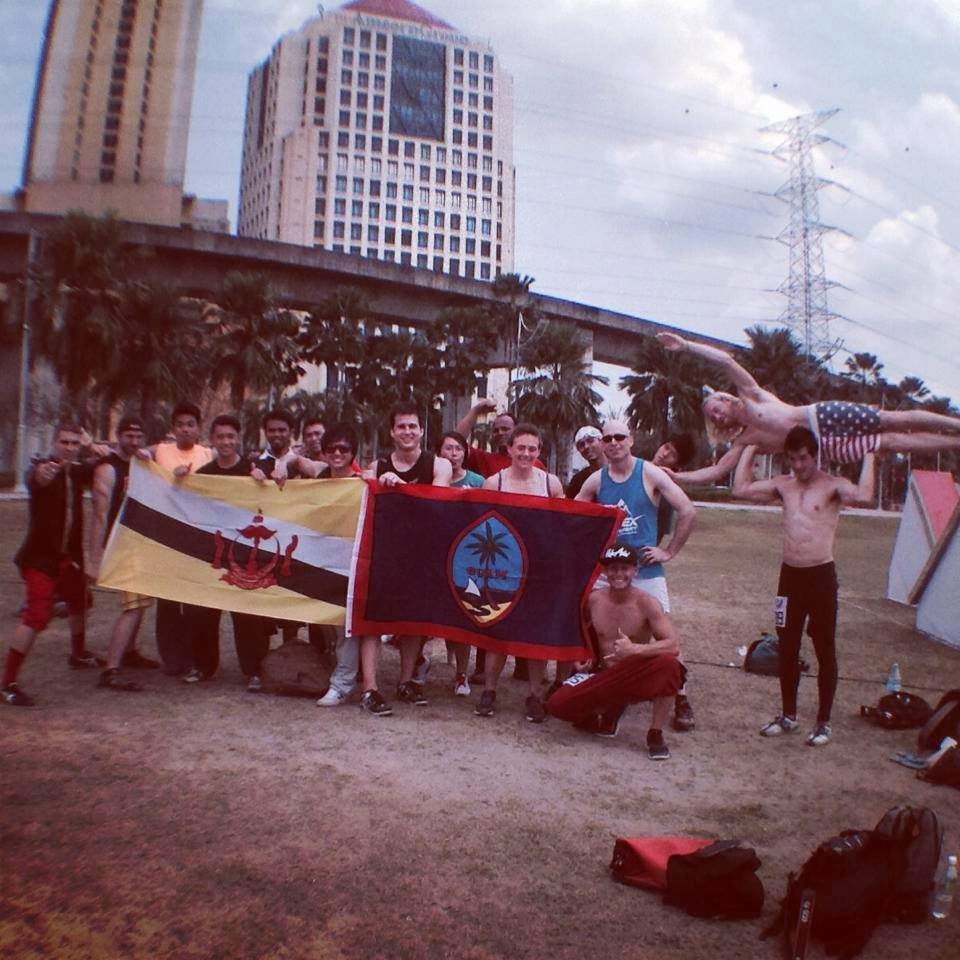 Competitors posing with the Brunei and Guam Flags ©Sasuke Malaysia

A lot busier day today as there were more than 100+ competitors from several different countries from around the world taking part in qualifying.  Country flags (including Sasuke Veteran Brett Sims ブレッド・スイムス famous America shorts LOL) were everywhere. 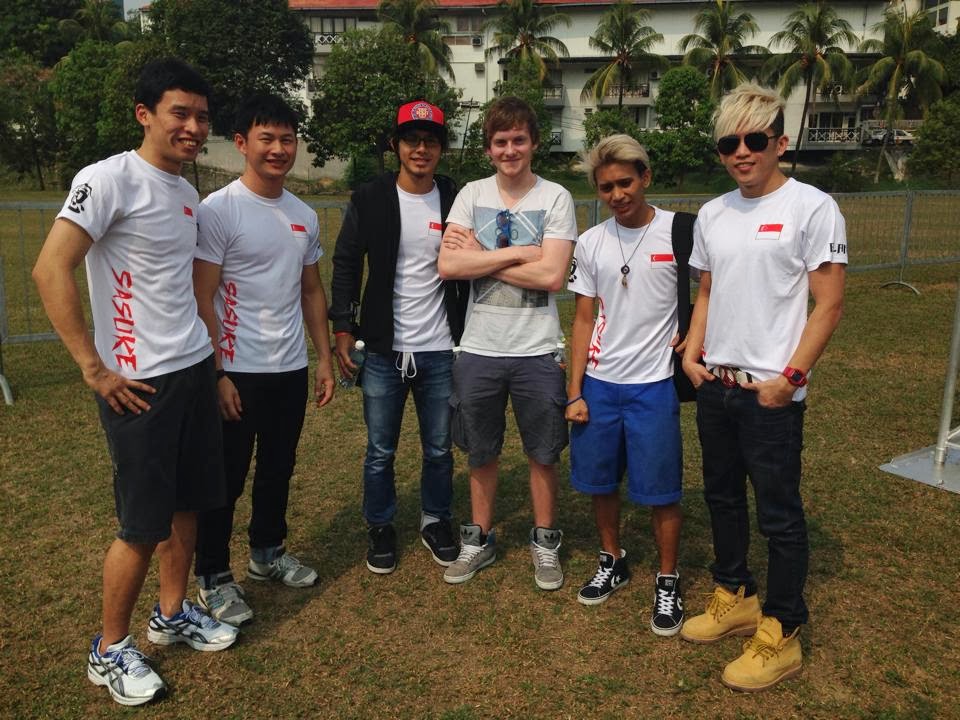 It was nice seeing so many photos from the event.  Again it was a small qualifier today with just the steps and the sprint.  Out today were more country built teams in hopes of qualifying for Sunday's Final. 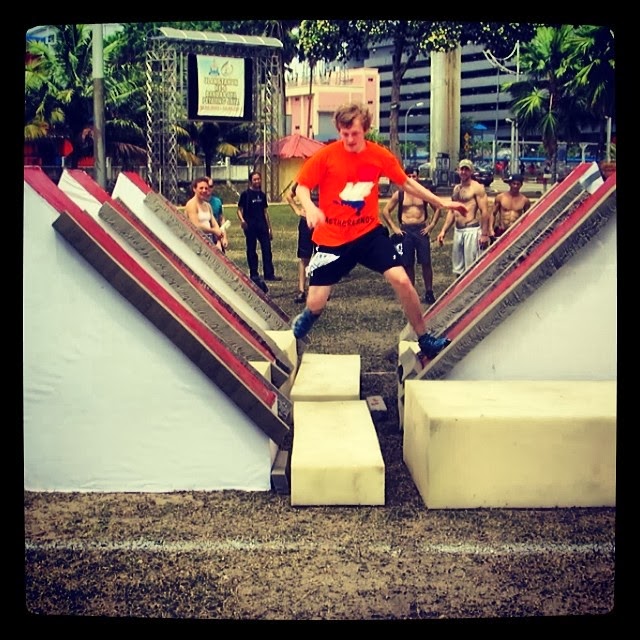 Some foreigners like Perry were single representatives for their nation.  The hope of the organizers are to make this a bigger event. It's these small steps that build on something larger. After all we all remember how small Sasuke 1 was. 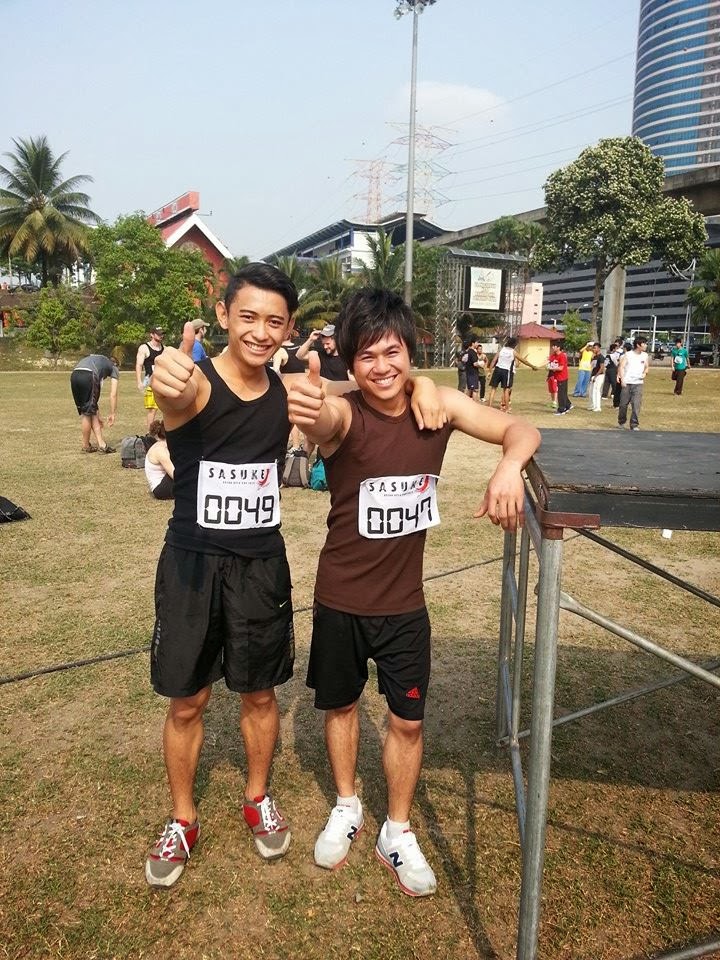 So I see these guys as pioneers.  Willing to sit through 100 degree heat to participate in a small event in hopes to help it grow into another titan event like Sasuke Japan.  The potential is much larger with the ASEAN event simply because it's an open event. 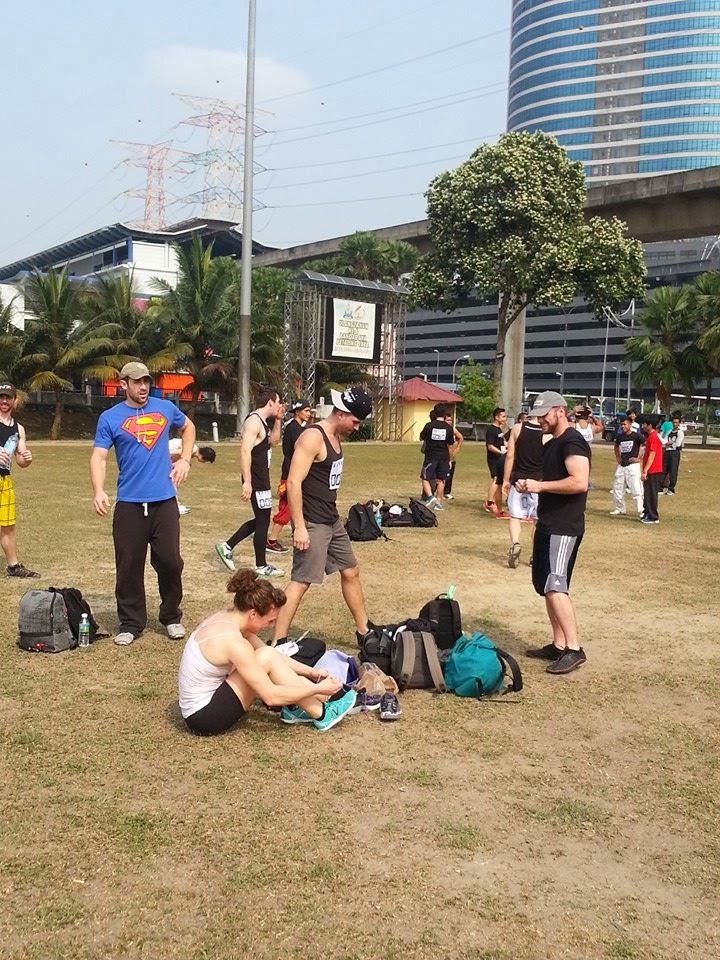 Preparations made for Qualifying Day 2 ©SAOC

It's nice to see people from the USA all the way over there.  The flight alone takes 24+ hours! 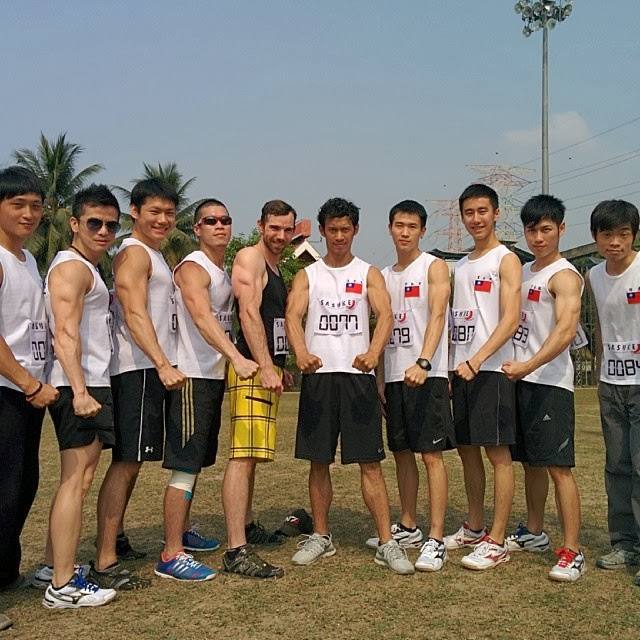 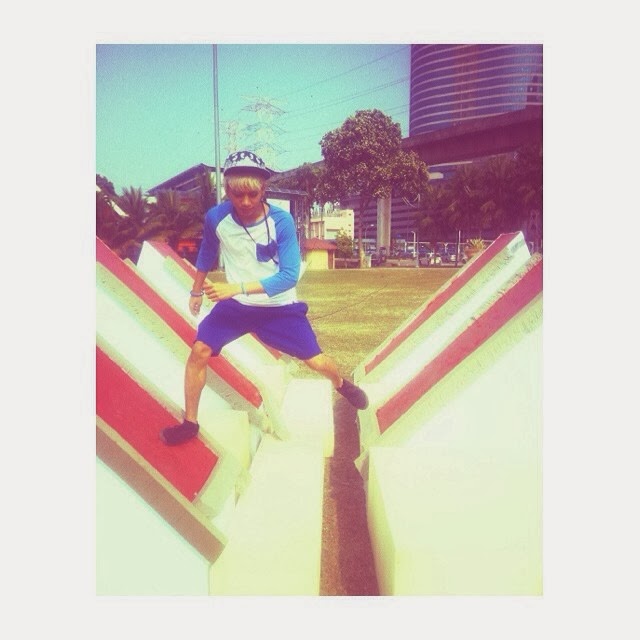 Sasuke Malaysia and Sasuke Asean Open Cup Facebooks had a myriad of photos and video.  They even had some of the qualifying runs posted.  This was David Campbell's run. 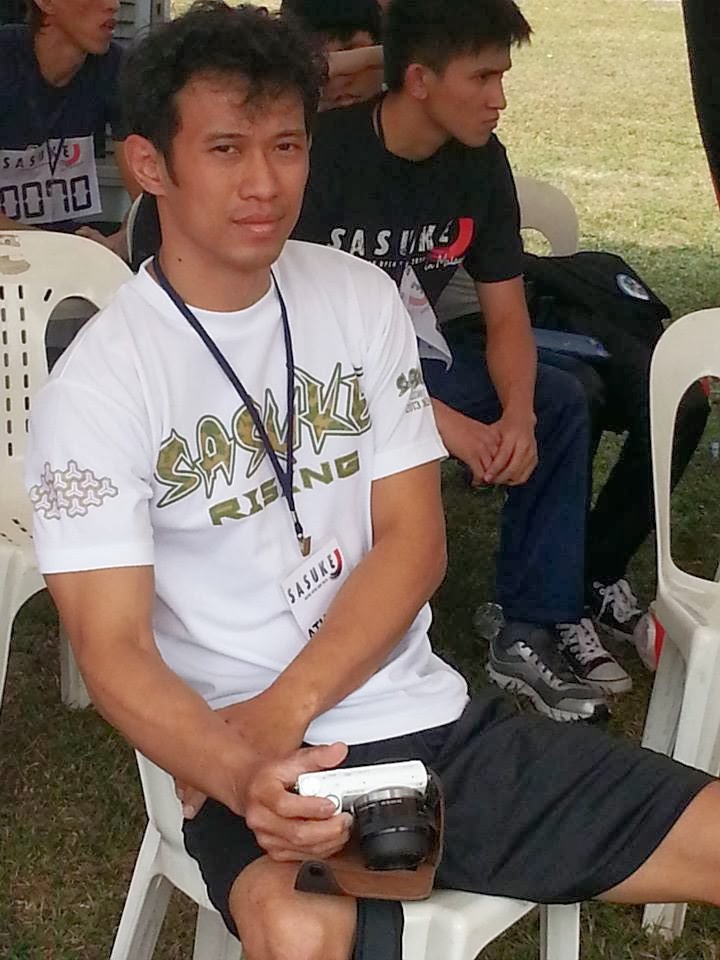 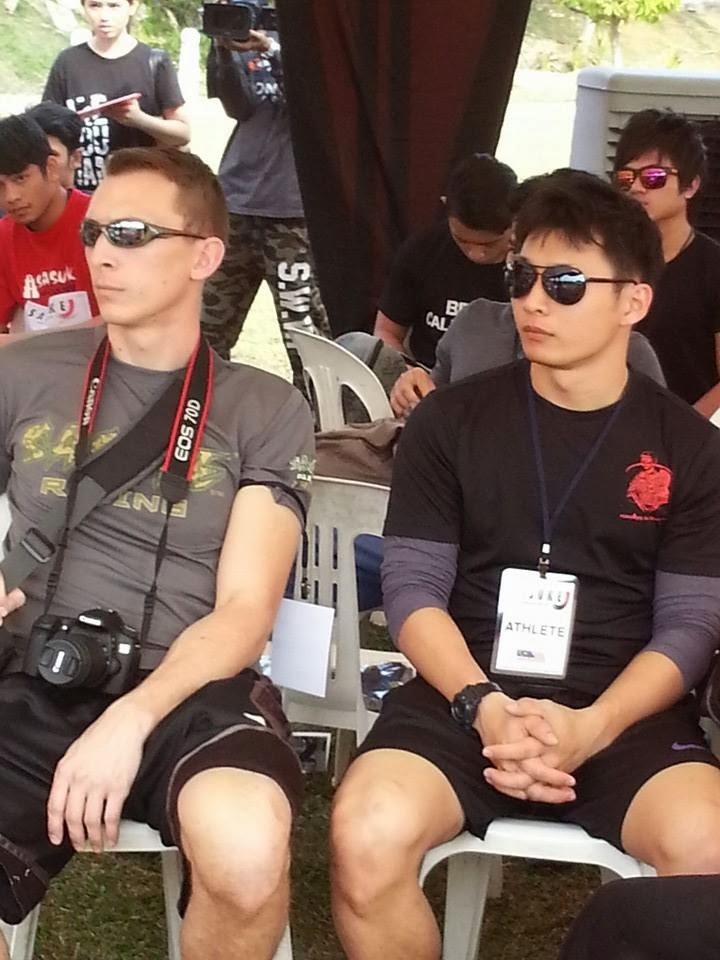 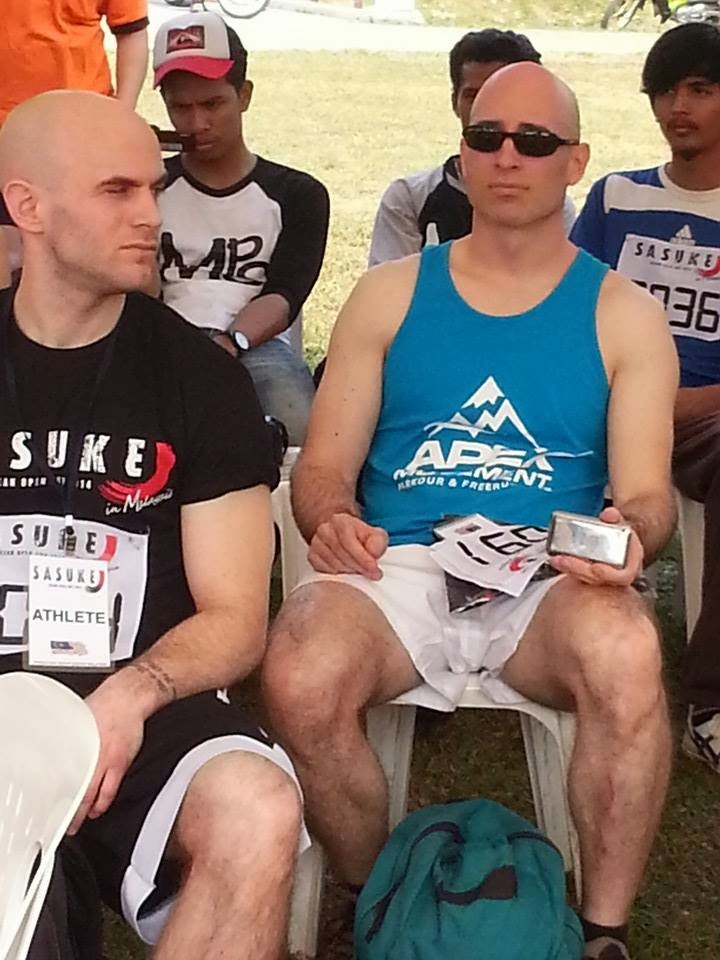 The competitors eagerly awaited their times to see if they moved on to the main event tomorrow.  The top 100 (in random order) was then posted for everyone.  Here is the list:


We would like to thank everyone for participating in our preliminaries. Below are the list of 100 participants who qualified for the finals which will be held on the 22nd of February 2014. For those who did not make it, please do not give up and visit our Facebook page and website to get updates on our future events. 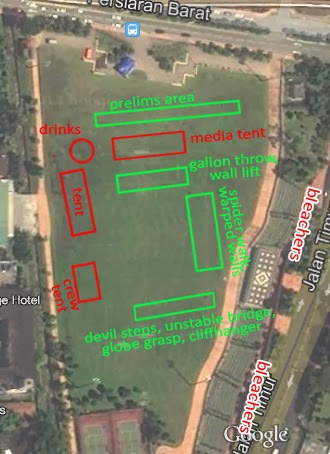 Speaking of main event here is a beautiful 360 view of the entire course that Perry Ooosterlee posted for us.  Also new SMF member azhan01 posted a friggin' awesome layout of the entire course over a Google map.  Thanks so much!  That's totally something I adore and appreciate. 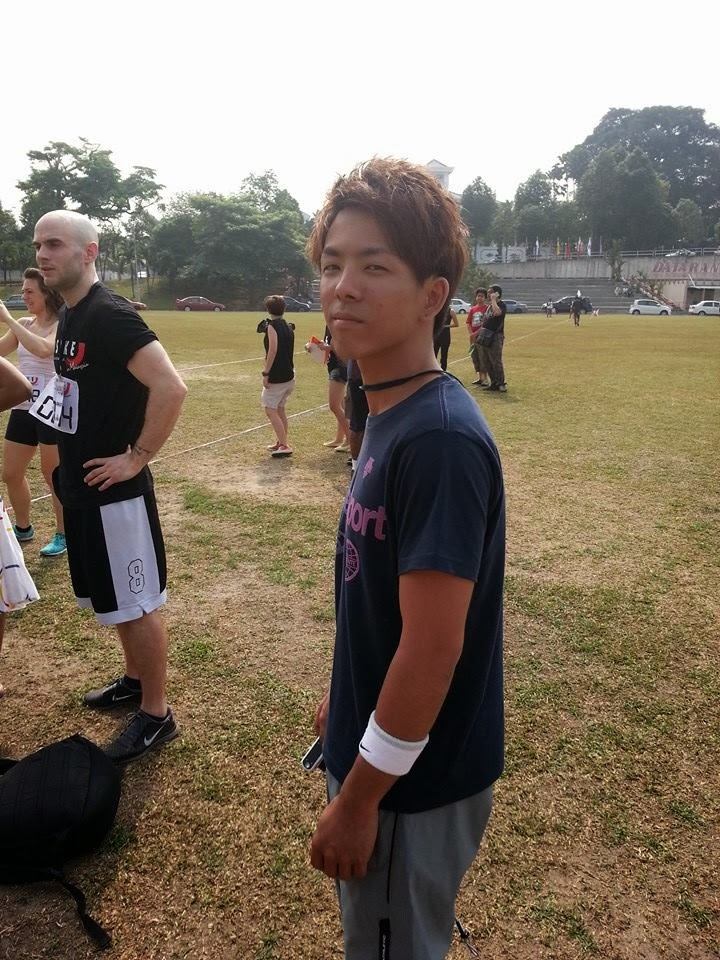 Many people know by now that Ryo was flown to Malaysia to be a tester.  I'm happy he's recovering from a very serious health problem that required surgery and had him hospitalized for 3 weeks.  I'm delighted that not only was he there, but well enough to do strenuous exercise. 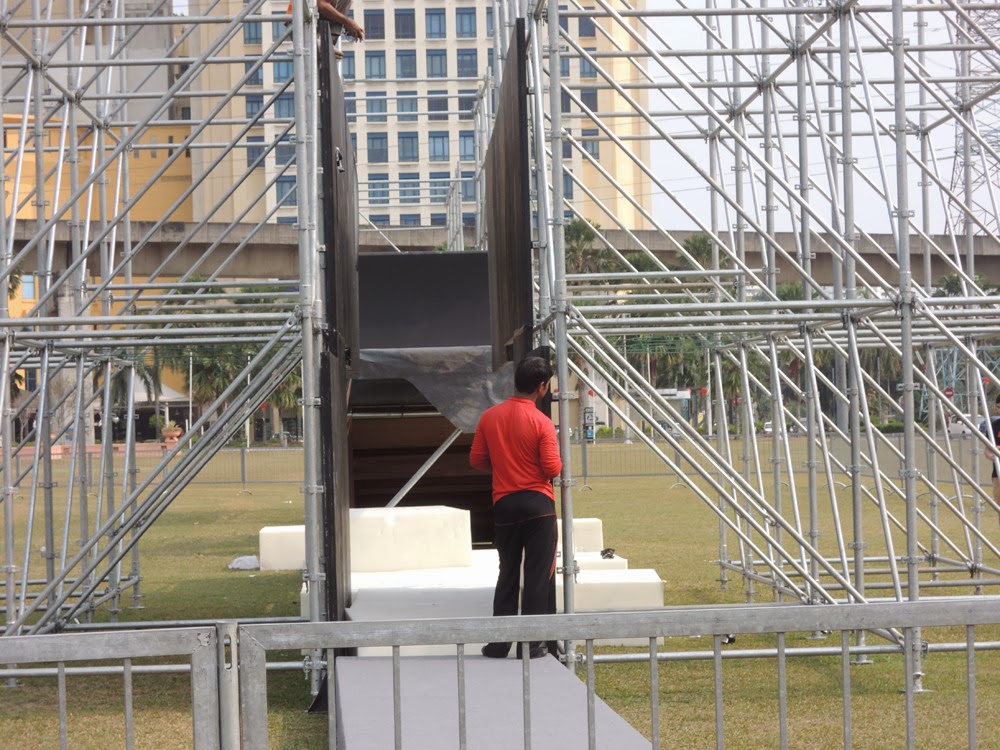 
Here's also some more photos of the course that will be run tomorrow. I posted these photos along with Ryo's photo, because he was videotaped testing out these obstacles as a demonstration to all of the competitors who came out today for the qualifying. 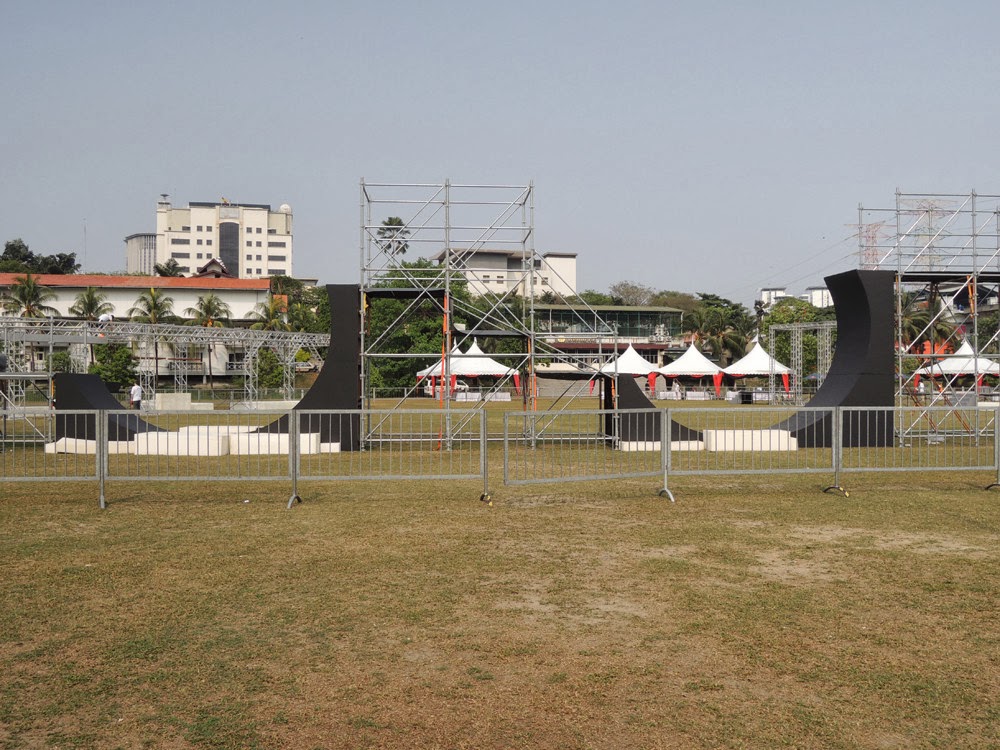 
Thanks to Team Singapore, Ryo's Stage 1 demonstration of the above 2 obstacles is HERE. Remember that this will be going on at the same time as the other 3 groups as they rotate around each stage. 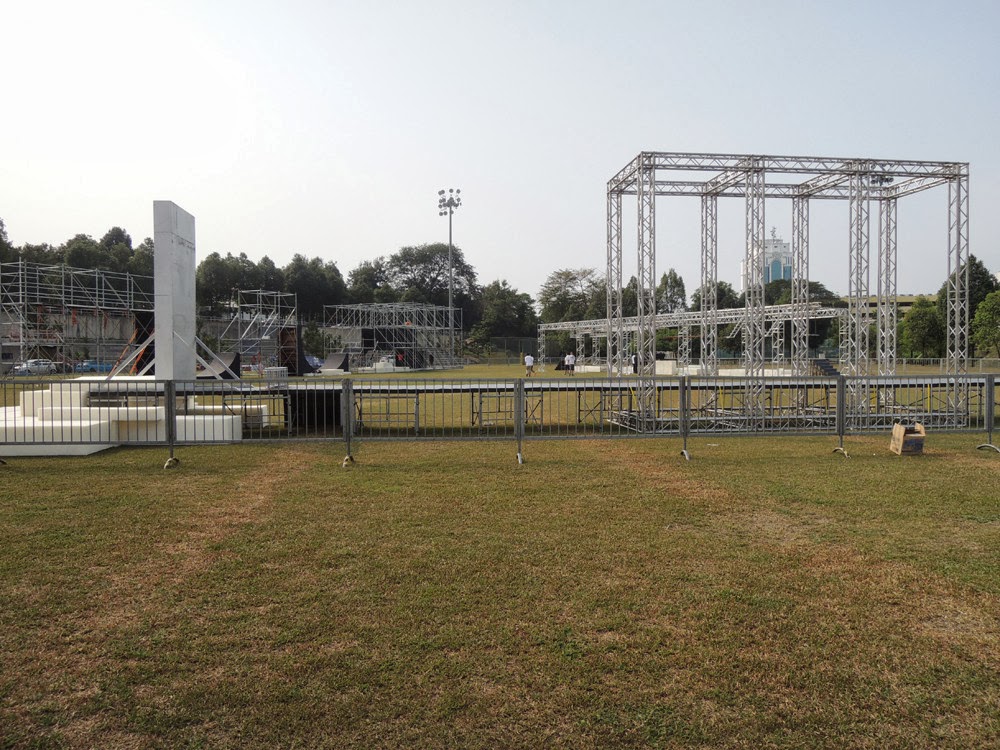 
I incorrectly said the walls were first but clearly from the video the Gallow Throw is first then the run to the 4 walls. Poor Ryo looked exhausted after that last wall.  He is not known for actually lifting them over his head so kudos for him! 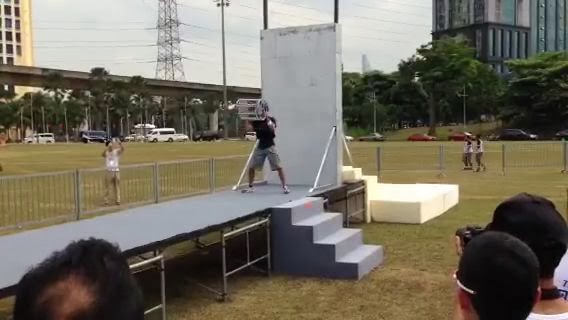 K so they have basically an open barrel (as opposed to the much heavier one from Sportsman #1 which had to be heavier to go a further distance) you throw above your head and behind you to clear the concrete wall. 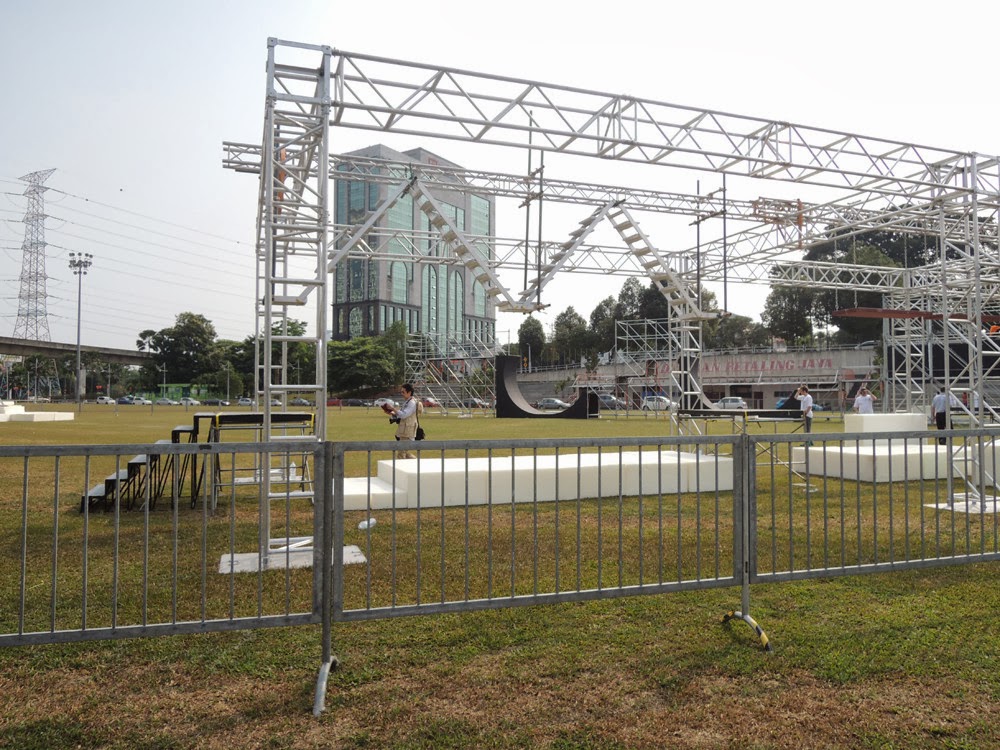 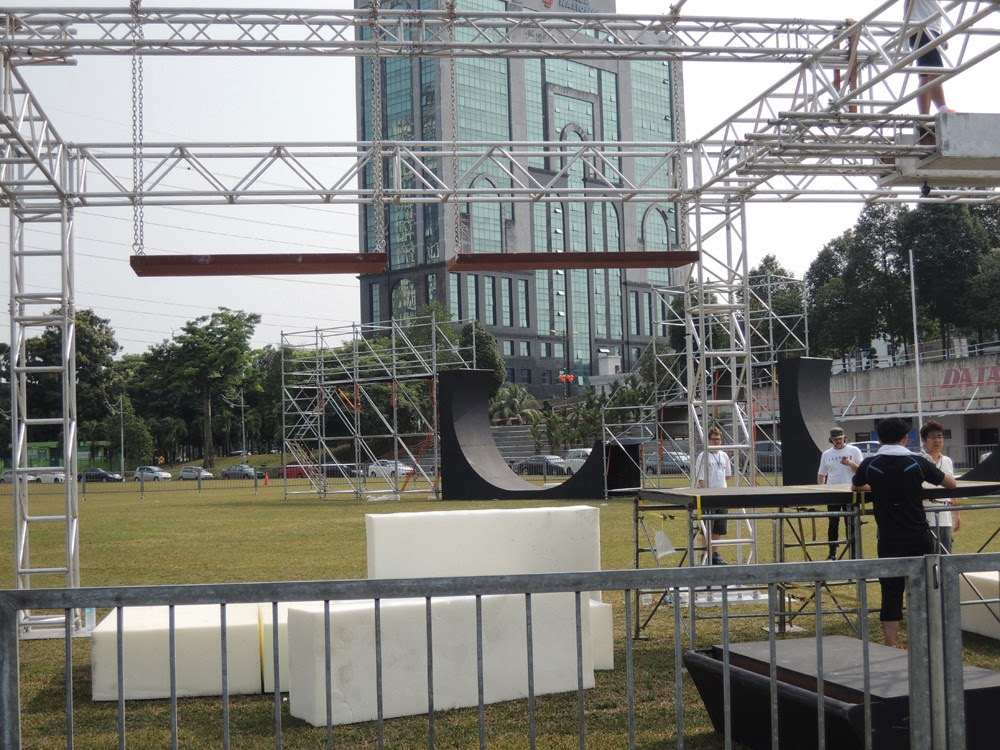 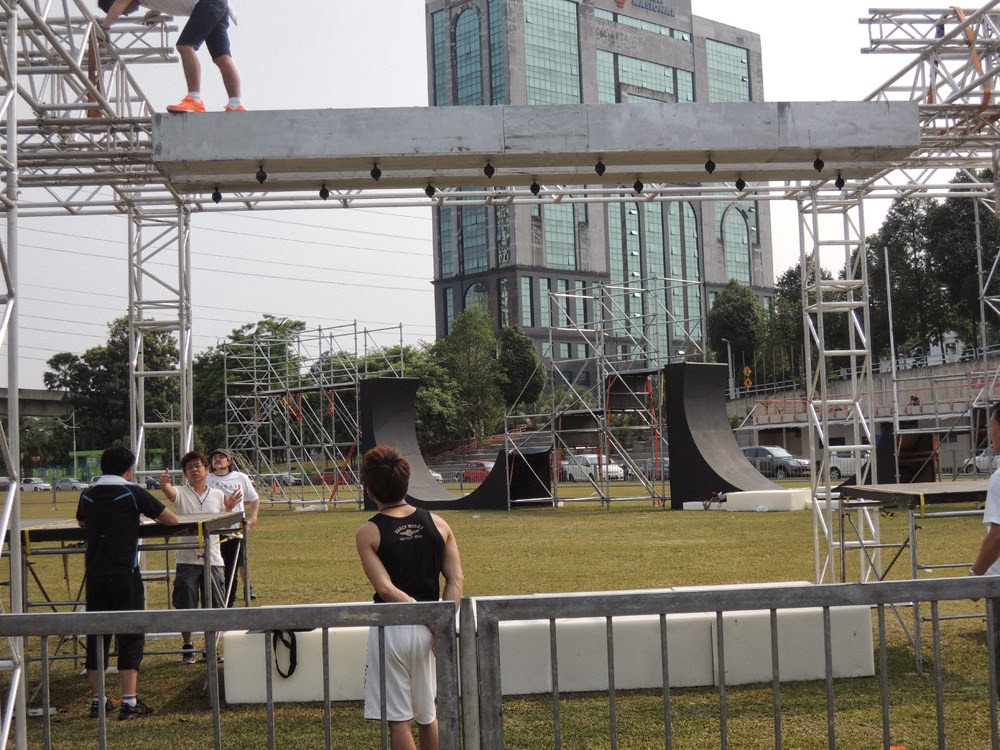 Ryo and Inui checking out the Lamp Grasper (ランプグラスパー)

Ryo also did the next stage with the four obstacles. (Video)  I had to laugh when he asked for a booster seat. Given the pace of this stage on the video, I'm curious if this too is timed.  We'll find out more tomorrow. 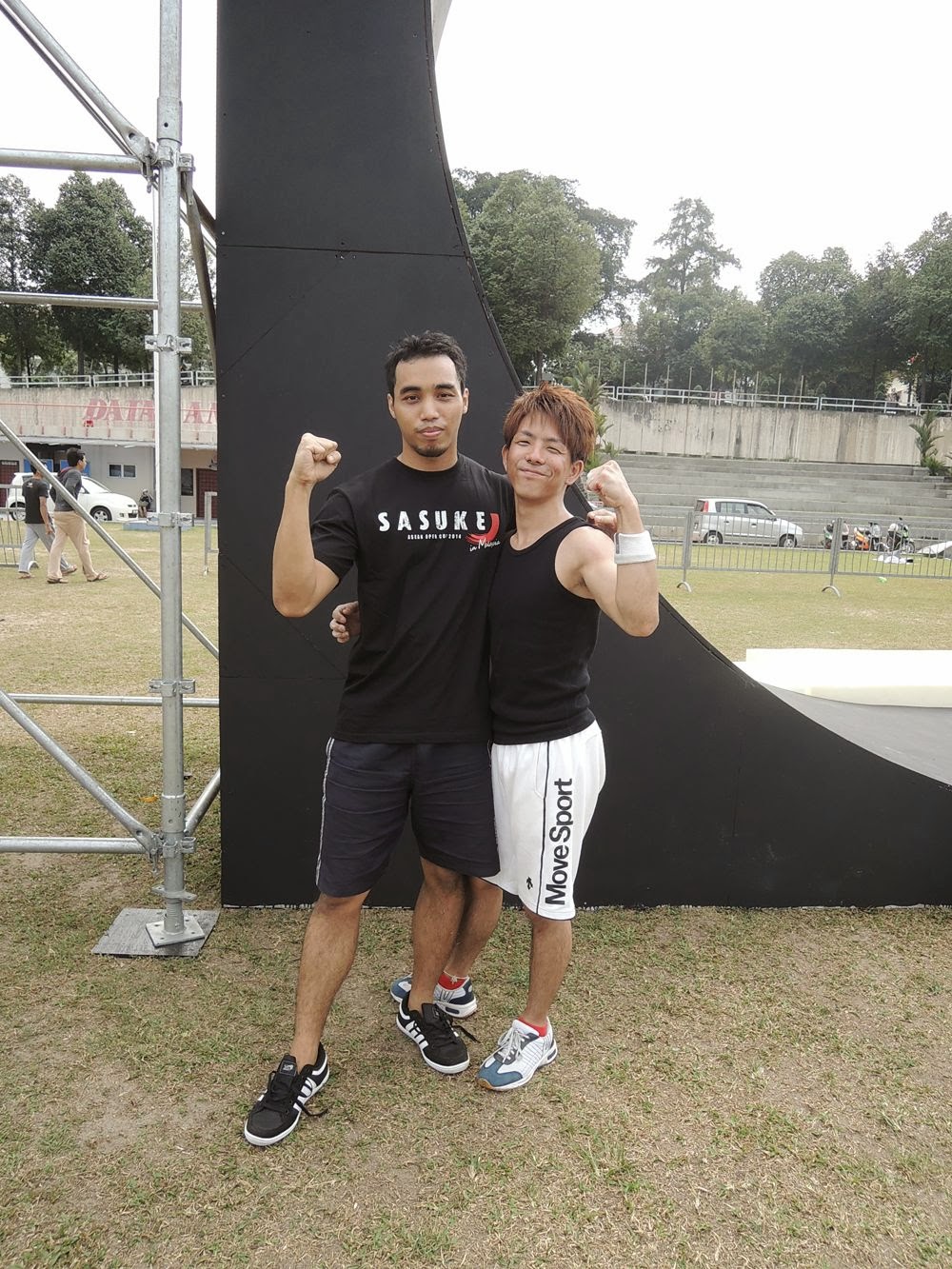 
Thanks to Azhan for the photos!  Again I'm very happy how open this event is with people able to walk up and take photos and share them freely with everyone. It is nice to see that! I hope it continues! 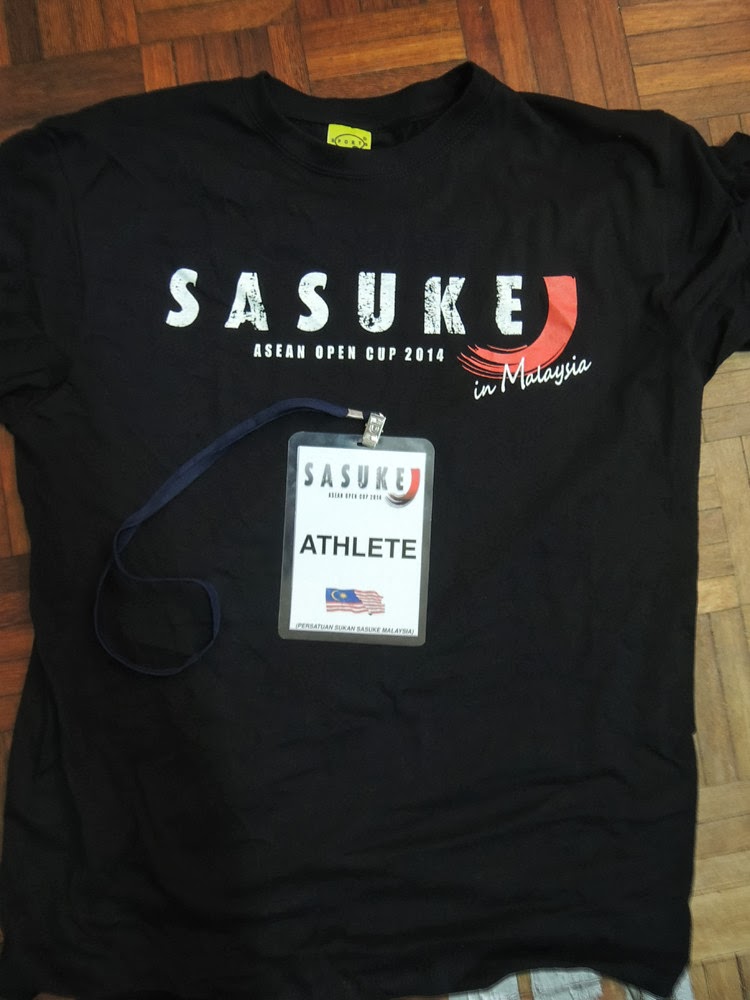 
I soooooo want this shirt.. that is all. 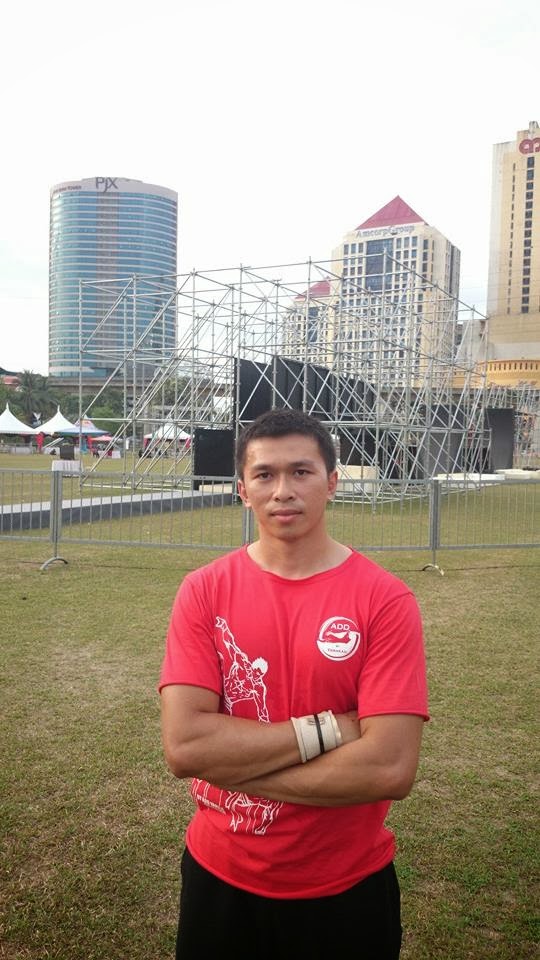 So I'm excited to see what tomorrow brings!  I'm proud of the team for finally getting this event underway after all the problems and delays over the past 14 months. 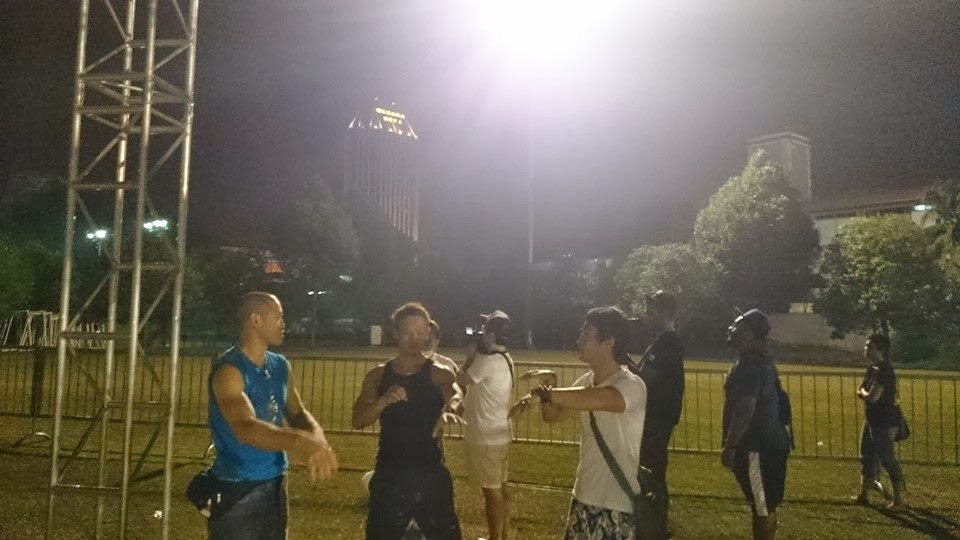 Late Friday night in Malaysia team Japan landed!  They were on the course at night to see what it looks like. This was their first view of the course. 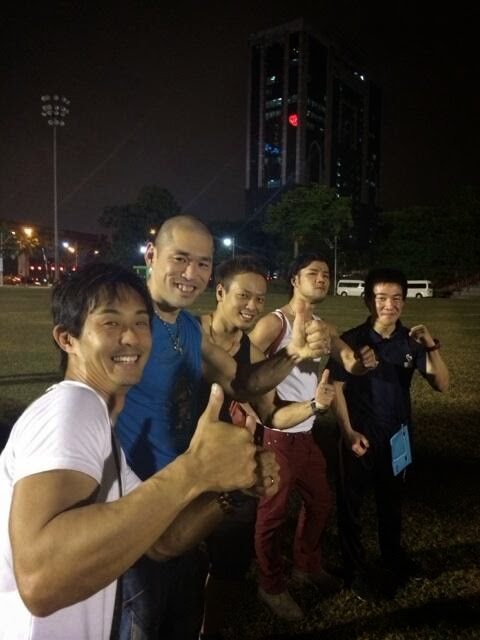 The main event has now officially begun!  Day 3 (Saturday) is the Individual Finals and Day 4 (Sunday) is the Team Finals!
Posted by Arsenette at 6:00 PM

Well, Azhan is my real name, so you can just call me that. As posted on SMF, I couldn't take pictures because I lost my camera battery during the event. I've written a short report on the event though

Awesome thanks I'll update that as well :)

1 more thing. those shirts are on sale for RM30 (roughly $10). Perhaps you could ask someone to buy for you?

THANKS FOR THE BLOG YOU MUST BE FINDING IT HARD TO PICK AND CHOOSE WHAT TO USE.

SLIGHTLY CONFUSED BY THE TEAM ASPECT

I ALSO WANT ONE OF THOSE SHIRTS

DO YOU THINK NAGANO WILL GET A CRACK AT THE COURSE

I love Sasuke (Ninja Warrior), and I'm so glad Ryo could make it and demonstrate for everyone. And team Japan is awesome. Love them. What network will this be on? Thanks.

Oh Azhan I didn't think of that. LOL Oh well I didn't organize that and now it's too late.

Hey Ad UK! Yeah because the organizers were so wiling to allow photos and videos it really made for an awesome sharing event. So yeah I had a hard time picking between them so I went for quality + most inclusive photos. Depending on what I was writing on.

No idea if Nagano ran the course or not. I'll ask!

Hello Taylor! (Comment moderation) :)
No idea if this will be televised.. I don't think this was in their budget, that said many have been asking and I hope something s at least put on Youtube.

Thank you. I hope we can see it somewhere. And I want that T-Shirt.

btw I'll clean up the other ones for ya Taylor.

Oh man, I'd totally love a shirt as well. Maybe some merchandising will come of all this.