It's been a bit since my last post so I'll update you on what we know so far with everything tied to Sasuke and it's competitors. Fair warning this particular post may be a bit long but hopefully addresses some of the questions I've been getting lately. The biggest news of note is Sasuke Singapore (entry deadline May 1). While I'm obviously thrilled to know about a new country taking part in Trials it's even bigger news given the state of Sasuke as we know now. Reading the application and even the short announcement on the page.. it specifically has a line that made me leap out of my chair.

The winner of SASUKE SINGAPORE will get to go to Japan to compete for ultimate victory on the Japanese course.
OMG OMG OMG.. Sasuke 28... Given the lack of news and at least glimmer of hope that Sasuke was still there but in hiatus.. this news made me very happy. That only confirms the original rumors that the company was reforming to continue Sasuke alone. Again.. still rumor on that part but the fact that the official announcement for Sasuke Singapore states JAPAN as the ultimate destination for their winner.. is.. AAAAAWESOME..... You know for a fact that if/when there is more news concerning Sasuke 28 you bet I'll post about it. In the meantime this is a wonderful glimmer of hope!

So nice that they are going to show this on television. Color me disappointed that after all that.. Malaysia never aired the first year of Sasuke Malaysia. You'd think with all the press that was there we would have seen something by now. This announcement of airdates already set by the TV station is great news already for Singapore.

Staying in the region (since Singapore is Malaysia's neighbor), Sasuke Malaysia is almost set for their 2nd Season! As it was with Season 1 last year, the competition is tied to a large one run by the Malaysian Government. It's called Hari Belia (which I'm told means "Teenager" or "Youth" Day) and this year it takes place the week of May 23 - May 27, 2012 in Putrajaya in Malaysia. The event is dubbed the 1 million youth gathering. The dates for Sasuke Malaysia specifically are May 25-May 27 (the weekend of the Hari Belia weeklong event.) All information including an application (Deadline May 4) can be found on their page for Sasuke Malaysia.

Now, Finals. The ANW4 Finals comprising of the 90 competitors that survived Regionals (and 10 wildcards) will be competing on a 4 stage course will occur on the weekend of April 21-22, 2012 in Las Vegas, Nevada. The ANW4 Final itself will be a Sasuke-grade 4 stage course created by TBS the broadcasting company of Sasuke for the past 14 years. (There is a rumor that has been floating around that the course was going to be designed after the Sasuke 27 course in Japan from last July) Winner of the Vegas event will gain the ANW title and a cash prize of $500,000 US. I presume that unlike Wipeout they would have to complete all 4 stages (just like Sasuke). I am however disappointed that the Final will not be filmed in one go.. there seems to be a time gap between stages.... Also, I'm still disappointed though that unlike Sasuke.. the Japanese stars will not be invited to their course.. even as guests. /sigh

Complete airdate schedule for both G4 and NBC's airing of ANW4 is as follows: 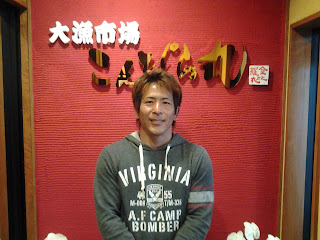 All-Star Makoto Nagano 長野誠 - April 6, 2012 ©Konpiramaru Restaurant
And because you all know I can't write a post without updating you on how he's doing.. LOL here we go! First and foremost this is a ridiculously busy time for both Makoto Nagano and his employer Takasui Corp. Over the past couple of months he has been busy with certifications (and in some instances re-certifications) for a brand new ship that will be given to him sometime in May, 2012. 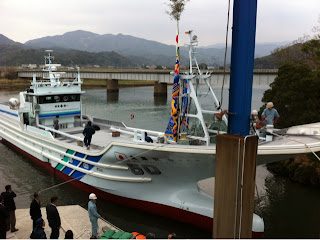 First picture of the brand new "50th" Konpiramaru - Makoto Nagano's new ship (to be officially launched in May, 2012) - ©Captain Taizo

This is it. This is the brand new 50th Konpiramaru. This is the new ship Makoto Nagano will be a Captain of! What I learned was that the 28th belonged to a previous Captain (and he assumed it after him) but this one is made specifically for Nagano. I'm so happy for him! Seems the ship is in the final stages of preparation before it is part of the main fleet in May, 2012. Congratulations Captain Nagano! 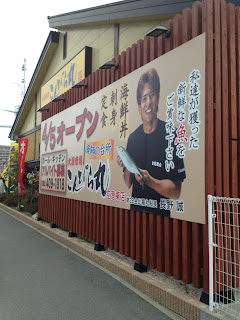 Konpiramaru Restaurant Poster in Fukuoka ©mukaimary
The other reason why he's been ridiculously busy is that Takasui Corp is expanding their restaurant locations throughout Island of Kyushu. This poster is in Fukuoka. One of the 4 other restaurants that are opening within the next month! The other locations as posted by Konpiramaru's website are Yatsushiro in Kumamoto Prefecture and Hayato in Kagoshima Prefecture. This of course is complimenting the flagship restaurant also in Kagoshima Prefecture that Nagano did a commercial for a couple years ago. 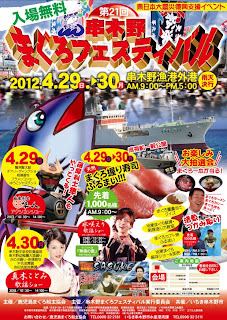 The 21st Annual Maguro Festival 第21回串木野まぐろフェスティバル will take place the end of this month in Kagoshima Prefecture on Sunday April 29 and Monday April 30, 2012 in the city of Ichiki-Kushikino. This of course happens during Golden Week in Japan. This is a local Tuna event for the port city of Kushikino. It's pretty much a county fair including games for kids, music, food and other activities for the whole family. The past few years the company Nagano works for, Takasui Corp. has participated in the event (since they also use this fishing port) and they have Nagano design and build a Sasuke set where he could demonstrate his skills along with a few of his friends to the local crowd. More information can be found at the city website.
Posted by Arsenette at 7:51 PM

Thanks for all the comprehensive information!! You're amazing for collecting all those photos and updates!

Now that he has a new boat, he has to make a new video of him doing a handstand on the top of it.

LOL MoCP you are right.. send him a message on it.. LOL

So good to have news and to be reading here again :D Thanks for this.
LMAO I second the motion about the handstand - even more if he does it during the ship inauguration (or however they call it) ceremony.
And now for the bomb...
"The winner of SASUKE SINGAPORE will get to go to Japan to compete for ultimate victory on the Japanese course."
...BOOM!!!!! Lucky my roommates weren't here when I read this otherwise I'd have scared them - and there wouldn't have been enough place for both them and me in hurray-jumping-around mode (this room is SMALL).
Ok ok...still not official but...it's great to have hope at least :)

Here's hoping for Sasuke 28! I found this by accident..searching for info on whether or not there would be a 28.
My 8 year old grand daughter and myself are totally addicted to Ninja Warrior. We watch all the reruns and still love them.
I am not sure about AJW. So far I have not been impressed by them and they totally bored my grand daughter.
Hmm..who knows..maybe.
Thanks for all the info.