ANW4 Details as I know it

Since my last post on ANW4 I've had a series of questions I wanted answered. Given how poorly the event was run the past few years (and specifically last year) it was good to know that a whole new team was assembled to work out the problems that arose over the few years in organizing ANW. Given also that the format has vastly changed (and improved IMO) from the previous years, more care is being taken to make sure this one doesn't suffer the same fate as the previous ANW's. Thanks to ANW4Casting, who have been awesome in answering questions.. all kinds of questions.. and often!.. I decided to send an email to them with my list of questions.. You know me.. I tend to be er.. thorough. yeah.. thorough :) After a bit of phone tag, I was able to spend some time on the phone getting my wall of text .. er.. questions answered :)

My concerns were logistical questions so keep in mind all of this is still pretty fluid and being worked out as I write this. In fact the person whom I spoke with was going into yet another casting meeting after our conversation so please bear in mind that all of the dates with one exception are floating dates and are not 100% confirmed. I'll explain on each.

The slots are filling up fast (in fact most likely faster than in any other year honestly) so don't wait to get your application in. They are NOT taking Youtube submissions and unfortunately are not relenting on their over 21 years old clause this year. Given the following information, it is a forgone conclusion that they will NOT extend the deadlines as they have been in previous years, in fact it is entirely possible they will fill up all slots available before those deadlines so don't wait until the last second! Projected spots for walkons are.. literally in the single digits and if they fill up they will only have 1 walkon.. period.. so don't delay! 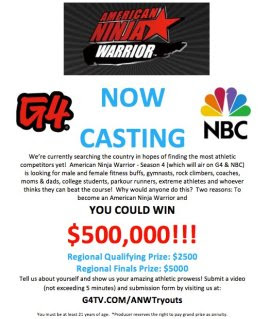 Regionals: Each city will encase 2 separate regional competitions. Each region will run on it's own day. Approximately 125 people will be running for each region for a total of 250 people in each city. So for example day 1 of the event will be say.. Northeast region (about 125 people) run the course that one day. The next day would be Southeast Region (also about 125 people). Winners of each individual region will earn a $2,500 cash prize.

Regional Finals: On the following day the top people of each region (top times I'm told) will go head to head for the $5,000 cash prize for that city (in this case Miami, Florida) for what it's being called Regional Finals. From these Regional Finals will the 100 competitors be chosen for the final in Las Vegas, Nevada in April. It is unknown at this point exactly how many from each region will be chosen for each segment. Casting does exactly that.. cast.. NBC will be doing the logistics including rules and organization of the actual event. This is different from previous years I'm told as NBC is doing everything (organization-wise) and not G4. It is also unclear if Regional finals will be re-running the same course twice or an amended course (like ANW 2-3's Semi finals from the past) where the first stage is tweaked and extended. Honestly, I forgot to ask.. Given previous ANW prelims this is only an educated guess. I do know that fastest times will determine the Finalist in Regionals and Regional Finals. 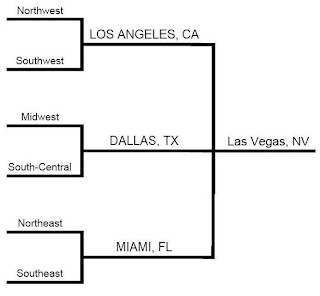 Dates: Note: These are floating dates, time-frames, etc. These are the proposed dates they are working around with a minimum of 3 days at least for each city so bear that in mind. They are also working hard at getting weekend dates wherever possible but as of now these are the time-frames for each of the city prelims.

Again, I can't stress enough. These are the timeframes in which they will be hosting these events. The minimum timeframe is 3 days in each city (hosting 2 regionals and a regional final) and it is unclear which region will compete first and on what day within each city. So when you get your Application approved and invite to your prelim competition you will be told at that time when you will be competing. This is just to help you with at least giving you the proposed timeframes to make your decision on whether or not to even apply (or for those watching to attend as a spectator). I would suspect that exact dates and times will be given closer to the deadlines as by that point the organizational stuff will be completed. Given that they have to set 4 locations, with different people in each all in a month or so.. I don't envy their task...

Now, Finals. The ANW4 Finals comprising of the 100 competitors that survived Regionals will be competing on a 4 stage course (with the help of TBS whom also did Sasuke Malaysia and upcoming Sasuke Malaysia 2 (May, 2012)) will occur on the weekend of April 21-22, 2012 in Las Vegas, Nevada. The ANW4 Final itself will be a Sasuke-grade 4 stage course created by TBS the broadcasting company of Sasuke for the past 14 years. Winner of that event will gain the ANW title and a cash prize of $500,000 US. I presume that unlike Wipeout they would have to complete all 4 stages (just like Sasuke). It is unclear if top times within the Regional Finals will determine the top 100. I'm hoping not.. but that's another story and something I do not have an answer to. I'm not entirely sure anyone knows the answer to that yet honestly... NBC is handling that end of the organization nightmare so I doubt I'll ever get that answer honestly. Either way that is about the only date set in stone. Location is still being worked out so that information is not public knowledge. What I am interested in is whether or not spectators are allowed to watch the Final in Vegas and I got my answer - YES!!!!

VIDEO LINK
Spectators:
All events including Regionals, Regional Finals and the ANW4 Final in Vegas are open and free to the public. It is unclear as of yet how the public entry process will be handled (particularly the Vegas Final). Once I get information (especially if it's on a ticket basis) I'll post that information here. I've been besieged with questions as to if people can take their sons and daughters to watch this thing live (especially since Sasuke in Japan is invite only and a closed set). I'm very happy to announce that it is indeed open and free to the public but as of yet details of that organizational feat hasn't been announced. I'm not even sure they know it yet themselves as they are finalizing locations first then deal with the minutia later. Regionals most likely will be handled just like Venice Beach from ANW1-3 was handled (available open bleachers.) Again, educated guess based on past history.

Yoshiyuki Okuyama 奥山義行, Makoto Nagano 長野誠 and Current Sasuke Champion Yuuji Urushihara 漆原裕治 being interviewed during ANW2 ©Convex Photography
Sasuke Stars USA Visit blog
One final thing is that it seems more and more obvious that just like ANW3, the Japanese stars will most likely not be invited as guests to visit ANW. Seems ANW2 was the only exception to this. /sigh one can dream. Also, no word yet on the fate of Sasuke 28. If I hear anything otherwise I'll post as well.. most definitely!
Posted by Arsenette at 11:31 PM

You going to watch

Well NBC is free to air and they are not deleting 90 other competitors in another country and renaming the competition and airing the rest of the competition 7 months later.. LOL I won't be able to see the prelims simply because I don't have cable anymore but I'll watch the final ;)

Ah! .. I'd love to but there's no way I can afford to fly out to Vegas and watch it. I figure if I can't see it I can find information for those who have the means to watch it and report back to me .. thehehehehe

Good to hear that NBC's running the show. They do the Olympics broadcast in the US.

Nice. You have no idea how much better I feel about this knowing that TBS designed the 4-stage course.

I actually didn't like the NBC coverage of last year.. LOL I got so tired of listening to FIVE HUNDRED THOUSAND DOLLAR ENDORSEMENT DEAL FROM K-SWISS literally every 2 minutes.. /facepalm

And agreed Henry. That's the part I'm looking forward to the most. ;)

Hi Arsenette. I was wondering if I could ask you about the casting processes for Sasuke Qualifiers, general Sasuke, or Kunoichi. Is there a separate company besides M9/TBS that does them? Are they as unorganized as G4 casting for ANW (i.e. call you back 1 day before you're supposed to run)? Do people apply to the qualifiers via video, or is it invite-only, or what? I am just curious and you seem like the one to ask. Thanks!

No.. it's always been TBS/M9 that did the invites. G4 took over for all American invites to Sasuke (they never did Kunoichi trials.. only a straight invite when TBS asked for one and they sent a playboy playmate instead of sending Luci Romberg.. ). Malaysia got to send 1 guy last year after having a trials and Taiwan had trials years back and that's how Lee ended up in the Sasuke family. Ultimately the decider is TBS/M9 since it's their show. As for disorganized.. The Japanese are just as bad. They had trials for one of the Sasuke's 2 days before the actual Sasuke competition.. and Nagano's first invite came at Sasuke 6 with literally 4 days notice (and he had to decline because he couldn't take off work). So unfortunately this is par for the course. Television doesn't give a crap about real life commitments.. they are used to "actors" whose sole purpose in life is to whore themselves for the camera. Regular people suffer during these casting processes.

Can't wait to see how they format it on TV.

I'm not sure I'm as optimistic how they format this. Just seeing the Ninja Warrior 27 airing this past weekend, five things struck me:
1. How Shingo reminds me of a goofy brother that you love but you know will find some way to screw up what they're doing (and makes them even more endearing and frustrating).
2. How Yamada needs to train for that warped wall 365 days (if he isn't already) if he's ever going to get past the first stage (and knowing him, if he does this, they won't have any more Sasuke--I hope that doesn't happen to people like Ryo).
3. How GRACEFUL Nagano has been through the years, with his movements and in defeat. Sasuke 18 stage 1 was the best example.
4. How every time I watch Yuuji, I keep saying to myself, "How does he do this?" I have the utmost respect for this shoe salesman.
5. I cringe because I so much wanted to see the Americans woven into the context of the NJ27 broadcast. I feel "robbed" so to speak, because it takes away from the entire context. NBC: we want to see the Americans mix with the others, including cheering each other on.
I can only hope NBC and co. do better this time with the American broadcast, but I'm not holding out hope.