Nagano is in Las Vegas for ANW4 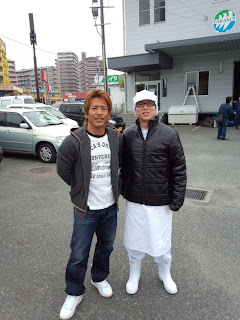 
Last night and today were interesting to say the least.  I've been following up a rumor that started  with this blog.  It showed our favorite Sasuke Fisherman (cough.. with freshly dyed hair that they must sell by the gallon.. cough) visiting one of the Takasui Corp. run restaurants (the one in Fukuoka) that I blogged about the last time.  They are getting ready for their grand opening of another Konpiramaru Restaurant and Nagano came by to pay them a visit.  What's interesting is that in the blog post he mentioned that  Nagano was just stopping by on his way before he left to the airport to fly to Las Vegas.. and so the wheels began to turn.  Spent most of last night and the morning tracking down the rumor.  He wasn't expected to go given how friggin' busy the company schedule is.. so I was surprised that he was even rumored to be going. Happy! But very surprised.. especially given that Maguro Festival is NEXT WEEK and he's part of the organizing committee for Takasui... I mean just this afternoon he was supposed to be in 2 places at once.. LOL


I sent a message to Matt Iseman who's been an awesome sport in dealing with me during these past few months leading up to the Final.  Each time I'd convey the message of the fans to please bring a Japanese competitor to ANW4 (just like they did in ANW2) even if they didn't compete at all.  It would be an awesome opportunity for fans to meet him up close and personal.  Even sent him the tweets from Yuuji mentioning that he would love to go and followed ANW's steps along the way from prelims to Regional Finals to this weekend's Finals.  So as the rumor drew stronger I sent Matt messages to look for him for me :) LOL  And then I get the tweet that made me smile all night. He was in Vegas! 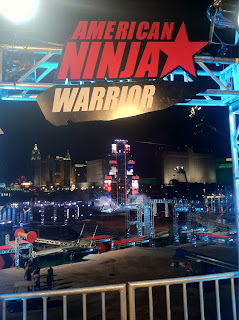 Now, I don't expect Nagano to be featured at all in the broadcast but it's nice to see him getting the opportunity that we all wanted.  To meet the fans. I wish Yuuji had the same opportunity but beggers can't be choosers.  As of last week I was sure ANW wasn't going to have a single Japanese competitor.  Now I'm happy I can say for a fact that there is one! And he is undeniably the most recognizable.  So if you are Vegas and near the ANW set.. look for him and greet him. He genuinely loves fans.  He sacrificed a lot to be here.  Especially during the anniversary of his father's death. 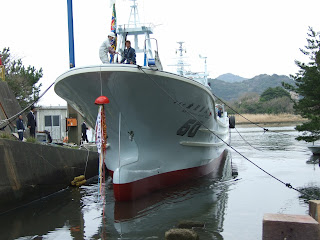 In closing I forgot to add to the previous blog another view of Nagano's brand new ship (scheduled to be completed and part of the fleet in May, 2012).  Hopefully I'll have more pics of the  All-Stars participating in the Maguro Festival which starts on the 29th of April and of course any fan pics with Nagano from ANW4!
Posted by Arsenette at 11:11 PM

Truly wonderful to see nagano hope they let him have a go on the course. Actually the course looks great got to love the rolling log one of my favs

Yay for Nagano, but Its a shame that g4/NBC hate Yuuji so much and didn't bring him with Nagano. I heard that he even expressed that his desire to go. I'm not Yuuji's greatest fan but he deserved to go just as much if niot more than Nagano. I'd really love to see Comcast's faces if he had the money to fly out and join the crowds. They'd probabely carry him beside Nagano and NBC would be like WTF?