Ube found for us last month and posted on SMF a notice about an event that at first we weren't sure if it was legitimate or not. Given that there has been notices of "trials" before (like Taiwan's that never took place) and some that even took place without it being tied to Sasuke at all (Like Ninja Warrior South Africa), we weren't sure if this was legit or not. When the application for Sasuke 27 came out I put a tentative "one" for Malaysia hoping it was really happening with TBS' blessing. Well I'm HAPPY to say it is very much legit! 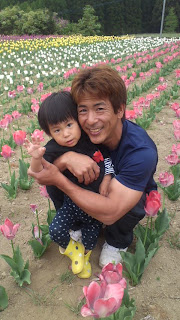 I've been watching their twitter account for a bit and noticed their taking applications all month long (they closed over the weekend and were only taking 100 applicants) and today I got a tweet which made me very happy!
Exciting NEWS... MAKOTO NAGANO will be here on the 27 & 28 ... Make sure you are there to catch one of Sasuke All Stars in action.. @sasukemalaysia (twitter)

Given how annoyed I was that Nagano' wasn't invited to ANW3 in California, and how utterly disappointed when he told me his clothes were requested and not him.. I was happy to hear that he was invited to physically be a part of the events in Malaysia. I want to thank whoever it was who thought of it and was able to get him there with his busy schedule! He will be most pleased to participate and I'm sure the Malaysian fans of Sasuke will be thrilled to meet him in person! (something I'll probably never be able to do.. /sigh sucks being poor) I am trying to contact those involved so we can get some sort of coverage so I can share here on Rambling Rican. Stay tuned.

Ube has been more importantly been monitoring who is actually tied to this event. It's intriguing. One name tied to the event is Datuk Armin Baniaz Pahamin (profile in wiki). Ube found a blog post from him detailing the event back in April. Seems the event is being run by Zai Johari was also the producer for Biggest Loser Asia. Full details are in Armin's blog. What's also very important is the fact that the event is tied to a large one run by the Malaysian Government. It's called Hari Belia (which I'm told means "Teenager" or "Youth" Day). The event takes place the same weekend. Friday, May 27 and Saturday, May 28 in Putrajaya in Malaysia. The event itself coinciding with Sasuke Malaysia is dubbed the 1 million youth gathering. They even have a page for Sasuke Malaysia.

Sponsors of the event
According to the Sasuke Malaysia website, they will receive 1 spot to Sasuke 27 courtesy of TBS! 100 contestants will participate in the Sasuke Malaysia (yes the application stage is now closed) and one lucky winner will head to Japan in July, 2011 to participate in Sasuke 27. Makoto Nagano will be part of the festivities and I'm excited! Go go Malaysia!
Posted by Arsenette at 12:28 AM

Hi Arsenette, Glad to meet a fellow blogger with the same interest. DO take care..

Happy to see you here :) Thanks again! Much success to Sasuke Malaysia. Appreciate all the hard work in promoting it!

This may seem trivial but I'm also pretty miffed about the clothing thing... I suppose they get a pass since it's for charity but c'mon...

So cool! Thanks for posting this!

Oh Rufus it's not trivial... that pissed me off something fierce.. hearing it from him how frustrated he was (and that was after he said the week earlier when I told him the competition was even happening "oh.. they probably won't invite me again" then THAT happened.... ) it was interesting his wording on the whole subject.. you could tell he was miffed too but being a diplomat about it.

Btw is your FB "archived" as well? I've been noticing pages disappearing including yours.

Uk I don't think he had any clue. He's discussed that a few times in interviews and whatnot that he is shocked people like him enough to invite him. Though in the past he has been invited and TBS/M9 had blocked those.. I'm happy he's now taking it on himself to go and TBS actually backing him.

I'm thrilled Malaysia is getting a spot. I'm hoping if the competition goes well and they find really good people that TBS will surprise them with multiple spots. It has been done before.. so hoping for a great event!

Tehehehe well it's cheaper and Nagano gets the added bonus of finally getting to the UK. He was supposed to go eons ago but the deal fell through (not it wasn't tied to Challenge).

It's cool that Nagano gets to go to Malaysia. I hope he has a good time. Wonder if he'll try durian? *Snickers* Considering what a finicky eater he is, probably not.

Btw, when was Nagano supposed to go to the UK? Was it for something official or just to visit?

Oh sorry just noticed the question there Tiger. Unsure of exact details since it was years ago now. Just arrangements fell through is all I remember.

Oh and UK.. I didn't even THINK about that..