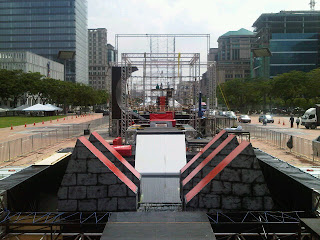 As I blogged about before Sasuke Malaysia starts tomorrow! Not only is it legit... it kicks all flavors of.. well .. you know :) I'm truly excited. You can tell the obvious TBS influence big time. The course is like 1000 times better than that crappy ANW.. but of course G4 would never get TBS to help build their course.. they'd rather jerry rig it to their specs.. I mean seriously.. I want to see ANW turn into Sasuke Malaysia and I haven't even SEEN Sasuke Malaysia yet. THIS is how you do a trials for Sasuke.. The fact that it isn't a Survivor clone and actually has 10m spider climb into a 10m rope climb as a 2nd stage is just all kinds of awesome. I'm seriously passing popcorn! 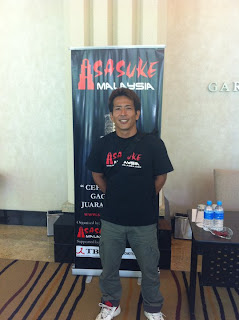 All-Star Makoto Nagano 長野誠 arrives in Malaysia ©Sasuke Malaysia
Obviously being Rambling Rican I am interested in what the All-Stars are doing :) Nagano arrived on er.. Tuesday night? I think.. I lost track LOL yes.. stupid time zones. Lots of activity since the show is encompassed by the bigger event going on that day being hosted by the Malaysian Government. 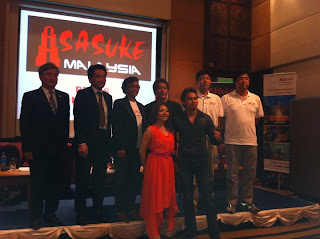 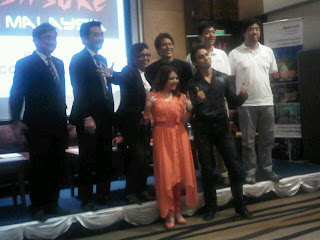 Sasuke Malaysia Press Conference was held at the Marriott Putrajaya I believe on Wednesday, May 25, 2011 in the afternoon. Seems the organizers, guest (Nagano) and television host for the event actor Jehan Miskin assembled with the media to speak about Sasuke Malaysia. 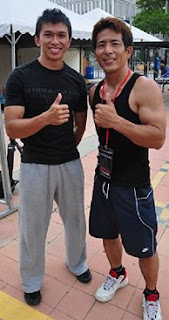 I love the above pic.. he wears shorts.. LOL Something I've been complaining about for a while.. seems Asami bought him some shorts.. LOL I'm excited for the event! Starts tomorrow! I'm told that it will be televised but not sure what channel, etc. etc. Seems it will be shown in a series? If I find out more information I'll post it.
Posted by Arsenette at 3:21 AM

Wow...I agree, this course kicks ANW's butt BIG time. I'm sooo looking forward to see some live action footage of this one!
But even if they had the crappiest course in the world, the fact that they actually invited Nagano and not his clothes...well, you know how that goes.
Go Malaysia!

I'm with Arty. Working WITH the show you're hoping to emulate...what a concept! I also love the fact that the Malaysian folks realize what an inspiration Sasuke can be for regular folks.

Thanks for finding all the pics, etc.

If only the US course could be this AWESOME. Wish I could watch it.