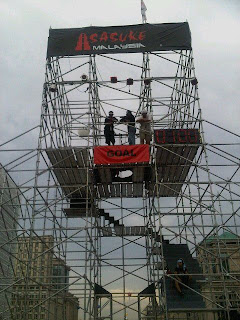 
As I mentioned before, Sasuke Malaysia was in full swing today! Pretty quiet day for those in twitter unlike yesterday. For some reason there was a massive clampdown on pictures and whatnot today.. which makes ZERO sense especially since the event was open to the public, in the middle of a road, during an event with 1 million youth and it wasn't a closed set.. but I digress. We did get one ninja'ed picture today from twitter which is what I wanted to see.. but it wasn't set up.. so I had to wait until the day was over to see if Armin was going to blog... 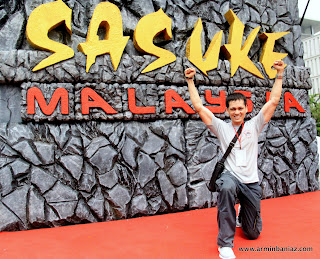 Datuk Armin Baniaz Pahamin (photo from day 1) ©Armin Baniaz
And.. HE DID! Ooooooooh Thank you! Thank you! Thank you!... Datuk Armin Baniaz Pahamin (profile in wiki) has been kind enough to keep us ridiculously updated! Here is his blog entry for today. By the way I put his picture just above so you know who to thank for these glorious pictures! He did pick up with Stage 1 conclusion (he had to go back to work yesterday so he doesn't have the middle competitors). 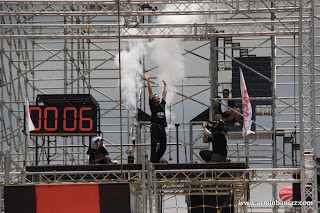 One VERY happy competitor ©Armin Baniaz
Anyway they picked up right where they left off yesterday (due to the heavy rains from yesterday morning delaying production on the first stage). They started with #85 and continued from there. There were more than 100 competitors running and the weather did not hamper the production of Sasuke Malaysia this time! 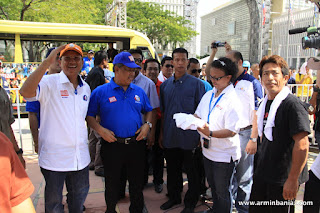 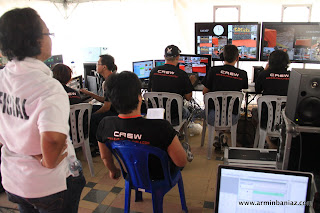 Sasuke Malaysia crew very hard at work producing the show ©Armin Baniaz
I love this picture.. Remember I was a film major in college.. and wanted to be an editor (before life decided to throw me a curve-ball)... so this is RIGHT up my alley :) From what I gather the production went pretty smoothly. 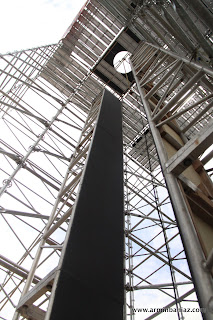 FINAL STAGE!!!! ©Armin Baniaz
AAAAAAand THIS is the picture I wanted to see.. I was hoping they kept what they were proposing in the newspapers. Here it is.. 10m spider climb into a 10m rope climb. WHOOT! Go Go Sasuke Malaysia! (Update on the tower - Btw got an update about the tower - the tower is 20 meters high but the obstacle is only 9m of spider climb and 5m of rope climb). Now.. under penalty of death I can't say who won... because I don't know anyone in Malaysia.. LOL But they do verify that ONE competitor from Malaysia will be joining the Sasuke 100 competitors (with 11 Americans) in Japan for Sasuke 27 sometime in July! When will THIS competition air in Malaysia? Who knows.. but it will be a HELL of a lot earlier than ANW3 will air in the States I'm sure.. If it does happen and I get a copy of it I'll do what I can to blog it. Thanks again for the really nice people in Malaysia who kept in touch with this Crazy Lady in the other side of the world! I wish there were more competitors from Malaysia going (especially since the Americans have 11) . Can't wait to see Malaysia's champion in Sasuke 27!

Edit: Nvm.. I didn't have to wait long.. LOL Just wait for the television host to tweet :D


Short clip from TBS (reposted by Sasuke Malaysia ©TBSi
Posted by Arsenette at 8:25 AM

That's a scathing remark.. I don't agree with you.

Watch what? This hasn't even aired in full in Malaysia.. LOL Unless you are talking about something else?

Are you confusing the international sales office "news" section over what is being sold worldwide?

i dont know maybe? i am only using a phone to search

Yeah.. I think that's what you are doing. They don't sell it.. hell.. it hasn't even aired in Malaysia.. and that won't be until the end of August.

Hi Arsenette. I noticed that participants only had to be 16 to be in Sasuke Malaysia. Why make it 21 in the US?