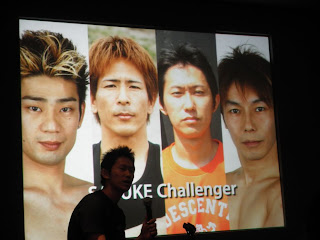 Sasuke Champion Yuuji Urushihara 漆原裕治 in Front of a jumbo-screen announcing the event at the Apple Store in Ginza
(Left to Right on the Poster- Naoki Iketani 池谷直樹 - Makoto Nagano 長野誠 - Yuuji Urushihara 漆原裕治 - Daisuke Nakata 中田大輔)
As I mentioned in my previous blog, there was an event on Tuesday, September 21, 2010 in downtown Tokyo in the area called Ginza 銀座. It's actually an Apple Store. If everyone remembers that in the Spring Monster 9 actually got an ap for the Iphone called Sasuke Challenger that was available for purchase worldwide! Please read Ube's review of the initial release. The four Sasuke Stars that were in the event were Allstar - Makoto Nagano 長野誠 and our current Sasuke Champion Yuuji Urushihara 漆原裕治 (both who visited the United States recently), Monster box World Record Holder Naoki Iketani 池谷直樹 and Olympic Trampolinist Daisuke Nakata 中田大輔. A friend of mine was able to get to the event and sent her pictures, videos and written impressions to share with us! Thanks! 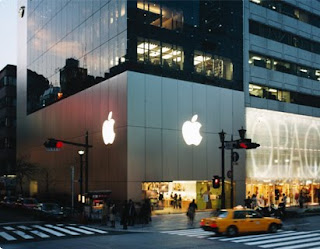 Apple Store in Ginza
From this point on this is the email I received about the Ginza trip:

At 5:10 pm, we walked into the third floor auditorium of the Apple Store in Ginza. It seats about 300 people but there were less than 20 sprinkled throughout. The creator of the game talks a bit about how he incorporated high level graphics but kept the game simple because he had to make it a light program that can be easily uploaded. Then the special guests started to play the games. Originally, I think they had wanted to project the game onto the large screen so the audience could watch how they were progressing. But they weren’t able to zoom the camera up that close or the iPhone screen was so small and their hands so big that you can’t see much. Maybe if they had used an iPad, it would have been more visible…. 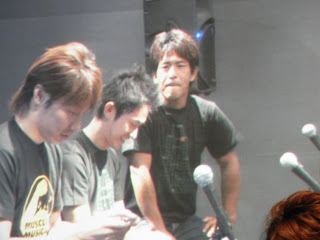 View from the Jumbo Tron (note Nakata's head on the far right of the pic) you see Daisuke and Yuuji playing the game while Nagano watches
Naoki Iketani went first. He didn’t clear. Moaned about it. Then it was Daisuke Nakata’s turn. I didn’t know much about him. I have heard from people who have met him that this guy is a complete sweetheart. By the end of the night, I had to agree. This guy is hilarious. He kept a running monologue the entire time he was playing. Since people couldn’t see the game being played, he entertained the audience with his talk. And animated too. When he has to jump, he hops from his chair.

Nakata: “When do the bad guys come out? Oh, I see one. It’s Yamada-san. (referring to Mr. Sasuke Katsumi Yamada 山田勝己) How do I shoot him down?”
Iketani: “Press the repeat attack button.” (There is no such button.)
Nakata: Okay. Got rid of him. Uh, that was nasty. Hey, if I complete the first stage, does my character evolve into Makoto Nagano?
Allstar - Makoto Nagano 長野誠 and our current Sasuke Champion Yuuji Urushihara 漆原裕治 playing Sasuke Challenger together
Next it was Yuji Urushihara’s turn. But Nagano got bored with how the event was being run and suggested that they play at the same time to create more excitement. They don’t race against each other like Wii games and we still can’t see their screens… but at least there would be some interaction.

Nagano is not a games type of guy, not a high tech guy. But apparently, before the event, he did manage to clear the First Stage. But not under pressure… His game ended the same way as Iketani and Nakata, running out of stamina and missing the rope wall at the end. The highlight of his turn was when he pressed the menu button by mistake (something he must have done during the practice as well because Nakata would refer to it as the "Nagano button") and paused his game. Nakata is just cracking up.

Sasuke Champion Yuuji Urushihara 漆原裕治 defeats the first stage of Sasuke Challenger
Yuji Urushihara is the only guest who completes the game. He confessed to having bought the game before the event and cleared the whole thing.

The funniest moments of the night really came from the goofus emcee who knew very little about Sasuke. He gets into this thing: “So people are curious about what you do when you are not doing Sasuke. Urushihara-san, can you tell us a little about what you do.”
Yuji is like: “Well, as you know, I am a shoes salesman, so when I’m not doing Sasuke, I’m…. selling shoes.” (We all know he's a shoe salesman for Haruta Shoes in Tokyo) He started laughing and everyone just laughs with him. It was just too obvious. Then he adds “I haven’t gotten any word about when the next Sasuke will be, but I am training with my buddies to prepare.”
Then the emcee has a better one. “So what kind of fish do you catch in Nagano Prefecture?” The room is still. No one knows what he is talking about. Then Makoto Nagano slowly says, “Um, Nagano is my name. It’s not where I live…” (referring to Nagano Prefecture, home of the Japan Alps and former winter Olympic site). Then everyone laughs. Iketani quips, “There ain’t no ocean in Nagano Prefecture!” Nagano is laughing and says, “What is this? Am I the punchline of every joke tonight?” Laugh track.

Audience participation video
Then it’s audience participation time and a man with glasses and a little girl volunteers. Since they are given no instructions on how to play the game, Nakata decides he would teach the girl how to play. He remarks how she is doing awesome. "I've got to go over and make sure she doesn't press the Nagano button." Then Iketani quips back "Nakata-kun is going over to help so that'll mean she'll never clear it." The man with glasses is plowing through the course too. Nakata says, “Hey, you two must have been training for this game at Inba Mura.” (which btw is where Bunpei Shiratori 白鳥文平 is from) Nagano walks over and he also comments on how well she is doing. Nakata was teasing Nagano but it was all in fun.

Then Iketani says, “Yeah, yeah. It’s easy to do well on the first part. But then she’ll run out of stamina at the end.” NAOKI, ARE YOU FOR REAL??? ARE YOU ACTUALLY JEALOUS A LITTLE GIRL WILL KICK YOUR BUTT AT THIS GAME??? 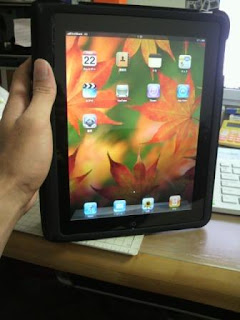 Naoki sporting his brand new Ipad that he bought the day of the event.. you know.. the one he swears he need to win the game.. ©Naoki Iketani
The bespectacled gentleman clears the first in record time. The little girl is getting close. Nagano and Nakata are completely absorbed. Yuji walks over and smiles. Nagano whispers encouragement the whole time, “You’re doing great. Keep it up. Oh, good job.” And they count down the last seconds as she climbs to the top. She clears it – when Nagano, Nakata and Iketani failed. Her coaches, Nagano and Nakata look exhausted. Yuji has big smile. Little girl beams, gives a peace sign. Iketani says, “If I got to do it on my iPad, I could have completed it too.” OMG, YOU ARE SERIOUSLY JEALOUS. Little girl and man with glasses get Sasuke towels.

Yuji mostly looked nervous. Nagano looked preoccupied. It wasn’t a well-organized or well-publicized event. But Nakata made it entertaining for all. And the game, it wasn’t bad. Because it’s so easy, it’s more for the non-gamer. But for five bucks, it’s worth getting and trying with a group of friends.
Posted by Arsenette at 4:44 AM

So funny! Had no idea that Nakata was such a riot. "Nagano button" - too funny!

I heard from Meri that he was but it's different when you see it yourself! LOL

That was funny. Loved the part about the "Nagano button."