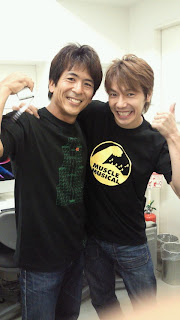 All-star - Makoto Nagano 長野誠 with Olympic Trampolinist Daisuke Nakata 中田大輔 ©Daisuke Nakata
As I posted recently, there was an event on Tuesday, September 21, 2010 in downtown Tokyo in the area called Ginza 銀座. It's actually an Apple Store. If everyone remembers that in the Spring Monster 9 actually got an ap for the Iphone called Sasuke Challenger that was available for purchase worldwide! Please read Ube's review of the initial release. The four Sasuke Stars that were in the event were Allstar - Makoto Nagano 長野誠 and our current Sasuke Champion Yuuji Urushihara 漆原裕治 (both who visited the United States recently), Monster box World Record Holder Naoki Iketani 池谷直樹 and Olympic Trampolinist Daisuke Nakata 中田大輔. Nakata posted a blog about the event a couple hours after it happened. 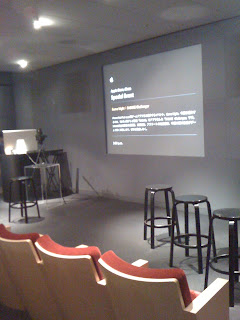 Event Room in the Apple Store in Ginza ©newibusigin

The big news out of the event was that Yuuji made it very clear that there is no Sasuke (26) date set and none of the M9 staff disputed him so that was made clear. A previous Nagano message I received last week stated that a decision about the fate of Sasuke will be made sometime in October. Coupled together with the Yuuji news that makes it unlikely to be a Sasuke in October (unless it's late in the month) but hopefully by October we will find out the fate of the show. If I find out more news, pictures, etc., I'll post it.
Posted by Arsenette at 6:44 AM

No date...this SUCKS. I can imagine the collective WTF faces when people asked Yuuji about it and he couldn't answer...
Gotta keep trying to be patient :'(
Anyway, thanks for posting. Cute picture! Nice to see Daisuke.