No update on Sasuke 26 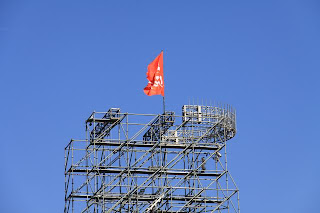 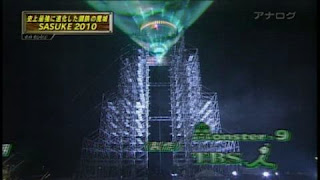 The final shot of Sasuke 25 on TBS
What we know now is very little. The original date was projected to be around September, 2010. Everything from competitors being told this back at the end of Sasuke 25 to even as recently as June/July when G4 was propagating that rumor with their ANW2 application. As the months wore on another rumor pushed the tournament to October, 2010 but with no update directly from either Monster 9 (the creators of the show) or TBS (Tokyo Broadcast System which is the Distributor) it's impossible to know for sure if there even will be a Sasuke 26 let alone this year. If it is October, 2010 Monster 9 has done nothing to promote that date on either of their websites. TBS will only post on their website when a final airdate is being promoted. Fans and competitors alike around the world are just as confused as to the no news given that by now we figured we'd at least hear SOME news out of M9. Japan especially has been on edge given that unlike the Americans, they have not had a Sasuke Trials yet for Sasuke 26. USA is the only place there has been a trials and there still is no word on whether the scheduled Trials in Taiwan ever came to fruition. 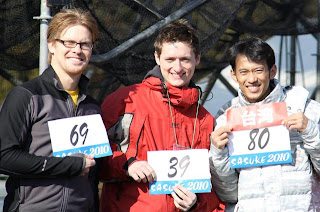 Brian Orosco ブライアン・オロスコ, Levi Meeuwenberg リーヴァイ・ミューエンバーグ (with original number) and Lee En Chi リー・エンチ during Sasuke 25
With the heavy promotion of ANW2 (even in Japan) it was thought that it would possibly be followed by a Sasuke 26 quickly in it's heels. G4TV even had on their application a possible date revolving around a week in the middle of September as a target date for competitors entering ANW2 to be available for taping in Japan for the tournament Sasuke 26. That.. would make it this week. Obviously by now we know that's not just not happening now.. if it is.. there's a whole bunch of regulars who would be missing out on it. 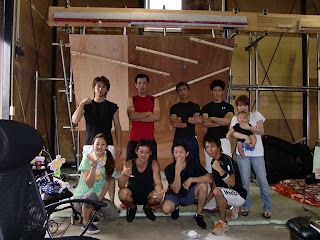 In the meantime it's been full steam ahead for training in Japan. Would be competitors, newbies and former STQ'ers (Sasuke Trial Qualifiers) have sent their applications for consideration provided there even is a Sasuke 26. Monster 9 has updated their SasukeMania site with an new Monster 9 address (which serves as the destination for said applications) and as has been from the start, there is an ongoing call for applications on their site. What's funny is that I emailed TBS about Sasuke 26 and even they sent an automated (what I call "canned") response that sent me an address to send my application to.. yeah.. me.. LOL obviously they didn't read the email and just saw "Sasuke and hit an auto response". 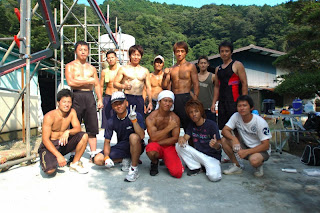 Training at Kishimoto's camp ©Shinya Kishimoto 岸本 真弥
There's a lot more questions though as to the state of Sasuke NOW than it has been even back in April, 2010 when I first wrote an extensive blog about my concerns. Even with M9 pulling the plug on it's mobile ap it's been pretty much downhill with Sasuke in Japan since even before I wrote the blog. Their own stars don't even know the fate of Sasuke when by now they should have either been recording it or planning for it. Given how fragile the show is now.. it's not helping them be calm about the situation.. all they can do is train and be ready. 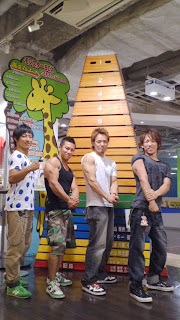 Possible solutions would be to actually do a press release and explain the situation. Communication going a long way towards easing the fear of it's intended audience. In the past there has been massive gaps between tournaments. Sasuke 16 was aired on December, 2005 (after being the 3rd of that year! (Sasuke 14 was in January, 2005, Sasuke 15 was in July, 2005 and of course Sasuke 16 in December, 2005)). The next tournament wasn't until October, 2006 (10 months later) and the only Sasuke to be taped/aired in Japan for the calendar year 2006 . That tournament was Sasuke 17.. and we know how that tournament turned out. I'm hoping that with this precedent we have hopes that even with a delay there will be another Sasuke. The only fear I have is that it has already been 8 months from the taping of Sasuke 25 and 7 months from the airing..

Sasuke Stars having fun with the Warped Wall during ANW2©travisio2010
We all know that TBS is the key to the issue here. If you don't understand, I'll explain why. TBS gives Monster 9 a list of dates available for taping. After all, it's the TBS lot that has to be rented, TBS also helps finance the event by helping build the course, TBS gets the sponsors to buy advertising during Sasuke, TBS is also the distributor and it is their television station that allots time to show Sasuke in the first place. Getting blocks of 3-4 hours of time to show an infrequent variety show poses some challenges especially considering how busy this time of year is in Japanese television. It's also difficult this year given the economic recession (especially in Japan where TBS is cutting down even in their own programming in lieu of cheaper produced content). The longer it takes to slot that time the more likely it is that we will not see Sasuke this year. After all, Holiday events are booked well in advance. While it is entirely possible that they may have it pushed to next year it would be nice if some announcement was made. Otherwise.. those of us who fear a cancellation are given no reason to stop thinking this way with a tournament that was delayed indefinitely given the dismal ratings from Sasuke 25 in Japan.
Posted by Arsenette at 2:24 AM

sigh...at this point the matter isn't the fear of cancellation etc - I still think (hope) they're not cancelling it - it's just the frustration of not knowing jack squat.
Reading everything I can, trying to hope for the best, and keeping fingers crossed.

The last few hours have been.. eventful. Some sad news and then some good news.. no news on 26 yet.. but there is "some" movement lately.