Beach sports Miyazaki Prefecture Competition 2009 Banner ©MRT
As I blogged about before, this weekend was the Beach Sports Miyazaki Prefecture Competition in Miyazaki City, Japan. This marked the first qualifier (that I know of) for Sasuke 23. The event was unfortunately rained on all day. Even from where I am in South Jersey I checked the weather reports and saw friggin thunderstorms rolling in the area. I logged in the following day and sure enough Ube was there to find the first set of pictures from the event. Did I explain how much I love Ube? Yes yes.. I do :) He's awesome :D 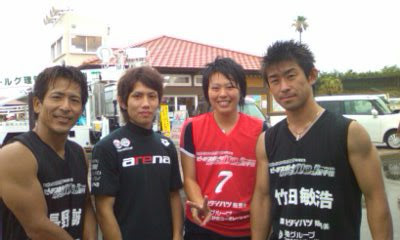 Makoto Nagano (L) and Toshihiro Takeda (R) pose with competitors of the MRT Beach Competition ©JoyFit Blog
First and foremost Akiyama wasn't there :( Even knowing that ahead of time I was still hoping he would show up since the MRT site still had him listed. Either way, Nagano and Takeda were still there. They sported their own shirts with their names on them. Soaked like puppies in the rain.. Takeda .. still.. looked the same.. LOL Maybe because he is constantly sporting the "wet-look" hairdo he's famous for.. I don't know.. and btw.. why does Nagano always look like he's protecting his privates in these pictures?? LOL Still.. I can't believe I'm finding Takeda looking hot today.. dunno.. maybe because he let his eyebrows grow in a little and they don't look "pretty" anymore :p I feel myself digressing badly. 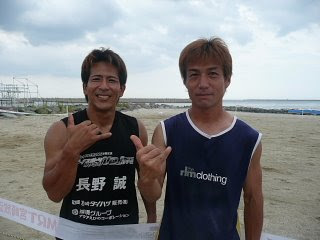 Makoto Nagano posing with another competitor ©Personal Blog
Ube found 2 blogs (technically 3 since one of them (the picture below) referred to his friend (the picture above) who posed with Nagano after his demise from the competition. The first blog was of a lady from Miyazaki who had the group picture shown above who apparently at least survived the Beach Flags competition (it's unsure if she's going to post more after that right now). 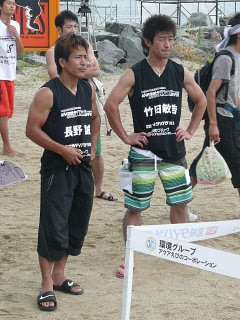 Makoto Nagano and Toshihiro Takeda ©Personal Blog (hey.. those are the same shorts from last year Takeda :p Makoto went shopping ;p )
The next 2 blogs were friends who went together. The second blog Ube found had the picture above where he was pissed he lost the beach flags. He also had the great picture above of Takeda (complete with sporting water bottle in his pants pocket) and Nagano (who apparently has a nervous tick and keeps grabbing his pants). Granted I can't complain about Nagano wearing black to the beach again.. the sun wasn't out to burn him this time around although he's already quite tan from the summer. This is also the blog that had pictures of food they had that day.. and home of one of the great bablefish disasters of all time "This is what behavior EMO cattle." Apparently Miyazaki, Japan is home of the EMO cattle :p ahhahahahaah Ehem.. anyway the third blog was of his friend who apparently was jealous of Nagano's magnificent arms.. "Nagano's thick arms Oh ~ ~ ！ ! ！ ! " because HE lost in the Arm wrestling portion of the competition :p
Note that the air date for this event is actually on August 8th (2 PM local time). Still unsure if it's going to be MRT only? or part of Sasuke Navi in TBS.. 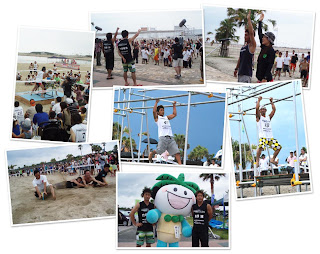 The only photos published from the event by MRT ©MRT 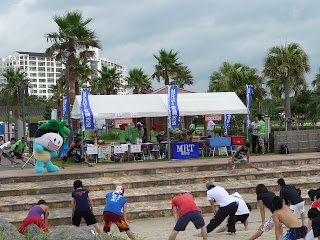 Stretch that groin.. er.. legs.. Nagano and Takeda doing morning exercises to loosen up before the event.

Later in the September Ube found this for me :) A blog with pictures from the actual event :D OH! and high quality photos :D 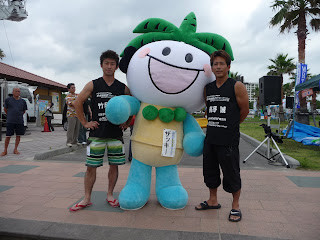 Takeda and Nagano - HQ version of the picture above.
Posted by Arsenette at 7:18 PM

2pm our time or Japan time? On TBS? BTW Just found the blog and love love love it!!!!

2 PM their time in Japan. Since I'm on the east coast that's 13 hours ahead. So for me it would be 1 am on Saturday morning (from Friday). Unfortunately it's most likely going to be on MRT which is an affiliate of TBS in Miyazaki City. (which means all the other feeds we get from TBS come from the Kanto Region (where Tokyo is) and would not be able to see the feed online). I'll keep everyone posted if that information changes since I'd love to see this as well. P.S. Last year they had a 5 hour live presentation of the event and that too was only in that region and we only saw clips of it on the Sasuke Navi show the day before Sasuke 22.

Nice, and as every slightly Sasuke related event I wish I was there, but I wonder, doesn't Nagano look strange in those pics? Like he's worried for something, or thinking about something else,or tired...could it be Kaiou?
Or perhaps I'm too sleepy and my brain keeps working on dream-kind stories.

LOL Makoto always has some sort of sour look on his face :p ahahaha which is why I looooooooove pictures that are candid :p