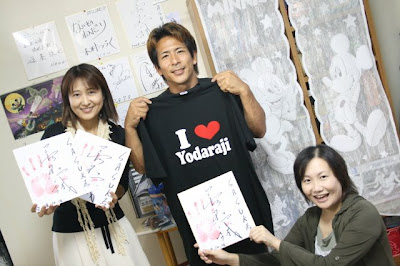 Makoto Nagano visits yodaraji radio - October, 2008 ©yodaraji
.
Just a couple of updates regarding our entries and updates for Sasuke 22. Just yesterday I emailed yodaraji - which is a radio station located in Nobeoka (which absorbed Kitaura, Nagano's hometown) on the east coast of Miyazaki Prefecture. He's been there before a few times and I figured they'd invite him again to promote Sasuke 22. Sure enough they emailed me back saying that they plan to have shows before Sasuke 22 and after Sasuke 22. They were kind enough to email in English!

Nice to meet you.
It is Nagano, but we have broadcast of sasuke in the end of March in Japan.
I plan the appearance request in broadcast front and back.
Future yodaraji in fun!
For the record I've been updating confirmations of entries to Sasuke 22 in my "So excited for Sasuke 22" thread that I started back in February. I added a few new entries from blogs including Yuuji Urushihara, ANC4 winner David Campbell, actor Masaki Nomura and a few other celebrities. With Sasuke 22 taping this Monday I should get more names to add to the list after they get back and start blogging about it in anticipation for the airing on March 30th. Thanks Ube for your help with some of these!

Sweet--can't wait to hear the interview. Love the Mickey and Minnie lace curtains in the background (as in "weird things I notice at the yodaraji studio"). Remember the granny slippers?

Oh my I remember the granny slippers :) Granted it seems they are there at the station rather that something he brought with him... God I hope so.. LOL

And yes the midget girls decor is cute! I remember on the granny slipper picture everyone was trying to read the area rug since it had something printed in English :p

someone managed to make it to the final stage but timed out at the G Rope. =/

Hope to see more review from you soon.Good job there!