All six All-Stars all dolled up! I'm having kittens!! ©Makoto Nagano

Getting ready for Sasuke 22 and I do my usual check on the website that are associated with them. I go to Nagano's first (I use the front page of Takasui) and sure enough there was a long awaited update.. wait.. there were two! At this point they are not on the front page of his page yet - just the Takasui entry page. Looks like I caught the update just as he was posting them (Not Nagano - dude doesn't even own a computer.. it's a very sweet man out in the main office on the other side of the Island in Nobeoka). The first update and I'm soooooooo happy he put up the All-Star picture! I sent him an email specifically requesting it since Nagano said in an email to a fan that they were all there! I was soooo hoping to see it and there it is! Oh.. Takeda is looking hot.. heck.. so is Yamada.. wtf.. I love Shiratori's suit! Akiyama is looking WONDERFUL! And .. dangit I can't see Shingo. Nagano looks great! Traditional wear suits him just wonderful! Awww they all got their eyebrows and hair done too! /sniff 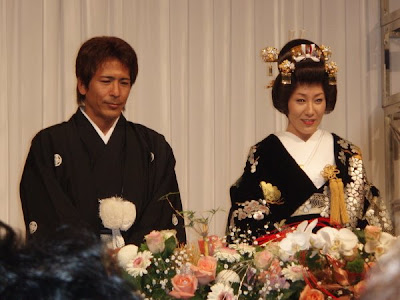 1st reception? Looks like this was the real formal reception. They look right out of a postcard! ©Makoto Nagano

As I noted from the pictures I saw in 3 minutes - I was surprised not to see this one! I can only assume this was the first and main formal wedding reception. All the others were probably celebratory things or that one was a LOOOOOOONG night.. ahahahahha Seriously though... she changed 4 times!! Personally my favorite is the white western style wedding dress that Asami had on to cut the wedding cake. I'd love to see a full view of that dress! 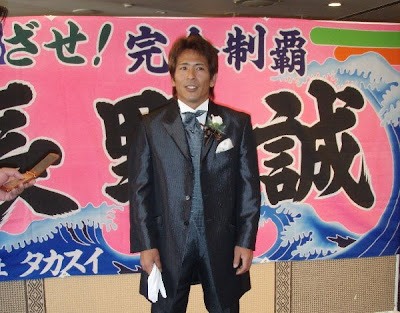 I .. love this picture.. talk about a fish out of water.. ©Makoto Nagano

This is the suit that he wore when he cut the wedding cake. Aahahahaha he looks so out of place! Snowy he did tug at it didn't he? That's friggin awesome! Hmmm.. he's hanging on to some glove. Why do guys just stand like that? Take lessons from Takeda.. dude swaggers and always model poses with a sideways glance.. Nagano just looks like he was a doll placed by a 1st grader propped up against the wall.. LOL He's much more relaxed in traditional wear.. heck.. for all we know he had shorts and that shirt underneath the robe.. LOL 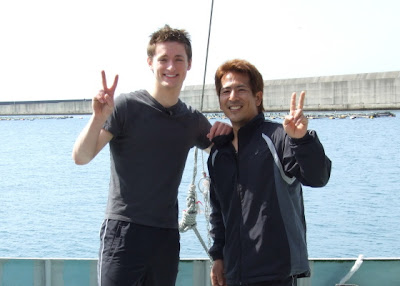 The second update was a surprise! Looks like Levi Meeuwenberg went to Kagoshima to see Nagano at his job in Takasui! There's a ton of pictures that I'm sure will all end up on Sasuke Navi (which is set for Sunday, March 29th).

The 10 minute preview reminds me of the 5 minute Pro Sportsman commercial I found.

Sasuke 21 had Navi.. then a break.. then a 10 minute break thing.. then Sasuke 21.. all in a row it seemed.. this at least gives you 2 days to catch the show which IMO is much better! Also in the past the preview was just a butchered Navi production.. still.. I want to see it.. Set up dem cue :p

Looks like we all know the suprise Olivia was talking about for 22. I wonder if Brian was there too, but I guess if Levi was there, Brian would be too.

I don't know what I would do without you Arsenette (as I don't have the stamina to keep up with Sasuke-related happenings). Where do you get all your enthusiasm girl??

I squealed like a school girl at the first picture, especially Bunpei's quasi-pimp wear ;)

Awwwwww, that's such a sweet picture. Wonder how much the boss and Monster 9 pitched in for the shindig? They better to have paid for the whole thing since they are getting so much use of it. :)

Thanks Elsie. You have once again proved you ARE the GODDESS.

Rufus I did too! I saw yesterday that the company updated the page with ship sales and thought "hmm.. they might update the other stuff too" and voila at 3 am I saw the page change and was squealing with delight! Those pictures were great! I was laughing hysterically at how out of place some of them looked. They did look so cute though. Some more vulnerable than others.. still think Bunpei was hammered beyond comprehension though.. LOL As for stamina.. I"m trying not to go nuts this time. I got really sick after Sasuke 21. I'm trying to pace myself.

Ube's been working really hard behind the scenes. I'm taking a hint by not posting everything I find (You can read a lot of it if you go to the proboards I have listed on the Links section on the right side of the page. Sasuke 22 section is locked down so only members can read.. just sign up!).

Sam I don't think Brian was there. It seems he's injured and decided not to go. I can only assume he was invited to go back again (which is good.. anyone who made it to the 2nd stage should get an invite back).

Thanks for update~ It was really weird to see Nagano in western suit. It doesn't really suit him well. He looks better in traditional garb. Quick question for ya, which Sasuke did Nagano wear white shirt? The reason why I'm asking because I'm watching Nagano montage on youtube and I was surprised to see him wear white shirt instead of his trademark black tank top. Can't wait for 30th to arrive. ^____^

He has looked okay in a black suit.. it was the color, the style and .. my husband is going "wtf is up with the polyester?" LOL

When he won in 17 he had a huge celebration dinner, etc. and wore a darker suit that looked as if it actually FIT him:
http://www.takasui.co.jp/main/sasuke/kinkyo.html

As for the white shirt it was Sasuke 11 - the one he made it to the final for the first time.

Thanks for answering my question about white shirt. Mucho appreciated it. Yeah, I saw few pictures of Naganao in darker suit and he looks much better in it than the one in polyester.

Hi!! I am Arianna,a 16 years old from Cuneo,Italy. I love watching Ninja warrior and reading you blog...It's amazing! I just read on the competitor's list that Bunpei won't be at Sasuke 22..Do you know why? Did something happen? I am devastated! Thank you for your time...kisses!

Welcome! Hope you get the opportunity to see Sasuke Navi on Sunday and Sasuke 22 on Monday!

I only know from the past that he missed Sasuke 20 (also in on a cold day last year) because his back was bothering him. He still wasn't 100% for Sasuke 21 so I figured his back as not strong enough to do 22 either :(