Over the past 24 hours, major news has come out that have been in the works for at least a couple of years (possibly longer). TBS President went ahead and announced their plans to create a Sasuke World Cup. He didn't mention timeline or format, however he did confirm that it will be held at Midoriyama Studios (which is not a mountain..) in Japan and run by TBS. As more information comes out I'll post whatever is publicly posted. There's a LOT going on in the background and this has changed a few times. This will be an international event held and hosted by TBS at the same site that Sasuke normally records. They've learned the lessons from the previous failed attempts (we are looking at you ASEAN Open Cup) and after seeing the USA do a much smaller version on American soil, they are now confident that people will be interested in their own version in Japan shifting the focus back to the original show which is still very much in existence. I'm excited because they are tying more things to Sasuke Japan giving it more relevance and importance. Should this work, Sasuke Japan (the numbered series) will continue for many years to come. This also will give an outlet to the foreigners that up to now have been either locked out or severely cut from the Sasuke Rising era of the original show back in Japan.

I do find it amusing that they mentioned the WipeOut lawsuit (that ABC lost) over the fact that ABC stole the TBS concept of Takeshi's Castle (what we know as MXC) in order to try to get away from paying TBS for the license fee in this exact article. It's odd because they never mentioned that before.  Still, they have the right to their own format and don't need to pay anyone to do it.  I think this past year has been a huge lesson to TBS.  NBC has their own format but they at least are partnered in (and paid for the rights, something ABC never did) so there's no lawsuit there since it's with TBS' blessing that ANW exists.  However, I don't see NBC as being a part of this.  The formats differ in a lot of ways and the focus of the shows are now opposite of each other.  TBS promotes Sasuke and NBC promotes ANW.  They are no longer the same show.  Curious how it's going to affect the ANW: USA vs. Series that is normally running on NBC the past couple of years. Hopefully TBS' plans will come to fruition and we see a different take on the Sasuke international front. Everyone by now knows what I feel about what NBC did to that international competition.  My HOPE is that it will be within a year. I know a lot has been coming out of TBS and Sasuke lately (especially with the reorganization of Sasuke Europe) with TBS trying to get their show back under TBS control. It's only fitting honestly. Priority wise (and listed last in the article) is Sasuke 31 airing this summer and by now you all know the taping date for it since they announced that publicly too in the past 24 hours. LOL

Speaking of which.. yeah.. so.. right. I'm laughing so hard right now. Here I am being super careful not to reveal the taping date and they announce it worldwide on their website! ahahahahhaaha Now ya'll who contributed to the IndieGogo know when I'll be in Japan! I can now use my now 7  year old video!! SO EXCITED! SO EXCITED!  ONE MONTH TO GO!  That's cool though they will have a lottery audience drawing! I hope it works and it brings excitement to the show! I gave them the suggestion a few years back and it worked well with the early airing of Sasuke 30 (that also had a lottery). I am sure people will LOVE being able to see it live as it tapes! So if you live/work in Japan, it can't hurt to send in your information to be invited to watch! Remember that this is a lottery, it is ONLY for audience participation (since Auditions are complete) and you pay for your own way. 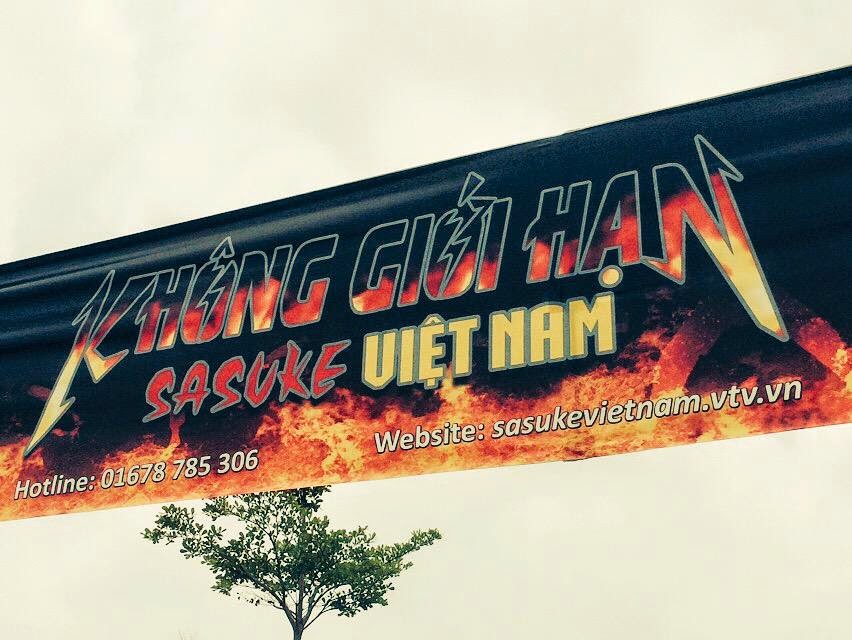 Oh yeah.. Sasuke Vietnam almost got reckt! I kid you not.. a couple of days ago I read about Sasuke Director Masato Inui 乾雅人 running for cover because they were having storms. I knew they were going to have thunderstorms.. but I couldn't believe what happened. A TORNADO HIT THEM! 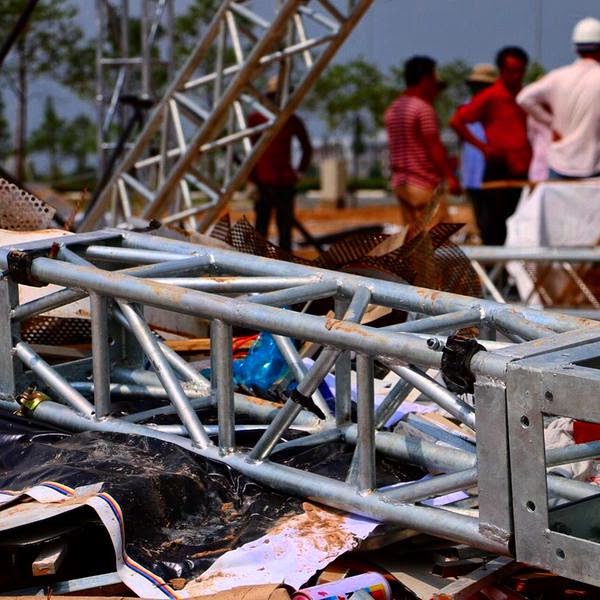 
When the sun came up they realized the extent of the damage.  Luckily no one was injured (just severely shaken) and in typical Inui fashion he joked that Mothra was flapping it's mighty wings totally wrecking the place. LOL (Please say I'm not the only one old enough to get that joke... /cries) 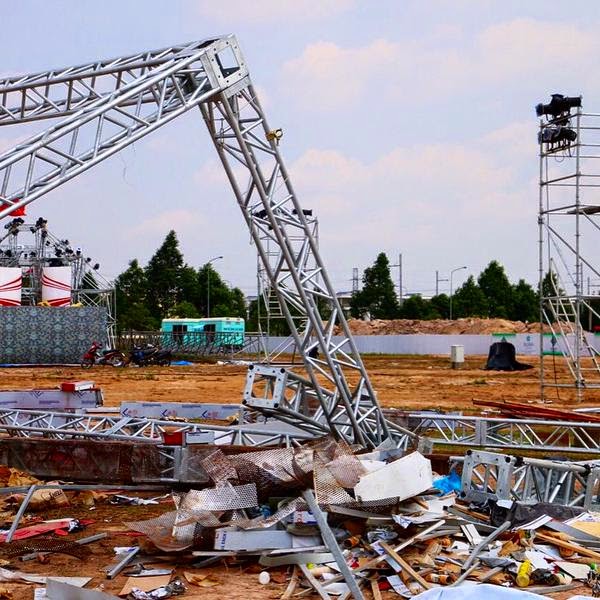 
They got super lucky because the only things that were damaged were announcer booths, and light riggings.  The course itself was undamaged. Seems where the tornado touched down was just to the side of the course, so outside of litterer debris, they don't have to rebuild the course. If you notice in the left in this photo, the Jumping Spider is far in the distance. 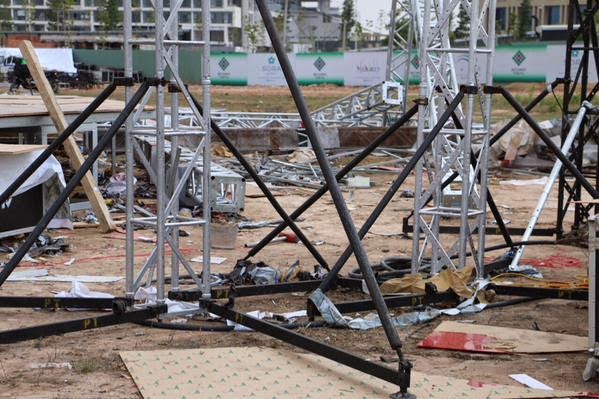 
Inui mentioned that they do have to rebuild a 7 meter (about 23 foot) steel light rig that was blow off by the tornado from it's original position and mangled on the ground.  I'm assuming that this is what we are looking at.  So while the production staff will have to move to another location while they film, it could have been a whole lot worse. 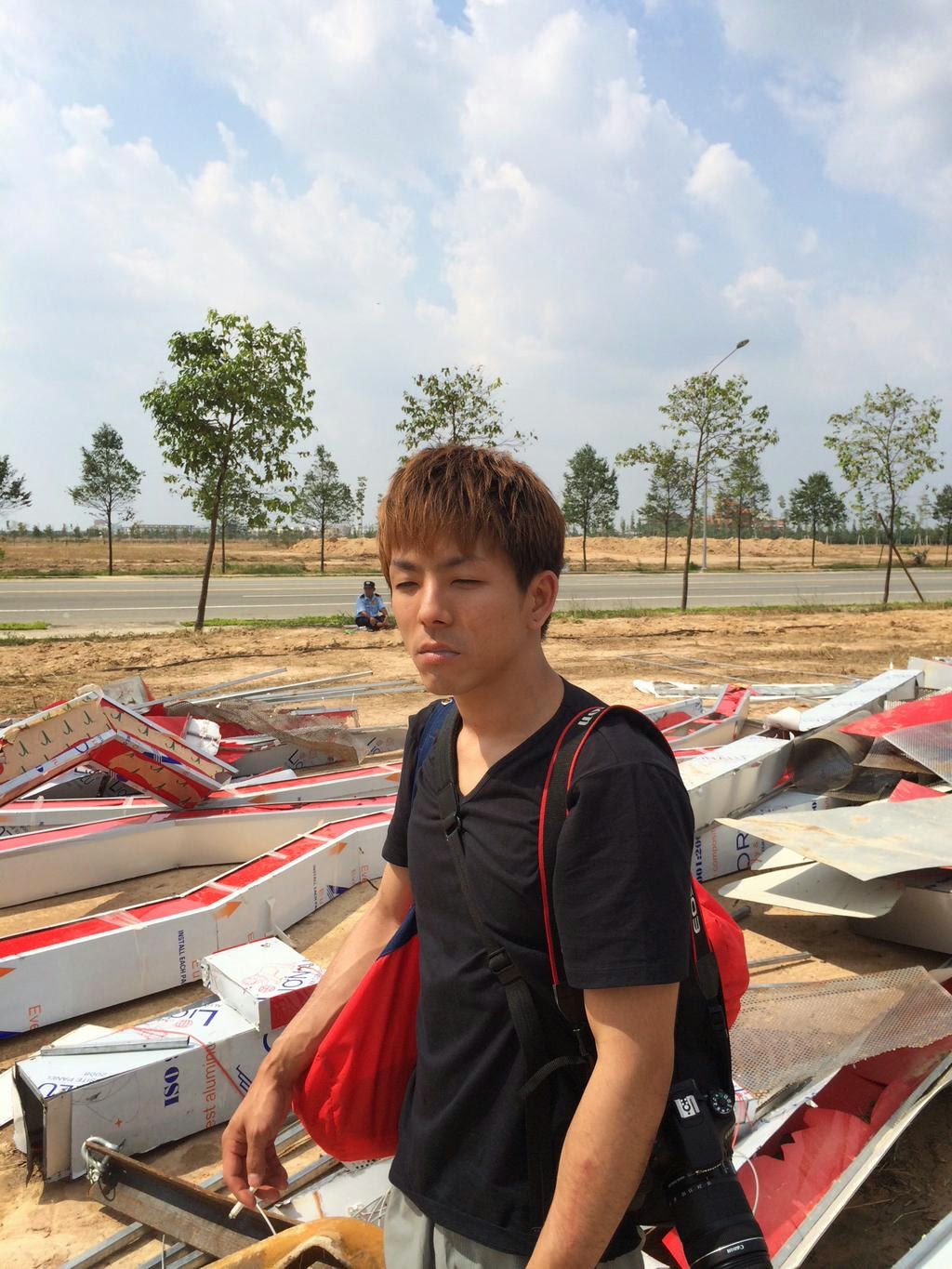 
They are obviously shaken up.  The power of a tornado that ripped a 7 meter/23 foot metal rig and turned it into bent mess way off from it's original position could have killed them. Especially considering that everyone was on set that day.  So needless to say, Inui was right that they had a close call and are lucky to be alive. 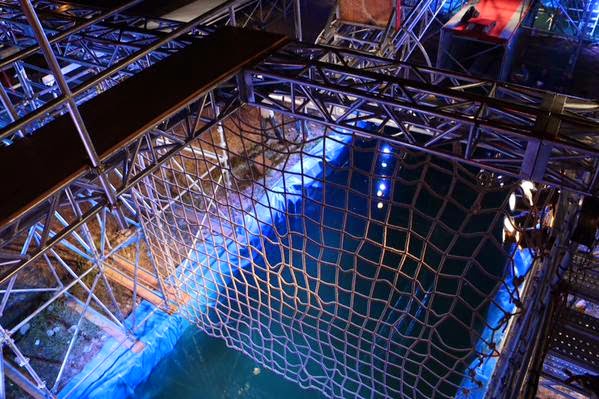 
24 hours later Ryo started to post photos of the course under the lights.  From a production standpoint, the show must go on.  The final auditions were yesterday and today with production for stage 1 officially starting on Friday.  Vietnam floated the idea of doing a Japan vs. event last minute but everyone is balking at it because it's sooo close to Sasuke 31 that they didn't want to risk injury.  Now that we know the date, they are right.. with a month to go until taping of Sasuke 31 in Japan they can't afford to do it. I hope they don't get any more tornados and the show can continue taping without incident.
Posted by Arsenette at 9:26 AM

Hmm...the lighting rigs were damaged, but the course itself was not? Guess even the weather is a Sasuke fan. :P

(facepalms about how behind I am on news) Considering that Toho has done Mothra reboots sporadically and that Mothra's probably one of the best-known of the giant monsters (I would put her up with Gamera, both right behind Godzilla, IMHO), I would hope getting a Mothra joke isn't age-dependent... Shoot, Crunchyroll even has Destroy All Monsters available for streaming, which featured Mothra, so folks have no excuse. That said, thanks to you and Inui (and that's a great blessing that no one was hurt and that he was able to make Mothra jokes instead!) for getting the Mothra song stuck in my head.

Re: Sasuke World Cup: interesting. It will be better if TBS is in charge of it, since when they want to they can pull of coordinating something like this.