I REACHED THE GOAL! We're going to Japan!


I'm actually pretty sick right now (I have a bad cold) and I woke up later in the afternoon after a NyQuil induced coma. I logged on to see that we were 13% left on Friday the 13th (which I found amusing). I went to get something to eat, heard an email notification, went back to my computer then BOOM I saw we jumped to 104%!!!  WE HIT THE GOAL! 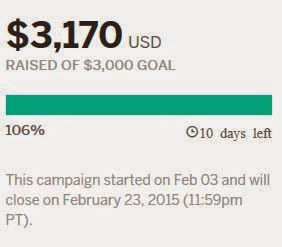 Contributions are still coming! (Thank you). We still have over a week left until this campaign closes so if you were still thinking of reserving your Sasuke 2015 T-Shirt or Towel or ordering signed photos, etc. there's still plenty of time to do so!  The campaign closes on February 23!

Also, some of you have asked if I will be taking orders, etc. after the campaign closes (since the transition from one IndieGogo campaign to the other was not entirely smooth), the answer is yes! Just message me and we can work that out privately. I'll keep taking them until about the end of March or April. By then I can do a lumpsum order when they are first being sold. I'd like to get that done before I arrive to save me standing in line for a bunch of them. LOL

Thank you SO much for your generosity and support! I'm THRILLED beyond belief to be able to go to Japan. Thanks to you I'll be able to go there and ask my questions, get all the behind the scenes, see the waxed eyebrows in person.. ehem.. report on all the stuff that I love writing about. I'll continue updating the blog as best I can during the trip and get a report when I get back. I look forward to writing the book! Depending on how much extra I get from this one I won't have to do another one of these for the publishing part. However, I'm not thinking about that now. The trip was the most important part of that equation and thanks to you I'll be able to go! 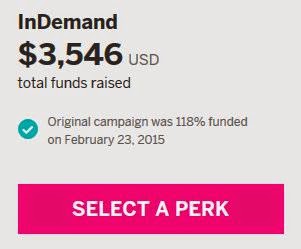 The campaign finished last night while I was sleeping.  I raised a total of $3,546 (116% (118% actually) of the goal!)
Seems also I'm part of a new program that IndieGogo has available.  It's called InDemand.  Because I reached my goal during the campaign period, I can continue getting contributions and perk fulfillment.  So, if you missed being able to get a perk you wanted, want an additional one, or know someone who missed the campaign (especially during the transition period) but still want to contribute, this campaign is still available.  Note that all fees also apply.  I'll be updating my blog soon and post a new page for PayPal links and other contribution options if that is preferred.  (Edit: Posted Paypal button on the right column of the blog just under my name) I've been asked about that recently so this is why I mention it now. Either way, even if I don't get a single additional dime from this campaign, I'm still EXTREMELY grateful for all of the generosity and support during this very stressful time.

It was a leap of faith to try something so outlandish as to ask for help for a trip halfway around the world.  It was really comforting to read of all of the support and kind words from all of you.  I've been blogging for over 6 years now and didn't realize how many people that affected.  I'm overwhelmed by the outpouring of support. I am deeply moved.  Most of you went above and beyond to help spread the word and share the campaign.  You stuck with me when I had to switch midway through the first campaign to start this new one.  (A huge thank you also to the kind contributor of the plane tickets!)  It's amazing how tenacious all of you were in support of this crazy endeavor. Thank you doesn't seem a strong enough word.

I'll post updates on Rambling Rican in the coming months. I'll keep you posted every step of the way as best I can.  Airing for this event on Japanese television won't happen until the summer (I'm figuring same time frame as last year so July'ish? - that's not confirmed yet. It's just too early for that) and I will be bound by NDA .  So while I will be able to share my own personal stuff while I'm in Japan, I can only do drips and drabs of information until the official airing.  Once that is done I will post a lot more.

I'll keep you posted on the book progress which will be a few months after the event (since these things take time) and hopefully if I'm frugal with my spending and/or I get more contributions, I won't have to do another large fundraiser for the publishing.  Again, I'll deal with that part afterwards.
Posted by Arsenette at 11:56 PM

YAAAAAAAAAAAY!!!!! I'm so happy for you!! I can't wait to hear about the trip!

Congrats, Arsenette. It's Rod, here. Enjoy the trip. Take plenty of photos/record everything. For what it's worth, if you somehow pulled off getting something signed by Nagano and Yuuji you could probably auction that off and pay the remaining expenses for the book.

Tehehehe thanks band97 :) I can't wait to share it!

LOL Hey Rod! I'd laugh if I managed to get that and the auction. LOL Would be nice though as I wouldn't have to freak out about the cost of publishing.

Honestly can only imagine that your thinking I should of done this year's ago. So pleased for you hope you have fun.

Actually it's been really stressful (especially with the first campaign). One huge positive is that you guys know my writing over the past few years so it's better now than in the past going "who is this chick?" LOL Still though I'm sooooo grateful that everyone came to help when I needed them. I can't wait to share in the journey when it's time to go. Thank you all!

I'm so proud of everyone that helped to raise this girl's expenses to take the trip after all. I'm proud to be a part of the group that helped in the end (even though it was just AFTER the goal had hit! XD). Say hi to everyone for me and ESPECIALLY to the all stars present (SHINGO! :D) ~LusitaniaAngel313 (so I'm Emily Rose not freaking Ashley! XD)