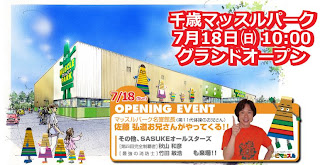 We are now about 4 days until the grand opening of the new Muscle Park in Chitose, Hokkaido that they dub "Chitose Muscle Park" 千歳マッスルパーク (as I mentioned in previous blogs) and we finally get an update as to who will be part of the Grand Opening Celebration. It is this Sunday, July 18, 2010. As you see from the banner, the headliner is in fact TV Host Sato Hiromichi 佐藤弘道. 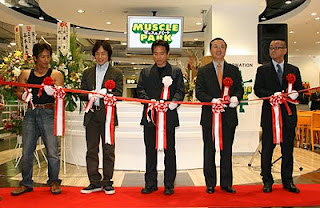 Despite what I may think of Sato.. he's been there promoting stuff for M9 for eons now and was part of the original group with Nagano that opened up Odaiba's park way back in 2006. This time we get 2 different All-Star coming to open up this Muscle Park. I would expect more people to show up but for now the banner suggests we get 2 All-Stars to go with Oni-San お兄さん (Older Brother is the nickname of Hiromichi Sato). 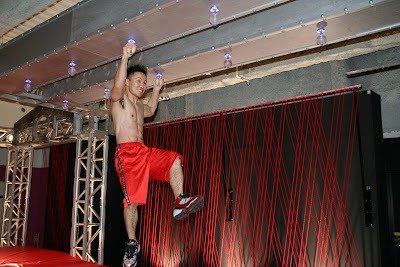 Kazuhiko Akiyama ©Carol Akiyama (From the Rise Up Article)

One of the most appropriate choices is of course the first champion of Sasuke Kazuhiko Akiyama 秋山 和彦 since he is from Hokkaido 北海道 (prefecture wise though he lives further north along the north coast). I am happy to see him be invited to this event! I don't believe they have ever invited him to do anything before so as a fan I am ecstatic that he gets the honor of doing the ceremony in his home prefecture as the first champion of Sasuke. 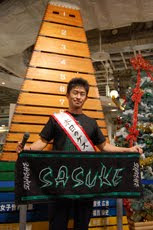 Toshihiro Takeda 竹田敏浩 posting with the famous Sasuke 23 Sasuke Towel ©Muscle Park
The second All-Star to participate is our favorite fire fighter Toshihiro Takeda 竹田敏浩. Compared to Nagano he hasn't headlined in Muscle Park a lot but he has done some events with Nagano (Like the October Sports Festa back in 2008). As for a headlining event.. he finally got his chance for the 3rd Anniversary of Muscle Park back in December, 2009 and then returned again to be with his buddy Nagano a week later. 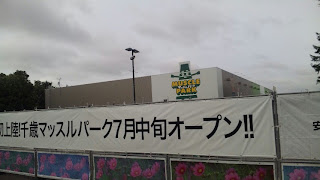 Banner announcing the Grand Opening ©kuliten
So in 4 days I hope to see more posts (some on Twitter have been abuzz with excitement) and I hope they post a lot of good quality large pictures of the grand opening on their website. I know the ones already on the Ameblo Chitose site are very small.. I hope they change their format for this occasion. If not.. going to have to rely on pictures from other blogs. 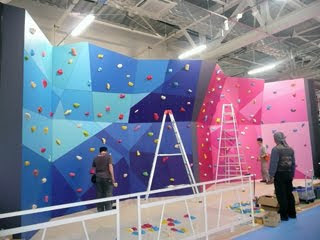 Magic wall? ©Muscle Park Chitose
Finally the blog in Chitose put up another picture of what's going to be inside of the park. Reminds me of Kunoichi 7's Magic Wall 魔性壁 that was never used. I already like the tall ceilings of this building!
Posted by Arsenette at 12:47 AM