Sasuke 24 is right around the corner! In fact.. Taping is Tuesday, December 8th! The actual broadcast is NEW YEAR'S DAY! It's just over THREE WEEKS AWAY! Just like last year.. I've been chanting this song LOL. Looks like there will be a bunch of us in the Sasuke Maniac forums waking up at early morning (2:36 AM Eastern time) on Friday, January 1st to watch Sasuke 24 air live.

PLEASE SEE THE SASUKE 24 SCHEDULE PAGE FOR ALL OF THE AIRDATES!

There are specials starting from December 28th!

Again just like last year Lost in Ube and I will be scouring the Internet to find what we can. With Sasuke Maniac off the air.. we have to rely on blogs, websites like Sasuke Mania and Monster 9 and eventually TBS when they put up their official Sasuke 24 page, etc. to find out our information! As of today we have a few people already confirmed and/or rumored to be coming, PLEASE NOTE: These names, even the confirmed one, can change due to unforeseeable circumstances - so the list is created as a guideline using past information and what has been posted in blogs in Japan. It is for fans wanting to know who might be participating. 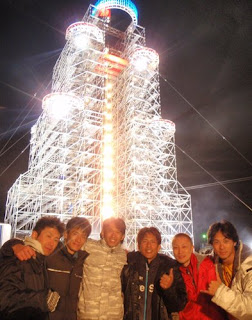 Charming. w/out your blogs the experience and anticipation wouldn't be the same. Does that necessarily mean it would be not as good w/out rambling rican??.... No.. :) but that's not to say I don't enjoy your goodies.

Thanks ;) I tend to rile myself up when I start putting this up. As per tradition I put it up when I get Lee's confirmation.. dunno why.. just seemed to happen each time.. LOL!

Can't do anything but quote venus.
I'm starting to feel funny too...taping tomorroooooooooooowwww!!!!!

I'm getting excited, too. Taping begins at 5:00 PM my time. Ganbatte kudasai, All-Stars!

let's hope...I'm sending a good luck message to Nagano, anyway. Who knows, it could turn in something like "Oh no I'm on the top but I can't even lift my arm to touch the button...wait...there's people who thought about me...sent me messages...I MUST lift my arm!"
And there comes the second kanzenseiha LOL.

I sent messages to my two favorites, Shingo and Yamada, earlier in the year for their birthdays. I hope that gives them some inspiration and encouragement. I want to see them achieve kanzen seiha.

LOL Arty :) He surprises me sometimes with messages though he is good at NOT giving away spoilers /groan :p He's been taught well by TBS.

Oh Cool Tiger :) I hope you hear back from them.. otherwise though you know you send them good luck messages!

Awesome new pic. I'm glad Akiyama and Shiratori were there. Yamada isn't in the pic, but I'm sure he was there. This is the first time in over three years that all six of the All-Stars have been at Sasuke at the same time. That's great.
Akiyama shaved his head. I wonder why he did that. It's winter. It's cold, especially up where he lives.

I had kittens when I saw it on Lee's page.. I was going OMG!!!!!!!!!!!!!!!! Was fantastic to see Bunpei after so long!!! Akiyama (I'm humming the theme to Kojak).. if I didn't know any better.. it looks like he dyed his hair too! LOL I have no idea.. I'd be freezing too but hey he wants to try something new :) I'm so excited!!!!!!! Sasuke 17 was the last one! Wow.. time flies. And yes I'm almost positive Yamada is there but didn't post for that specific pic. He comes and goes a lot on his own and Lee does take pictures with him but it's usually by himself. We won't see any more 24 pics until it airs in Taiwan so we have a couple months still.

It's really awesome that all 6 of the All-stars were there. I hope they all did well. I'm still counting on kanzen seiha from Shingo and Yamada.

Isn't the tower lit up like that all beautiful? It's inspiring :)

I have a new nickname for Akiyama. It's "Cue ball." What'cha think?

Dang, no Dai? I just love that little elf. Drooling in anticipation of the broadcast. Go Bunpei!!! And Kewpie Doll!!! And Nagano, of course. :)

Sorry, meant to write "You think"

LOL you did read my mind.. it's really light.. I figured he dyed it went OMFG and shaved it off since he was going to Sasuke.. LOL! That would be funny if it were true.

kaaawaaaiiiiiiii 6/6 All-Stars! I Already went mad on a couple of places so I won't spam my newborn kittens here. Still, every time I see that pic I start jumping around.
It's been a LOT since the last time I've seen Bunpei, I already started to worry about him, but here he is! Yay!

With each passing day I get more excited. Just updated the other page with information on dates on specials, yada yada.. I'm having kittens all over again!

Thanks Ube & Arsenette for the updates!

btw,
1. Can't see what is wrong with Akiyama's hairstyle. Why is everyone going on & on about it? I have the same hairstyle. It is crew cut ( blade No.2 )

2. the joke about Nagano can't lift his arms by Arty ( got to be that funny kid again ), i LMFAO!

Hi, thank you Arsenette for doing this, I've followed this for a long time and admired your efforts (and signed the petition). One potential correction I throw out to all of you, though. I thought Akira Omori was in one of the Sasukes between 15 and 20, probably 20 (for the 20th anniversary show). Maybe Ube or someone could confirm?

Also, I'm hoping for news that any of the Americans participated, too. I'm a bit annoyed sometimes by Levi's antics as well, but not that much--especially seeing an older episode seeing another Japanese participant doing a back-flip during their run(I don't remember who though).

Cons:
1. 4. No Levi ( no one for you to bitch about this time, Arsenette ) {LOL Sato is still there :D Aahahahahha}

Hubby has a crewcut too :) Nothing wrong with that but I agree with Chaki.. I think he was trying to cover up a bad dye job :p LOL!!

Thanks K! I don't believe Omori was in there for several reasons. He mentions himself he hasn't been there in ages and the other is because of the wiki. Here's the one for 20. http://sasukepedia.wikia.com/wiki/SASUKE_20 The people working on it have tried really hard to get all the competitors (even the cut ones) and I don't believe TBS would have cut someone as well known and loved as Monkikki. I'm happy he came back in 23 and he is confirmed for 24. Hopefully he continues the trend and is another regular!

I did mention before with Levi's flipping and his defenders in general that he wasn't the only one who has done it but he is the first of a true contender to do it. Usually joke competitors with no other reason other than to entertain the crowd because the have absolutely no chance in Hades to beat the course would revert to antics like that. Levi wasn't/isn't/shouldn't be put in that category.. especially since he showed restraint and was liked in Sasuke 20. Even the All-Stars were annoyed by the ridiculous antics.. most especially after his exit from Sasuke 23.

Thanks for responding, the first time I saw Levi flip, I chalked it up to naivete, but the more he flips (like on the American challenge on TV this weekend), the more I wonder (and I agree, I hope the All-Stars talked with him about the dive in the water-that definitely bothered me more than the flips). Maybe it's okay to behave like this in the U.S., but I agree for Sasuke, it's better to "Act like you've been there."

Now I'm questioning my own memory on what I saw with Akira as far as which competition (when they repeat it on Comcast's Channel 1 again, I'll see if I can catch which competition they're showing). It's interesting, though, I thought he was a bit of a ham to the camera the first few competitions, but he's a comedian, and he mellowed gradually (I agree, I look forward to seeing him now, although he's over 40 now-I feel old typing that).

Hey no problem :) and yes I do feel old myself LOL!! I'm only a few years younger than he it but still it's cool to see him back and competing. I really hope he beats the Jumping Spider this time. He spent the last month posting on his blog about how excited he is and how he has been training. He has seemed to mellow down a bit. Suits him! :D Just 2 1/2 weeks to go to find out how he did in 24! Boy am I going to be tired though.. LOL!!