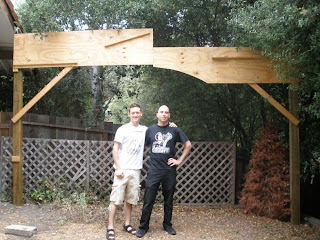 Levi Meeuwenberg (Sasuke 20-22) and David Campbell (Sasuke 22) training together, August, 2009 ©David Campbell
There's much anticipation here in the USA for Sasuke 23 now that we are about a month away. As I was working on my last blog (Part 1 - Japan) it had come to my attention that the same weekend was a busy weekend for quite a few people here in the United States as well. Part of the anticipation is due to a brand new competition (finally..) that G4 is airing sometime.. I don't know when.. actually.. Gah I feel myself digressing already.. stay on target.. Anyway.. American Ninja Warrior (formerly American Ninja Challenge or ANC.. this one is technically ANC5) or ANW as I call it (sounds like a wrestling league.. or as someone reminded me.. Root Beer.. ) is set to start picking their top 10 later this month. 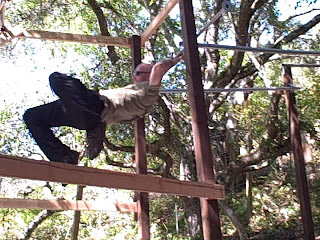 David Campbell training on his replica Slider Jump - August, 2009 ©David Campbell
Anyway I was talking to David Campbell who is working on answering his questions (don't tell him it was back in June.. :p LOL Just Kidding David.. I DID tell you to take your time on it) he told me he was training as well for ANW since he was not going to get a free pass to Sasuke even though he was the winner for ANC4. As a matter of fact, neither was Levi or anyone else who won previously. David sent me pics he took of his training session that included the pain in the ass obstacle that almost took out David the last time and pwned Levi last time.. the dreaded.. Slider Jump. 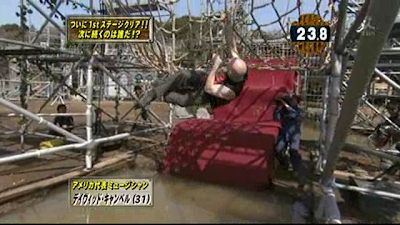 David Campbell getting tangled in Sasuke 22
Getting pissed that he got tangled there the last time, David had the obstacle reconstructed so he can practice as many times as he could so he wouldn't do the same mistake. I'm sure just about every Sasuke wannabe is salivating at having that as a backyard... 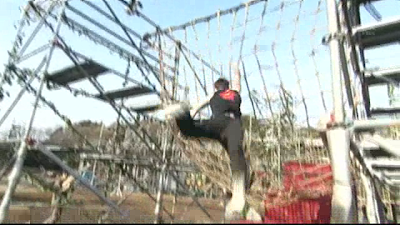 Levi and his date with the Slider Jump during Sasuke 23
Levi I'm sure was trying to get as much practice on that sucker as well after his Sasuke 23 run (and about oh.. what.. 10 other people? I lost track.. I'm sure someone has the exact number.. I .. don't care :p A lot!). 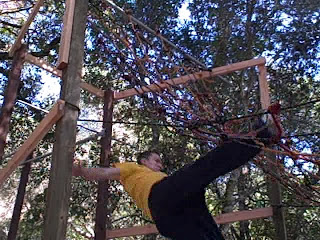 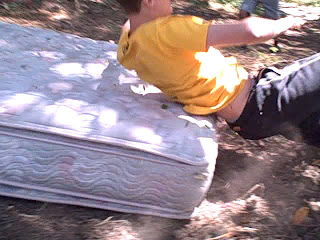 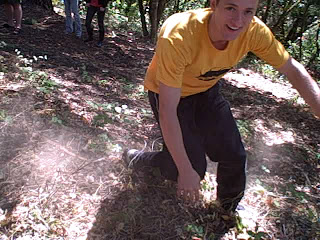 Levi Meeuwenberg - August, 2009 ©David Campbell
I'm sure he made it later but I found these funny (and so did David apparently :p) Glad to see Levi was still smiling because frankly.. that look like it hurt.. and I'm sure the mattress was moved.. 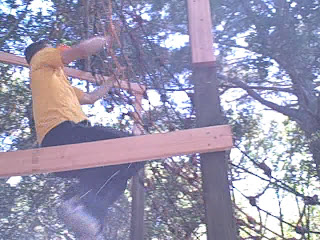 Levi Meeuwenberg - August, 2009 ©David Campbell
Ahahahahahah okay.. This is for David.. Here's a successful Slider Jump with Levi on it :) Tehehehehheheh Yes I did say he probably did it :) The falling pics were funny though you have to admit :p 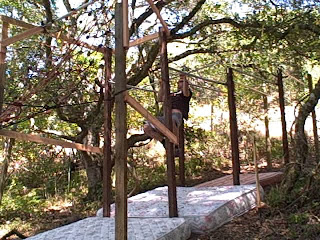 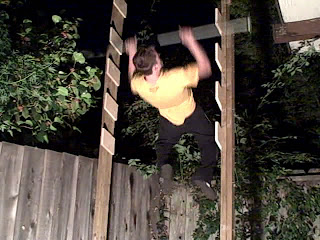 Levi Meeuwenberg - August, 2009 ©David Campbell
Keep an eye out for my blog later in the summer for David' Campbells blog on Sasuke 22. Until then cheer everyone on as they try out for Sasuke 23! 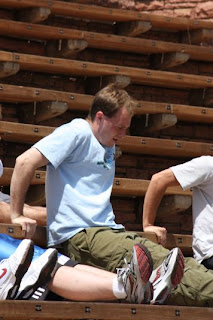 Another set of pics can be found here (there are actually a lot.. Thanks Jason!) of the Colorado Parkour Jam that happened last week. A couple friends of mine (Jason and Chris) went and took pics and even participated in the event that included Team Tempest's Brian Orosco (Sasuke 20-21) and Luci Romberg (Sasuke 21-22) and Levi Meeuwenberg as well.

Slideshow ©vxjasonxv
Christopher Christensen 2009
Chris (or UncleSam as we know him in most post boards) is also trying out for ANW this year. Above is his entry video. Yes, he's my sentimental favorite. There are 10 spots and I hope he gets one of them to Sasuke 23! If you are in the area cheer everyone on later in the month! 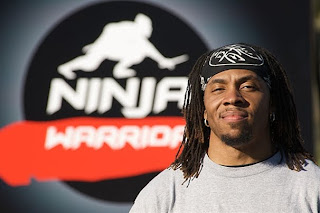 Ruselis Perry - March, 2008 (ANC2) ©G4TV
Also training for ANW is Ruselis Perry whom we affectionately call Blackie Chan. Most remember him from ANC 2 (my favorite of his entry videos) and ANC 3 submission. He's back for ANW (ANC5) with a new entry video. 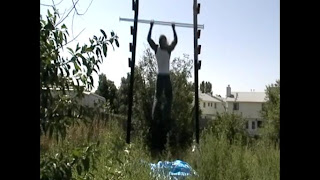 The Salmon ladder in this video clip is heeeeeeeeeavy and haaaaaaaaaard.. Both Chris and Rus can attest to it. The rungs are further apart and the bar is heavier than normal. Rus got to the second to the top rung on this attempt. Chris built it that way.. he is.. eville..

Last but not least is Ryan Stratis. I call him Straticus (his username on post boards) but you can call him OMG-IF-HE-DOESN'T-MAKE-IT-THE-COMPETITION-IS-FIXED.. sorry.. LOL Dude.. this is his FIFTH time.. count them.. 1, 2, 3, 4, 5.. here are actually his ANC 3 and ANC4 videos. I swear he HAS to at least get a crack at Sasuke.. Good Lord.. how many times does he have to be a damn finalist?? Good.. grief..

Makoto Nagano visits the United States, September, 2008 (Part 1 of 4) ©Ryan Stratis
On top of that.. He went to West Palm Beach, Florida just to meet Makoto Nagano AND he took videos of it to share with the rest of us who couldn't go to see him the only time he came to the US back in September, 2008. (Part One, Part Two, Part Three and Part Four) 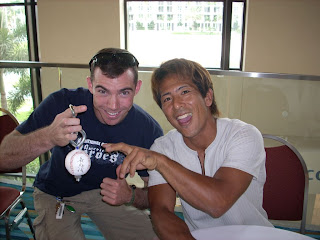 Ryan Stratis posing with Makoto Nagano - September, 2008 ©Ryan Stratis
So when you watch ANW this Fall.. winter.. when the heck is it actually showing? Oh nevermind.. when you watch Sasuke 23 just remember the hard work that everyone went through just to get ON the show. Good luck to everyone in Japan and the United States!
Posted by Arsenette at 5:38 AM

I wish good luck to UncleSam as well!
Damn, I remember the last time I landed on my back like that...poor Levi!!
I badly hurt my sacrum falling down the stairs and coudldn't run for a week beacause of the pain.

OMG I just noticed I didn't look at the Makoto&Straticus picture at all. First...I think I never saw Makoto with a cutie face like that (except the pictures with Kaiou). It's not his usually...how did you call it...girly giggle? It's something like...kawaiiiiiii!!
Second...isn't he posing with his fingers near that baseball (?) like as he was approaching to a globe grasp?
Or perhaps, as usual, I'm too sleepy to meditate on theese things...heck, it's nearly midnight here!
Goodnight =P

Yes he was approaching it like the globe grasp since that's what Strat was showing him :) He built a globe grasp using those baseballs. He seemed to like it and said to him he didn't think of that .. so he had to use billiard balls to build his for the Maguro festival.

Oh.. otherthingsthatInotice™.. did you notice he had gum in his mouth? He tucked it in his back molar.. LOL (Makoto I mean)

It's true!
uhm...he actually signed the baseball!
Suddenly I want to go and steal some baseballs from straticus' globe grasp xD

I am a victim of the quirks of the english language!

"A couple friends of mine (Jason and Chris) went and took pics and even participated in the event that included Team Tempest's Brian Orosco (Sasuke 20-21) and Luci Romberg (Sasuke 21-22) and Levi Meeuwenberg as well."

I did not participate. I'm much too unhealthy for that. The blisters I mentioned were solely from way too damn many damn hours standing/walking.

Also, is Curtis not your friend? :<

LOL Yeah that was a weird sentence.. oh well ahahhahahah (Ditto for me.. I can never participate in anything like that...)

I don't know him very well at all - only by association and only now was he posting in the same places I did. Which is why I didn't include him in the post.