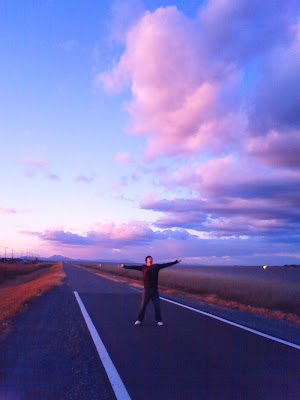 I am KING OF THE WORLD! errr, Road, errr SPLAT! (LOL thanks snowy for that quote!) ©Shunsuke Nagasaki 2009
.
Got an email today that perked my interest :) Been having issues sleeping lately (in the right time zone) so I always miss these things. Turns out my friend snowy was iced in.. and she found something in her Internet travels! Boy was I happy :) Seems that in late December Shunsuke Nagasaki decided to open up his own blog! I love the picture above :) that's the kind of crazy stuff I'd do! Great sky and he's right! Now I get to check on blogs daily from him, Naoki Iketani and Daisuke Miyazaki :) They seem to update them fairly quickly and have the cutest mondane things that I find amusing :) 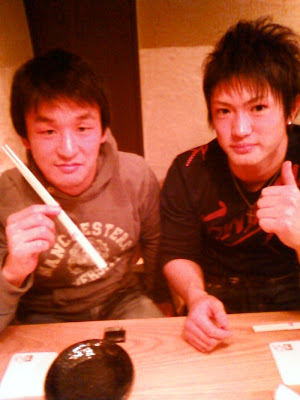 Recently Tomohiro met with Shunsuke which is cool! I would hope that means Shunsuke might be back to Sasuke? One would hope! Last year he mentions he was injured and that affected a lot from his schedule. He was severely dissapointed with last year. Hopefully with a great showing in National Championships late in 2008 that things are looking up for him! And hope that he does end up coming to Sasuke 22! I would think Tomohiro would be back considering his great showing in his debut. Until then, I'll be passing popcorn and watching the blogs :)
Posted by Arsenette at 11:52 PM

Sorry but Dai-chan is my guy though.

Yes yes yes you saw him first :D teheheheh he does have the cutest blogs though! (Dai I mean) and his profile picture is just hysterical! Just nice to see more of these guys going public :) For us at least here in the US :D

Wow Snowy! You are da woMAN! Finding this for us. I'll be keeping my fingers crossed that he appears at the next Sasuke. Of course, that will make it difficult to do anything else, but for my wonderful friends to get to see their little trampoline boy... it will be worth it. :)

Isn't she awesome!? :D She's also exceptional in keeping up with his results and such in the trampoline world! Amazing her tracking all this stuff in pages riddled in kanji!

Hey Rufus :) LOL You caught me as I was uploading another blog :P And YES he should come back! Bring Takamasa too! :D

Awww, stop. You're makin' me blush. Ain't no big deal--I got into it while trying to figure out Japanese twirling websites and blogs. It was a small step to add trampoline stuff. I'm not good enough to deal with Japanese bluegrass yet, but maybe this year:)Translation software is a wondrous thing.

Tehehehehe I get praises for things I didn't even DO sometimes because it's in my blog. I just prefer giving props for the person who did the research :) Fun isn't it? He takes great pics! There's one more guy who knows how to work the friggin' complicated Japanese cellphone! LOL