Reasons why I wish we had more television coverage here of Sasuke Related .. stuff..

Announcement of participation of Makoto Nagano and Toshihiro Takeda at the Beach sports Miyazaki Prefecture Competition on July 26, 2008

On a personal level the past couple days have been a little stressful with my best friend's father going in the hospital again and a friend I met online having her own life threatening physical issues. So it was nice to get a small distraction when I logged in to Sasuke Fans this last night when I got home from the hospital. A heartfelt thanks to the well wishes for speedy recovery! Your support of my friends is very much appreciated!

Last week when promoting Sasuke Maniac, TBS promised "Hot men's thoughts and is…!?".. I felt giped that we didn't see hot men... until I saw a post in the SasukeFans website :) Ube was so kind as to link us something he found... Nagano and Takeda - Beach sports Miyazaki Prefecture Event... Uhmmm.. damn? Okay okay.. follow me on this.. We have never seen Nagano in shorts.. have we? The closest we've ever had were those goofy rolled up pants when he went to Kunoichi 7... 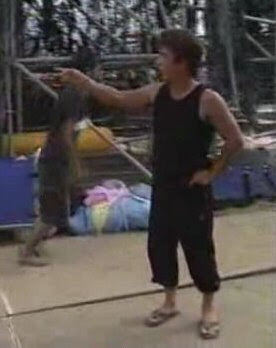 And of course we have already seen Toshihiro Takeda in shorts MANY times... including various training videos of him between Sasukes... 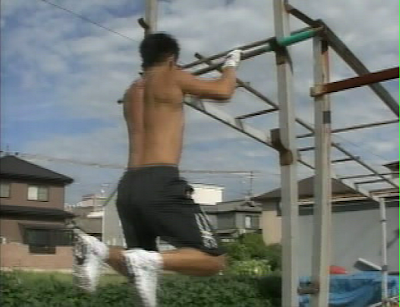 Okay.. first it's a pier off some place called Sunbeach. Ube was so kind as to find links and locations and stuff like that. The event is a part of Phoenix Seagaia Resort (gorgeous looking resort btw.. nice website) presents "Pirates' Adventure Beach". Nagano did Viking.. with the norse gods.. why not go after the Pirates? AAAAAAAAARGH.. Okay.. another link to this Pirate's Adventure Beach page... wtf is up with the technicolor burgers??

Anyway.. let's see what Toshihiro and Makoto will be doing.. are they competing? I sure as heck HOPE so... I'm using bablefish translation folks so bear with me:

Six of the barrier system, stopping in tournament competition.

(1) BEACH FLAGS (beach flags) - tell from the state of sleep, depression, 15 m at a speed contest scramble for the flag (WTF is up with this translation?) Okay.. Ube again was kind enough to provide information on what these things look like. Apparently Monster 9's show Sportsman #1 has a couple of these events already part of their show. 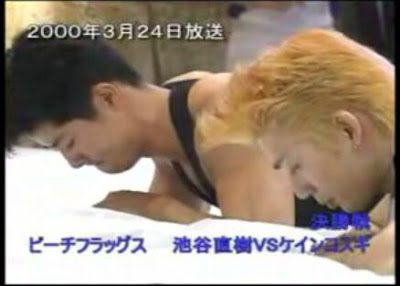 As seen from this YouTube Video it's a very simple thing. A bunch of people lie down on one end of this pool of fluff.. no one sees where they place a red flag. (see above how Iketani and Kosugi wait for the sound of the gun to go) When the gun is shot, they all get up and scramble to find the flag in the fluff. Whoever gets the flag wins. 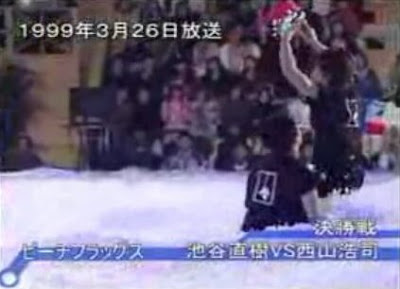 (2) POWER FORCE - Each other on a rubber tube to pull one another and from one flag to get the power and speed contest (Tug of War folks). Again Ube corrected me on this thing. It's not quite your tug of war contest I grew up with. As seen on the videos demonstrated in 2000 (both March, 2000 and October, 2000) in Sporstman #1 (Kane Kosugi vs. Shoei) - 2 people put on jump suits tied to each other with a bungee cord.. 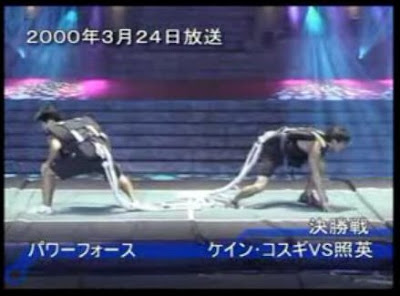 When the gun goes off each run away from each other to reach a buzzer at the end of the runway. Only the power of the competitor can determine who will arrive first. 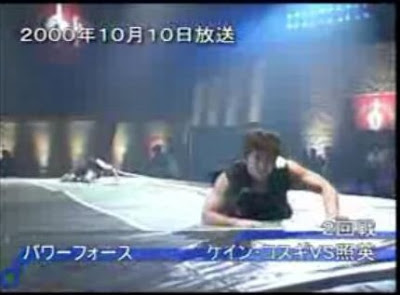 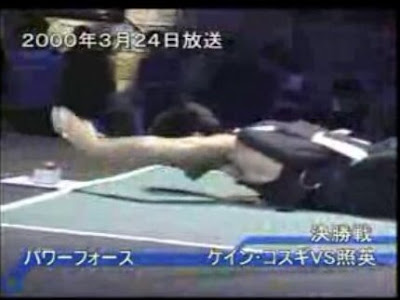 Semi Final - BAMBOO RUNNER - Float on the sea width of 90 cm in length 8 m bamboo raft of six come back in the running speed contest.

Final - BEACH JUNNGLEGYM - TBS television is known for his "SASUKE" training machine is the venue! so far is only 10 fit men and women. Speaking of things I want to see in Sasuke Maniac... As I mentioned in a previous blog, Makoto Nagano went to the grand opening of Muscle Park's new Sasuke Park. I'm ecstatic that they did put pictures up in high quality! Too bad he didn't come in jeans this time.. /sigh Let's hope they put something in Sasuke Maniac about this.... oh please...
Posted by Arsenette at 12:14 PM

This is so awesome! Wish we could see it, but we'll have to see if it shows up on Sasuke Maniac. I don't think I can find a feed of Miyazaki Radio and Television:)
Also keeping your friends in my prayers that they have a good outcome from their troubles.

The burgers are supposed to be pirate colors I guess (red and black). They sound spectacularly unappetizing. The black has squid and goma sauce. The red has kim chi and some other stuff.

SHIGAIYA is the literal romanization of Seagaia so maybe the winners get free stays at the resort or something.

I totally missed the SASUKE reference in the final. I wonder if the winners will get invited to the big show?

I wish they get stays at that hotel.. looks awesome :)