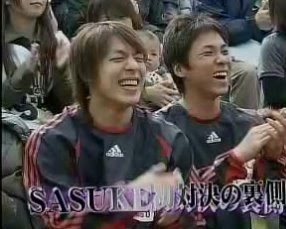 (Handabol guys enjoying the spectacle that is Sasuke 20! - Daisuke Miyazaki is the guy on the left.. trust me you will see more of him..)

Checked during the week again and they mentioned Daisuke Miyazaki .. which means they were going to show Sasuke again… what they would show I had no idea so I was about to check! Incoming Bablefish disaster.. "Reverse side close adhesion and heroical anecdote of [sasukemania] intense fighting! Handball Japanese typical Miyazaki Daisuke never conclusion just something?" So .. what does that mean? I was aiming to find out! LOL having fun with the whacked out Japanese commercials…. 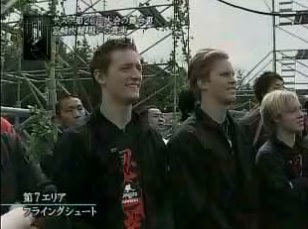 Looks like it’s Daisuke’s experience in Sasuke Maniac.. Yep the whole team's experience of Sasuke 20. First part was him watching with the rest of the contestants how the Sasuke crew did the first stage. Next was his win in Sportsman #1. Bio of how he got there, how the handball guys trained (trampoline and all) Was funny seeing them all trying to do the Jumping Spider jump and spread legs into a wall.. LOL Naoki Iketani talks to him - (Shingo in the back with Yamada walking behind him) 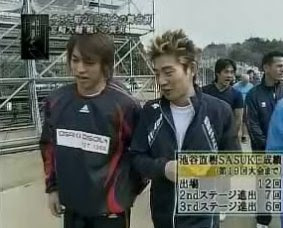 (Kewpie to Handabol guy.. remember .. I won Sportsman number one waaaay before you so don't get on a high horse.. I may look like I sway in he wind now.. and you are buff.. but I can still kick your butt..)

Rehashing the day's events as they saw them. Akiyama run.. Miyazaki looks dazed.. Dude.. that was totally the guy that won this thing first.. first handball guy.. (death by Jumping Spider).. got hurt in the run “check my arm”. More people going down.. Hey they showed Swat guy again! Yay! Sorry Michael it went by too fast and my screenshot trigger finger is much too slow.. Handball guys looking like they are having fun.. next handball guy.. (death by Half pipe attack.. he’s the one that swung back to the wall and still missed the platform back.. ) guys loved it.. 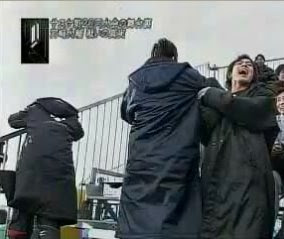 (The Handabol guys having waaaay too much fun laughing at the fate of their fellow handball guy... Your turn is coming..) 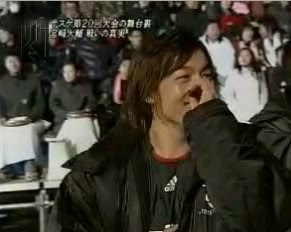 (Dude that hurt.. Miyazaki in shock over the loss of his fellow handball guy..)

Now they show the first 2 guys through to second stage.. back to another interview with Miyazaki.. Takahashi down.. Takeda times out.. more of them time out and fall.. Miyazaki now freaked.. back to running sprints in the parking lot.. push ups.. another interview.. he’s antsy.. swaying.. a lot during the interview.. getting ready for his turn.. intro.. he starts..

We are back with his run.. (death by Halfpipe attack) lost of replays of how he overshot the platform.. 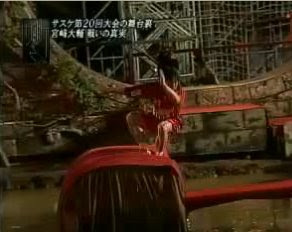 (Notice he landed a bit too far over.. and already started to lean back over the water..) 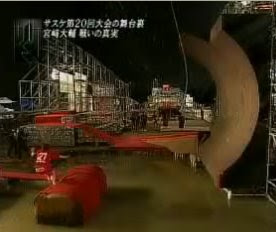 (From opposite angle.. you see the lean really evident.. poor Daisuke.. no way to save this..) 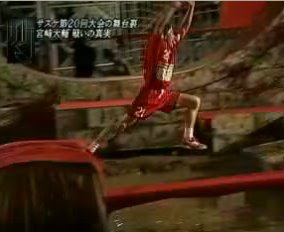 (He does a mad jump across to see if he can somehow make it to the opposite platform.. nope.. doesn't make it.. )

Utter disgust .. another interview.. Then interview with team on their experience. All bowing in thanks.

Back to interviewing Miyazaki again.. Poor guy… long day.. another interview staring at the Stage 4 tower.. credits roll. Off they roll into the night..

Remember always Ube does a MUCH better job (See his blog.. it rocks.. - link always on the top left side of my blog or Lost in Ube blog link .. Also.. my previous Sasuke Posts can always be accessed through the tags under Sasuke or Sasuke Mania ;)
Posted by Arsenette at 11:51 AM

Great job, Elsie! Thanks, I needed the laugh.

No problem :) Looking forward to the next one hoping to get my Nagano fix :D

Need a new Nagano fix! Naoki Iketani looks horrible. His strength may have gone with his weight. As always, wonderful.

Cool pics. Damn I missed it this week but thats awesome that he wants to come back for Sasuke 21. Hopefully, i figure out something so I can capture video for Sasuke Mania and post it on the site. I hope Nagano's run is next week.
--scnoi1217

As long as they didn't have multiple super slow-mo replays of me missing the trampoline.

Just remember that you made it further than most, graceful or not. Not many people can say that they participated in Sasuke, must less make it past the first obstacle.

Thanks Tricia. Actually, watching the video just motivates me to train even harder for SASUKE 21. I hope they keep the Jumping Spider, now that I found somewhere to practice on a mini-trampoline.

Oh Michael the video was short and quick (and at regular speed) so don't worry :) Besides Tricia is right! You did get a lot further and that course is friggin' hard! I know of course that if I did that I'd be hard on myself as well because that's my nature but at least you are channeling it to just training harder ;) Hope you can get there again for Sasuke 21 so you can avenge the loss at the Jumpingu Spidah!!

One interesting thing to note in those snapshots is how everyone bundled up when the sun went down. During the day it was fairly comfortable (low to mid 50s), and suddenly it got extremely cold. I'm glad my swim was early in the day, because I don't handle the cold very well (no insulation). :)

Keep training! You can only get better.

Michael, have to ask. After a dunk in the sludge, please tell me you get to clean up somewhere? It's never shown on TV, only guys wiping off with a towel. It would take more than a towel to get off some of that sludge.

They have some porta-showers set up. Hot water, too!

Okay that's freakie.. LOL no wonder Nagano has that bag with like 18 changes of clothes and shoes.. So did you meet anyone of those we see on TV often? Or were you isolated?

I was able to meet the All-Stars and other frequent participants (Mr. Hang Glider, Mr. Octopus, etc.), and we did out best to bridge the language gap. They are all class-acts, gracious, and friendly. I brought along plenty of Special Agent pins and patches for my new friends, which they seemed to enjoy.

That's awesome :) Only solidifies my opinion of them so that's fantastic :) I'm a picture person myself so I always ask if there were any :D Cool if you don't want to share.. just being very female right now LOL. That's cool you brought trinkets from your life to share. Watching older Sasuke's I've noticed that they have been very receptive to sharing the lives of each of the competitors. Everything from wearing Olympic shirts when the American guys were there from Atlanta so talking to the G4 guys and having from with the "American Ninja!". They seem pretty down to Earth and regular people instead of celebrities.

I'm happy you had an overall positive experience and with others continue to have the same experience. REALLY hope you get another chance at it in Sasuke 21!

If anyone would like to see some photos, just e-mail me:

I had always wondered by those already out of the competition looked great after a dunk in the sludge. May have other weird questions later but brain is in slow down mode - going to find some caffeine.

Special agent as in Federal or what? Curious - I work for feds.

Too cool! I'm in the federal judiciary - we get DEA, FBI, SS etc. in court with us. Never a dull moment (actually some of it is but the funny moments make up for it). You've got an interesting job.

Another dumb question (if you have an answer) - do all the men wear those long coats? See them in Elsie's pictures and some of yours too.

Wow Michael! That's some really interesting stuff you are a director of. Good Lord! You too Tricia!

Thanks for pics Michael :) They are awesome :) I promised they won't go anywhere but my computer for personal enjoyment. Always nice to have more Nagano pics. Great shots of the course too from the perspective of a competitor!

Maybe after Sasuke 20 is aired on G4 and you won't get witchhunted.. you can blog your experience with pictures :D tehehehhe okay okay I'll be good. :)

Not sure what this weekend's Sasuke Maniac wil show but will watch nonetheless. No updates on the TBS site as to content for this Sunday so I guess stay tuned.

Reference the long coats, I think Descente is a sponsor, and the All-Stars probably get them for free. I wish I'd had one when the sun went down.

I noticed a LOT of Descent jackets now that you mention it. Asics has to be another sponsor because Nagano looks like a human billboard with his T-shirts and now his Tank top with his name on it. A couple of the other guys had T-shirt with Asics on it as well the last couple competitions. Kinda nice they get perks now. Before they basically went home empty handed.

Michael needs a cheering section with cheerleaders next time so he can get perks from companies too :)

Which American? Dunno.. maybe Levi.. who knows they might show you Michael :D

I don't think my run was impressive enough to warrant a special mention like that. Also, I haven't attacked an archipelago in a while (even though many have been deserving of a beat-down), so it's almost certainly not me.

You never know what will be shown on TV. Elsie is good - if you're on there, she'll catch it. I watch it through the KeyHole TV thing and it's pretty interesting. Don't be too hard on yourself. They liked you enough to let you compete - that really says something. Besides, they'll milk Sasuke 20 until it's dry and they'll need every clip they can - keep watching the blog.

LOL Michael :) I never know what's going to be on. Hey if someone who doesn't get past the first obstacle gets famous and asked every year I don't see why you can't be asked considering you did a lot better :D