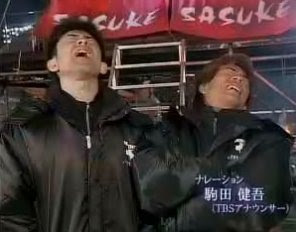 Either way. As 11:20 am my time came around I contemplated what was going to be shown. Most likely people I’ve never seen or would recognize before but still.. it’s Sasuke. With the crappy week of G4 going completely overboard and threatening people for even MENTIONING the names of the ANC competition in Sasuke it’s been a trying time. With the demise of our own Sasuke Fan site I was wondering if I would even like Sasuke again. I took a break from G4 for a while and figured I didn’t miss it. After all I’m a Sasuke fan.. not a G4 fan. I felt better after a couple days rest and am still resolved to enjoy Sasuke despite G4’s constant intervention to suppress the results already shown to the world. I still mourn the loss of our old site and it’s wonderful webmaster. I’ll never forgive G4 ever for that. 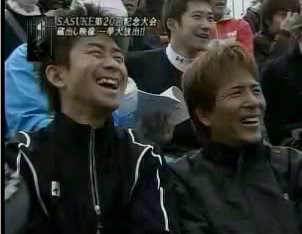 Well it started at 11:20 my time in the East coast.. Did the prerequisite OMFG moments of Sasuke 20 and then started with the people I don’t know :p 3 people were shown.. all getting pwned by the Log grip. Great some guy in a thong.. I know people that would prefer watching it.. I’m not one of them :p Jumpingu Spidah didn’t care so it ate him. Baseball player got eaten by Log grip as well.. Another baseball player – this time with a Giant’s uniform (Brett shown in the background) – didn’t matter.. the Log Grip was hungry and demanded another human sacrifice. Ah there were girls on the course.. Girl in white Karate suit was eaten by the sextuple step.. Next girl also had same fate.. last girl.. great.. she took off her shirt and flashed crowd with her miracle bra.. Yamada loved that… Yay she passed the sextuple step.. She passed the log grip and Takeda and Nagano adored that.. 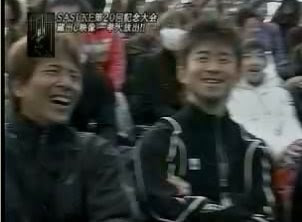 Why am I not surprised.. down she goes on the log grip.. Yamamoto, Takeda and Nagano adored that too… 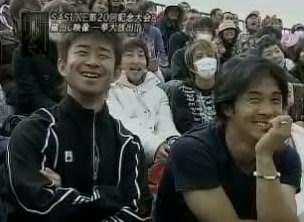 Nothing like a wet bra to raise the … spirits of the men in the audience.. 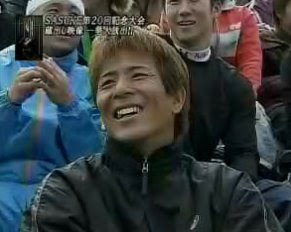 Some guy from Sportsman #1.. I’m sure Ube knows who he is! The half pipe attack had lunch sportsman #1 style. Nagano and Takeda thought that was a thing of beauty.. 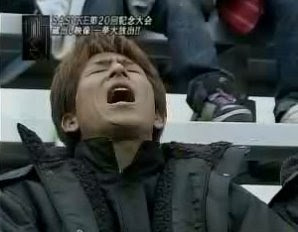 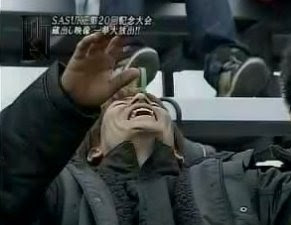 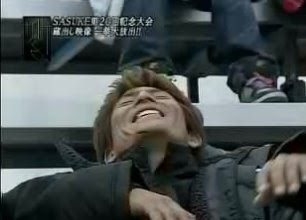 Little did they know that many more that day would see the same fate.. so.. what was it.. 15 people that missed that stupid landing? (Toshihiro Takeda still smiling about the Half Pike Attack wipeout..)

Andy’s run finished on the log grip. Brian and Levi were most displeased. 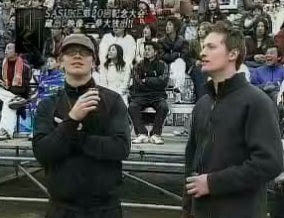 (Brian and Levi (ANC Champions) watching the action from the sidelines)

Basketball guy now.. so how does he drink of Midoriyama’s sludge? Yamamoto and Nagano seem to be fans.. Any guesses? I say log grip.. and the verdict is…. Yep.. sticky spray didn’t save him.. Now for a Football player (as it American Football .. what a shock..) he goes down on .. oh yeah.. commercials.. almost forgot about them.. NOT.. 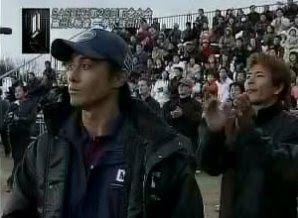 (Shingo Yamamoto (all intense.. must be close to his start) and Makoto Nagano during the Basketball guy's run)

Again.. more Daisuke Miyazaki love from the camera guy.. I shouldn’t be surprised with how much they showed him in the audience during Sasuke 20. Buy 24 and Bones on DVD.. (channeling my inner Ube).. Hmm.. In Japan penguins sell cell phones you can dance with.. God these things are wacked.. Speaking of cell phone.. there’s a game you can play of Sasuke for your cell phone.. (Daisuke Miyazaki - Handball guy - cheering from the stands.. again.. trust me.. they showed him A LOT during Sasuke 20's airing)

Oh yeah… back to the Football player.. down on the Jumpingu Spidah.. Some Olympic hurdle runner. His fate was death by Commercial again? Good lord.. I think the Master Control dude hit the button too fast.. More cell phone commercials.. Okay we are back.. Death by .. Snu snu.. no wait.. wrong show.. death by Jumpingu Spidah.. not even close.. that just looked painful.. and awkward..

Awww Thanks :) Not a lot of people were on today I know but still was nice to see the All-Stars laughing at the girls.. again.. I wonder how bad Kunoichi will be this year :)

Awesome as always! Some bling on Shingo Yamamoto! Did they show any more shots of Yamada's reaction to MN? Somthing's hinky there. Doesn't seem to be many pictures of them in the same vicinity or is that just the camera shot? MN and TT seem to be joined at the hip for this competition.

Actually no Tricia. Yamada's sourgrapes were spilled during Nagano's run (which was 100th of the day) so this was way too early to see them in display.

From the earlier pics in the Sasuke thread I saw Yamada and Nagano together at the beginning and as the day wore on he was basically goofyglued to Takeda.

Maybe he saw the light about his true personality or lack thereof or Yamada just stayed away.

Well Yamada spent a lot of time with Sato.. and I don't like Sato.. besides.. Takeda looks like a blast to hang with :)

He looks like a hoot to be around; not afraid to laugh.

In lieu of actually being successful it seems at times that Yamada really likes to suck up to the celebrities -- like he thinks he is one himself. It's one of the reasons I don't like him.

Looks like the title "Mr. Ninja Warrior" has really gone to his head. Tried to give him the benefit of the doubt about his lack of personality and blamed it on the way the show was edited but the more I see of him, the less I like. As my niece would say, he's on the pissing end of the totem pole of personality.

On a lighter note... that fourth picture down, of Yamamoto and Takeda is great. Shingo looks fine, fine, fine in that one. Love the blog, Ma'am.

SKW I'm just as surprised and HAPPY how much Yamamoto is blossoming now. Same age that Nagano started to look more "manly" if you get my drift. He looks great!

Elsie, this is awesome. I'm so grateful you did this. It's great to be able to "see" the real thing instead of what G4 wants to force-feed us.