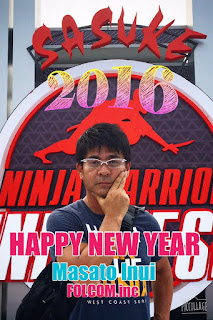 It had occurred to me that I hadn't done a blog to update everyone on the backlog of stuff that I retrofitted into previously existing blogs.  I finally got to them within the past couple of weeks but never brought it to people's attention (unless someone looked it up on their own).  I was planning to do more on the Sasuke Indonesia front but realized I'd have to talk about about 5 additional videos.  So instead, I place them all on a playlist so people can view them on their own time. I did a link back at the top of the article so they have access to the playlist.  Again, thanks to Mr. Inui for taking the time to showcase the course while it was being built and giving us an inside look at the course before the event even started!  There are a total of 13 videos that Inui produced for Nico Nico and I had permission to repost on my YouTube channel that I put up on a playlist on YouTube. 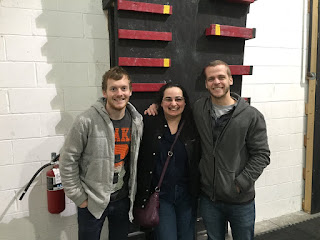 Way back in November I made up trip up north to see a friend of mine who was visiting the USA.  I referenced it during Episode 8 of the Final Stage Podcast that I did a trip up to see Perry who flew in from the Netherlands to compete at the Movement Lab gym in New Jersey.  I went to see him after the event (and had a fabulous lunch..) and had a chance to meet Chris Wilczewski.  He was kind enough to give me a tour of the facility even though it was in use (kid's birthday party). I meant to put the video of the trip I referenced during the podcast up soon after taping.. but I never did. Sorry about that!


The video for my trip to Movement Lab is finally up (yes.. very late).. Sorry for the quality of the video as it's shot from my iPhone and I have a shaky hand (too many operations lol).  It has also made me think I have to upgrade my camera at some point as my iPhone has better quality than my old video camera.. oy.. Anyway, speaking of the podcast, the latest episode (January - Episode 9) is up!  I'm now starting to use a new small opening. I'm trying to keep it short but identify the video being mine.  How do people like it? I also used it for my first vlog.  Either way, I may be going to the finals of the National Ninja League at the end of February.  It depends on a lot of things (including my health) and will update the blog and most definitely my Twitter if I do end up going. 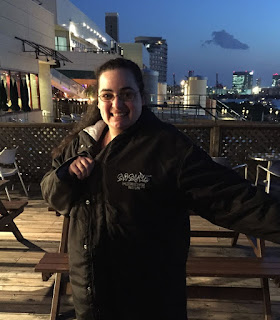 Getting a gift from Lost in Ube! ©Arsenette Reiter


Finally, I'm working on the Japan Trip videos again.  Referencing my camera before (among other things), I went into a long discussion as to why I'm procrastinating so much doing these videos on the Podcast (direct link to that topic).  Should the opportunity arise again (I hope), I vow to upgrade my equipment and do a better job. I talk a while on the subject on the podcast so I'll spare ya writing down several paragraphs on it...  Either way, while working on the Sasuke Trip, I was horrified when I came to the realization that I never vlogged about 2 days of Japan before the tournament.  So, I'm working on that and realized I didn't videos those days either!!! grrrrr.. It will be another slide show I'm sad to report.. I do sightseeing, dinner, switching hotels in different towns (to be closer to Midoriyama) and THEN it's Sasuke weekend.  It will be a massive Sasuke video which at this point I will just do as one huge video (a whole lot easier since it was just registration where I got most of the video from). Btw for those curious about the jacket, they don't sell the size but they still have small version of this jacket on the TBSi Store.  HUGE thanks to Lost in Ube for the generous gift! It came in handy and wore it for Day 2 of Sasuke 31!  Mental note, the white jacket of that same type is only for production staff so sadly... that's not available.
Posted by Arsenette at 6:44 AM